Skip to main content
Upload Proof of Vaccination
Reminder: All students, faculty, and staff must be fully vaccinated against COVID-19 and upload proof as a condition of accessing College buildings (including the residence hall) during the 2021-2022 academic year.
May 19, 2015

A Glorious Day to Graduate

Gray skies turned to a bright, sunny day at Brooklyn Bridge Park for the three thousand people celebrating St. Francis College's Spring Commencement on May 19; the first graduation held on the pier with the Brooklyn Bridge and Lower Manhattan skyline providing a stunning backdrop for the graduates.

Tvrtko is the third brother to come to St. Francis College from their home in Croatia and the second valedictorian from their family. Tvrtko carried a perfect 4.0 GPA as an Economics Major with Minors in Political Science and Philosophy. He is fluent in Croatian, Spanish and English and studied abroad in Barcelona, Spain and Buenos Aires, Argentina. He was also a member of the Model United Nations, Eastern European, and Economics clubs. 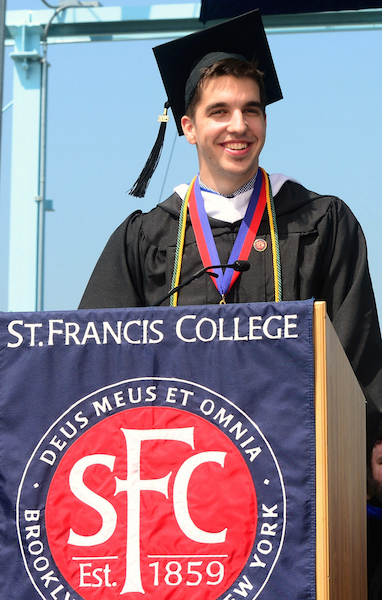 He told his fellow graduates that education at St. Francis extends far beyond the classroom. "The unmatched diversity of people, interests, cultures and opinions that New York has exposed us to has imbued our diplomas with value that cannot be quantified. Lessons of life, friendship, love and hard-work that I have learned while living in this City, I would not change for 4 years anywhere else in the world."

Tvrtko will be attending graduate school at the University of Toronto to study Political Theory. Andrija now attends Stanford Business School while their oldest brother Nikola works in digital marketing in Zagreb.

The keynote speaker was John F. Tully '67, J.D., Chairman of the St. Francis College Board of Trustees since 2007. Mr. Tully received an honorary degree for his service and commitment to St. Francis. A Brooklyn native, he is currently Of Counsel to the international law firm of Norton Rose Fulbright U.S. L.L.P. Earlier in his legal career, Mr. Tully worked in a variety of government positions before joining the Exxon Corporation. John's younger brother William and his son John also earned degrees from St. Francis and on Tuesday, he also had the privilege of giving his niece Corinne Tully her diploma.

Longtime Assemblywoman Joan Millman, who recently retired after 17 years of service in the New York State Assembly, received an honorary Doctor of Laws degree for her longtime support of the College, which served as host every year for Millman's Senior Citizen Fair. Millman's long-time advocacy to turn the Brooklyn waterfront into a park is also a big reason why the College was able to hold the commencement ceremony at Brooklyn Bridge Park.

The commencement celebration began a day earlier on Monday, May 18 with a Baccalaureate Mass held at the newly renovated St. Joseph's Co-Cathedral. The Most Reverend Nicholas DiMarzio, Bishop of Brooklyn was the main celebrant for the Mass. Bishop DiMarzio told the students that graduation is a "special grace moment" in their lives. He asked "that you take from it good memories into the future so that the education you have received at St. Francis College will be something that you will remember; the values communicated will be yours for life."

Among the students who graduated are:
Jaymee Veney is a double major in Criminal Justice and Psychology. A member of the Duns Scotus Honor Society, Jaymee was also in the Psi Chi International Honor Society for psychology, the Psychology Club, the Student-Athlete Advisory Committee and worked on special events at the College.

She also led the Women's Basketball team in scoring and rebounding, helping propel the Terriers to an NEC Championship and the first ever NCAA Tournament appearance in St. Francis history. The team did much more then play basketball well, they also finished two of Jaymee's four seasons with the second and fourth highest G.P.A. among Division I Women's programs.

"I've definitely enjoyed my time at St. Francis and have loved all the opportunities and activities that I've been able to do outside of basketball. In my college years, I've really found myself and become more stable and happy with who I've become."

Jaymee will be attending graduate school at Touro College before becoming a teacher with Success Academy Charter Schools.

Nicole Cisek & Vincent Pagnotta continue the tradition of excellence in Accounting at St. Francis College. They both graduate from the 5 year combined Bachelor's and Master's Degree and like their classmates will move on to excellent positions in the business world. Nicole is an Accounting Major and president of the Accounting Society. She interned at JP Morgan Chase and then at O'Connor Davies where she will begin working full time after graduation as an Associate Auditor. "It's the people we meet along the road that help us appreciate the journey. Thank you to my friends and professors for being part of my journey at St. Francis College. I will cherish you and these memories we share forever."

Vincent was Vice President of the Accounting Society and worked part time at a small CPA firm. "From the amazing professors I've been lucky enough to be taught by, to my classmates whom are some of my closest friends; my experiences and memories from my time at St. Francis College are ones I wouldn't trade for anything." He has accepted a position at PricewaterhouseCoopers in assurance. Other graduates will begin working at KPMG, Ernst & Young, Healthfirst, and other companies.

A new tradition of excellence begins this spring with the first graduates from the revitalized Health Care Management Major. Under advisor Michele Montecalvo, five students have completed the requirements for their degree. Brittney Mansfield interned at Project Achieve, a part of the New York Blood Center as a Clinical Research Intern facilitating National Institute of Health (NIH) behavioral and clinical research studies Nesly Destin interned at Interfaith Medical Center. He interviewed every physician within the Interfaith network to create a Patient Resource Guide. Afari Owusu interned at the New York Life Insurance Company as an entry level Health Insurance Sales Agent. He will work for New York Life full-time upon graduation. Kristina Primavera interned at North Shore Long Island Jewish Medical Center as a Patient Portal Ambassador guiding patients through this self-service online health management tool that is a critical component of the Affordable Care Act. Kira Evans interned at the New York Eye and Ear Infirmary, the oldest and most prominent specialty hospital in the United States. She organizes the Human Resources components for the facility directly under the Volunteer Coordinator of the Infirmary. She was recently awarded the St. Francis College 2015 Healthcare Management Medal of Honor for her leadership and academic efforts.

Honorary Degree Recipients
John F. Tully '67, a Brooklyn native, is currently Of Counsel to the international law firm of Norton Rose Fulbright U.S. L.L.P. He received a Bachelor of Arts degree from St. Francis College in 1967 and attended law school at the University of Notre Dame and The Faculty of Laws University College, University of London, obtaining a Juris Doctor degree from Notre Dame in 1970. Mr. Tully then spent seven years in the public sector as an Assistant District Attorney in the Homicide Bureau of the Manhattan District Attorney's Office, a trial attorney in the New York Regional Office of the United States Securities and Exchange Commission and an Assistant Attorney General in the Organized Crime Task Force of the New York State Attorney General's Office.

Mr. Tully joined the Exxon Corporation including assignments in New Jersey, Louisiana and Texas. He retired from Exxon Mobil Corporation as the Assistant General Counsel responsible for Litigation in 2004 and returned home to New York. Mr. Tully has been a member of the Board of Trustees of St. Francis College since 2005 serving as Chairman since 2008.

Joan L. Millman represented the 52nd Assembly District in the New York State Assembly from 1997 until her retirement last year. A life-long educator, Millman spent over three decades working on behalf of New York City's children prior to entering the Assembly where she was a leading advocate on senior and educational issues and for consumer rights. She served as Chair of the Assembly's Standing Committee on Aging as well as the Assembly Committee on Election Law where she worked to increase access to voting, limit the influence of special interests in elections, and level the playing field between political candidates. Assemblywoman Millman was an early advocate for the creation of Brooklyn Bridge Park and worked to revitalize the entire Brooklyn waterfront. She has been on the forefront of the struggle to clean up the Gowanus Canal and adjacent properties, led the fight to keep Engine Company 205 open, and has also been a leader in the fight to save Long Island College Hospital; in both the firehouse and LICH campaigns, Millman was arrested protesting the proposed closures.

As an Assemblywoman, Millman built a reputation for integrity, independence, and compassion – qualities which she knows will also be a hallmark of her successor Jo Anne Simon.