Skip to main content
Upload Proof of Vaccination
Reminder: All students, faculty, and staff must be fully vaccinated against COVID-19 and upload proof as a condition of accessing College buildings (including the residence hall) during the 2021-2022 academic year.
Academics
March 14, 2009

All City Concert Choir Performs: A Reunion of Song

Part reunion, part roast but 100% singing spectacle, the All City Concert Choir reclaimed its perch atop New York City's choral society on Saturday, March 14 at St. Francis College with a two hour concert celebration of the choir and the man who conducted them for decades, Dr. John Motley. (Watch the Full Concert: Act I / Act II)

More than 70 members of the choir, from as far away as Puerto Rico, returned to Brooklyn and after only two rehearsals took the stage with barely a hint of the years that had passed since they last performed together. 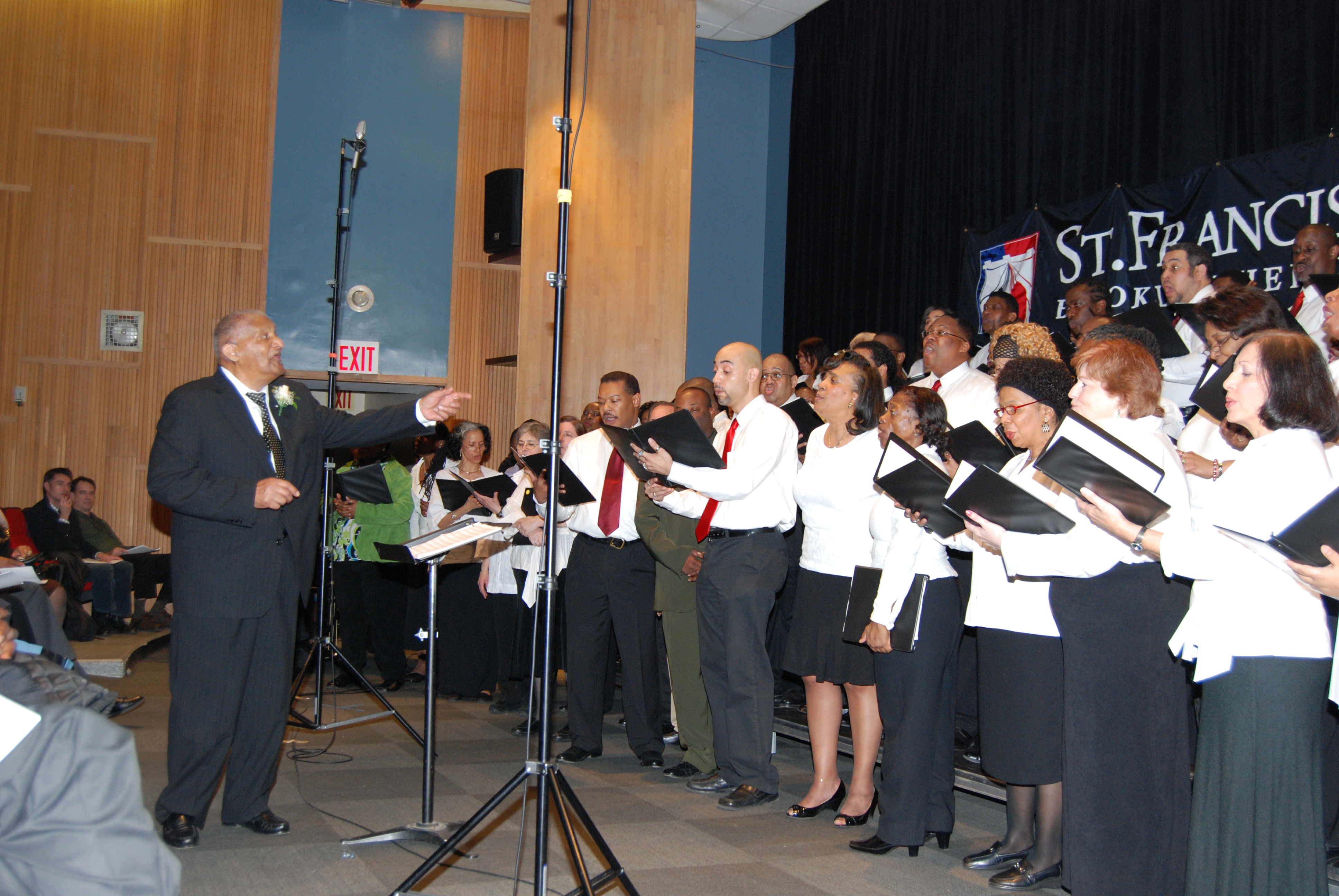 "The memories came flooding back and it was as if we were all 17 again," said long-time member of the Choir Patrice Edison, an Assistant Principal at P.S./I.S. 104 in Bay Ridge and who also helped organize the concert. "Seeing the delight and passion in John's eyes was the true blessing of the event."

The event, the inaugural St. Francis College Chancellor's Concert, also gave the audience a deep look inside the camaraderie and friendships that held the choir together. Choir members used the time on stage to needle Dr. Motley at every turn, showing their love for a man who cared for them like a father. Between songs, members shared anecdotes about everything from the amount of time they spent rehearsing, including on subway rides to and from practice, to a kiss on the cheek one woman received from Golda Meir after singing Yerushalayim Shel Zahav (Jerusalem of Gold) at the Brooklyn Museum. 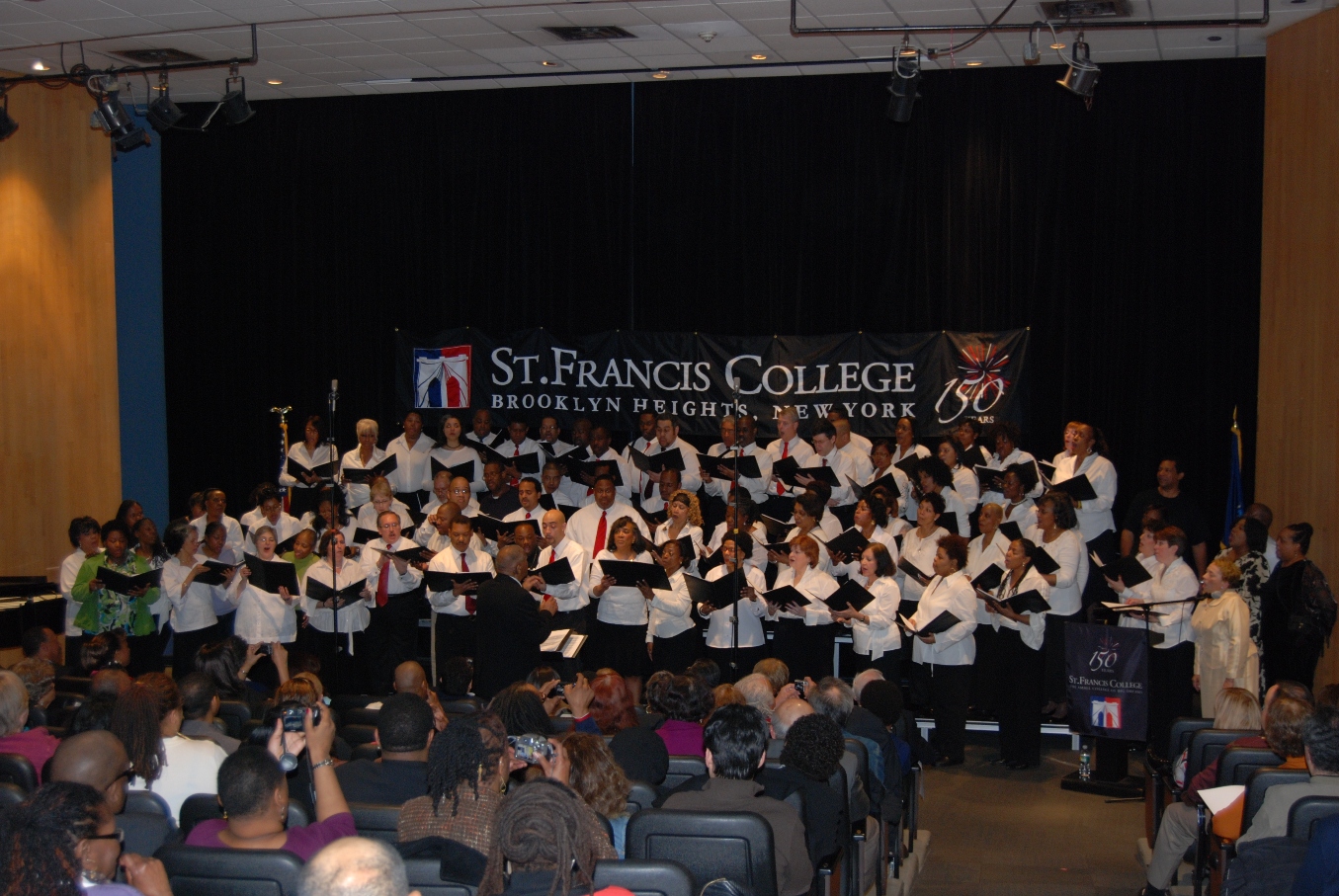 Several of the chorus members have gone on to musical careers of their own in opera, jazz and classical music, including conductor Julius Williams, a Professor of Composition at Berklee College of Music in Boston, who arrived in Brooklyn the afternoon before the concert after an extended engagement in Prague. Due to illness Janice Dixon, an accomplished opera singer based in Germany was unable to attend but promised to come to New York in the future to perform a recital with all proceeds going to a scholarship named for their leader and mentor.

"Seeing how successful my students have become and listening to them talk about how the All City experience impacted their lives brought me great joy," said Dr. Motley.

In the late 60's Dr. Motley, then the Director of Music for the New York City Public Schools pulled together a group of 50 singers from the existing All City High School Chorus and formed a traveling concert choir. For the next two decades, that group sang at some of the most prestigious locations in New York City; from extended runs at Radio City Music Hall to Carnegie Hall and Lincoln Center and at the opening of the Twin Towers. They performed for everyone from President Jimmy Carter to Israeli Prime Minister Golda Meir and the Shah of Iran, Pope John Paul II, the Apollo 14 Astronauts and for Mayors Abe Beame and John Lindsay. They also sang with musicians like Dizzy Gillespie and opera singers Marian Anderson, William Warfield and Camilla Williams. The Choir hosted TV specials on WCBS, WPIX and WWOR where they appeared numerous times on the weekly John Lindsay program.

"John and I have been friends going way back to our time with the Board of Education," said St. Francis College Chancellor and former New York City Public Schools Chancellor Frank J. Macchiarola '62. "I wanted to host this concert to acknowledge the great work he did back then for so many of our students and the work he continues to do here with the St. Francis College Choir and at the Grace Congregational Church of Harlem. He showed so many of us the positive impact music can have on a young person's life. This is the least we can do to pay him back."

Money raised through tickets sales and ads in a special journal for the event will go towards the endowment of the John Motley Scholarship at St. Francis College.