Skip to main content
Upload Proof of Vaccination
Reminder: All students, faculty, and staff must be fully vaccinated against COVID-19 and upload proof as a condition of accessing College buildings (including the residence hall) during the 2021-2022 academic year.
Academics
April 24, 2009

"St. Francis College leveled the playing field for me in life," said Michael J. Gibbons '62, the recipient of an honorary doctorate from the College, one of the many people honored as part of the annual Charter Day celebration on Friday April 24 commemorating the day the College received its charter from New York State and officially became a degree granting institution.

Gibbons, the recently retired Executive Vice President and General Manager of Estée Lauder and this year's Grand Marshal at the St. Patrick's Day Parade told the students that the opportunities presented to them by their Franciscan education are boundless and he is very respectful of the current students who were being inducted in to the College's Honor Society and receiving Dean's Awards.

Sonia Gutkin '09, the President of the College's Duns Scotus Honors Society, used her double major in Political Science and Economics to dissect the importance of the Honors Society. Gutkin talked about the value in building social and political networks in student organizations and on the economic side she pointed out that, "investing time and money in education and exerting extra effort to help others... not only [expands] your personal profits from your investments but also you contribute directly to the gross domestic product of the country and the world." Gutkin then formally inducted the 15 newest members and two new faculty members. 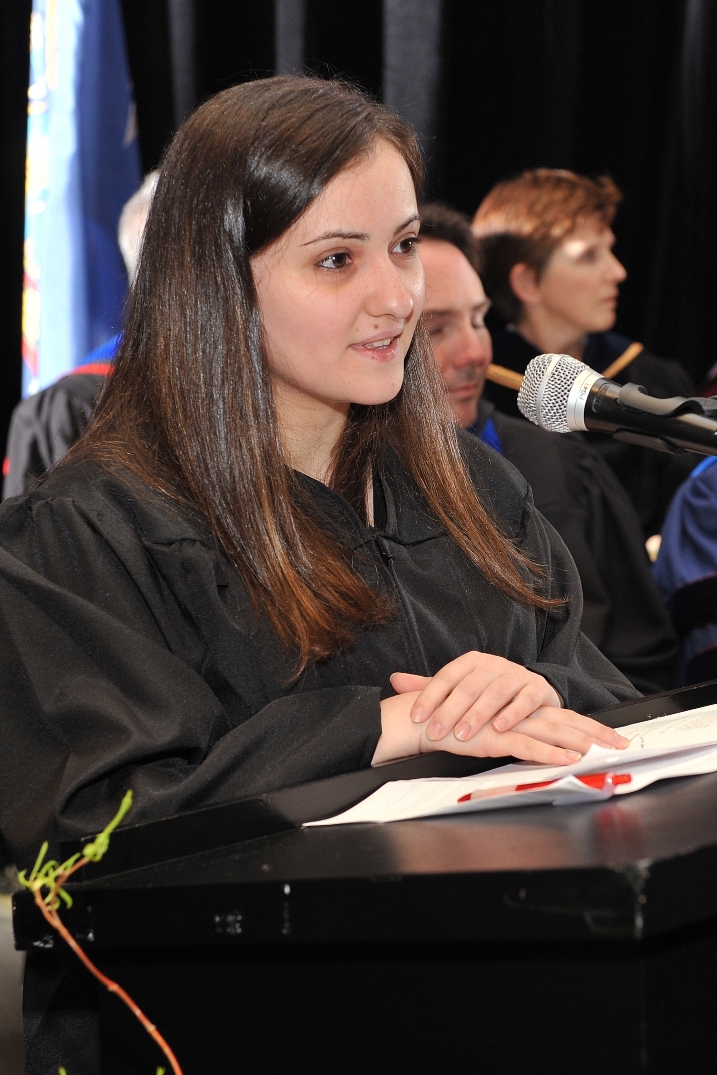 Another special presentation was made during the ceremony as the latest National Grid Internship and Scholarship recipients were announced. Michael Courtien '79, the National Grid Vice President for Customer Meter Services, presented the awards to Anthony Englese, Daniel McLoughlin and Ivon Vazquez. They become the latest of the more than 100 St. Francis alumni who have gone on to work at all levels of the corporation both in the United States and the United Kingdom. Courtien first began working when the company was called Brooklyn Union Gas, later becoming KeySpan and now National Grid. He said it took 33 years for him to get the chance, but could not pass up praising then Admissions Director Brother George Larkin, O.S.F. for working with him all those years ago to make sure he transferred into St. Francis College and was put on the path to success. Courtien also talked a little about the changeover to National Grid. He said that after a top-down review, National Grid executives thought the KeySpan internship program was a crown jewel of the company and they wanted to keep it. Going a step further, he said the St. Francis College students were the diamonds of that crown.

Helping to mark the occasion The Most Reverend Joseph M. Sullivan, the Retired Auxiliary Bishop of the Brooklyn diocese delivered the Keynote Address. He spoke of the differences between ideology, which he says means a very narrow way of looking at things, and idealism, which allows for productive discussions between people.

After the Keynote, St. Francis College Chancellor Frank J. Macchiarola '62 spoke fondly of his old friend the Bishop, pointing out the times they have served together on committees and highlighting Bishop Sullivan's expertise and influence in both religious and secular matters. He then presented Bishop Sullivan with the St. Clare Service Award.

The widow of Kevin C. Fogarty, Sr., a former Chairman of the St. Francis College Board of Trustees accepted the St. Clare Service Award on her husband's behalf from Board of Trustees Chairman Emeritus Thomas J. Volpe. Mr. Fogarty was Chairman of St. Francis College for 27 years, the second longest tenure in school history and is responsible for putting the College in the position it's in today. Tens of thousands of students owe thanks to his work. Mr. Fogarty passed away in June 2008.

Below are the recipients of the awards from the 2009 Charter Day celebration, including staff and faculty who were honored for their years of service to the St. Francis College.

Duns Scotus Inductees
Founded in 1935, the Duns Scotus Society is named for the Blessed Duns Scotus, a Franciscan scholar and champion of Our Lady's Immaculate Conception. Election to membership in the Society is based on scholastic standing, participation in extracurricular activities, evidence of loyalty to the ideals of St. Francis College and demonstration of a true Franciscan spirit.

Dean's Award
The Dean's Award recognizes and rewards students who have completed 28 or more credits at St. Francis College with a minimum grade point average of 3.6. The purpose is to reward academic excellence and help defray the cost of tuition not covered by other financial programs.

President's Award
The President's Award was instituted in 1972 to honor non-instructional personnel and the significant contribution they make to St. Francis College. The award recognizes administration and staff who have 15 years and 25 years of meritorious service.

The Pax et Bonum Medal
Instituted by the Board of Trustees and named from one of the earliest greetings of St. Francis of Assisi, this medal recognizes and honors those members of the faculty who have completed 15 years or more of dedicated, loyal preeminent service at St. Francis College. "Peace and Goodness" is a simple yet meaningful expression of the objective of Franciscan educators.