The maintenance is scheduled to take place on the following days: June 21, June 22, July 11, July 13, August 1, August 3, August 16, and August 17. If you experience any problems accessing any of these applications during these dates, please understand the application may be down for migration. SFC IT will be sending out notifications when systems are back online. Thank you for your support and patience during this process.
Student Life
June 27, 2018

Another Fulbright Scholar for St. Francis

For the fourth time, the prestigious Fulbright Program recognizes St. Francis College with a scholarship, honoring Tyler McKinney '17 with a Fulbright English Teaching Assistant award to work in the Netherlands. 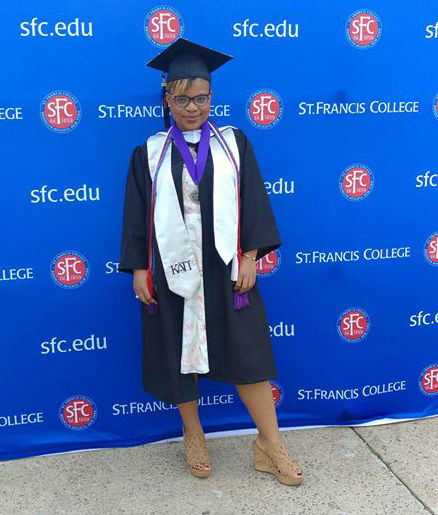 "There's a saying that goes, 'If your dreams don't scare you, then they're not big enough!' That's exactly what it was like applying for this Fulbright," said McKinney who completed a double major in Communication Arts and Adolescent Education, both with a concentration in English. "I don't always know how far I can go or how great I can truly be, but my heart is full because I am blessed with the opportunity to take my passion for education, language and travel and turn my dream into a reality."

McKinney will begin working in August at a vocational school with a focus on hospitality. She will also have the opportunity to train teachers how to implement educational theories and pedagogy in their classrooms and curriculum.

McKinney is the second student and fourth person at St. Francis to be recognized by the Fulbright Program.

Alissar Maaliki '04, a pre-med Biology Major won a U.S. Student Fulbright award to work with a research scientist in Morocco. She helped create a database of medicinal plants and their properties and visited village traditional herbalists.

Professor Virginia Franklin (English) won a U.S. Fulbright Senior Scholar award to teach and conduct research at the University of Waikato in Hamilton, New Zealand. Among other things, this led to a study abroad agreement that allowed Kelly Michalak '18 (Biology, minor in Psychology) and Aisha Yazdani (Biology) to study at Waikato.

"The Fulbright Program's mission is needed now more than ever: to promote mutual understanding between people from the United States and other countries, and thus create positive global social ripple effects," said Professor Franklin.

The fourth scholar was South African Vaneshran Arumugam, who won a Fulbright Scholar-in-Residence award to teach in the College's English Department. His work also overlapped with other academic departments and programs, as well as outside institutions and community organizations. The drama club he developed for severely disabled students and led weekly at The Hungerford School on Staten Island is still going strong.

Three others have Fulbright connections from before they joined St. Francis College.

Before he became the 19th President of St. Francis College, Miguel Martinez-Saenz was part of the Fulbright-Nehru International Administrators Program, selected to spend two week abroad to learn about higher education in India.

Dennis Anderson (Chair, Department of Management and Information Technology) was a Fulbright Senior Specialist and Visiting Professor in Belgium at the University of Mons-Hainaut.

Miriam Salholz (Accounting and Business Law) had two Fulbright grants; to teach U.S. law at the Universite de Paris while conducting research at Institut de Droit Comparé and an Intercountry Lecturing Award to teach in Greece for the National and Kapodistrian University of Athens, School of Law.