Skip to main content
Upload Proof of Vaccination
Reminder: All students, faculty, and staff must be fully vaccinated against COVID-19 and upload proof as a condition of accessing College buildings (including the residence hall) during the 2021-2022 academic year.
November 24, 2015

St. Francis College welcomed Dr. Yohuru Williams (Dean of the College of Arts and Sciences and Professor of History at Fairfield University) on November 24, 2015 as part of the Fall 2015 Senior Citizen Lecture Series: Urban Policing and Racial Conflict: Current Crises and Historical Context for the talk - In Defense of Self Defense: The Black Panther Party in History and Memory.

Dr. Yohuru Williams is the Dean of the College of Arts and Sciences and Professor of History at Fairfield University. He is the author of Black Politics/White Power: Civil Rights Black Power and Black Panthers in New Haven (Blackwell, 2006) and Teaching U.S. History Beyond the Textbook (Corwin, 2008). He is the editor of A Constant Struggle: African-American History from 1865 to the Present, Documents and Essays(Kendall Hunt, 2002), and the co-editor of In Search of the Black Panther Party: New Perspectives on a Revolutionary Movement (Duke University, 2006), and Liberated Territory: Toward a Local History of the Black Panther Party (Duke University, 2009). He also served as general editor for the Association for the Study of African American Life and History's 2002 and 2003 Black History Month publications, The Color Line Revisited (Tapestry Press, 2002) and The Souls of Black Folks: Centennial Reflections (Africa World Press, 2003). Dr. Williams also served as an adviser on the popular civil rights reader Putting the Movement Back into Teaching Civil Rights. Dr. Williams' scholarly articles have appeared in The Black Scholar, The Journal of Black Studies, The Organization of American Historians Magazine of History, Delaware History, Pennsylvania History, and the Black History Bulletin. 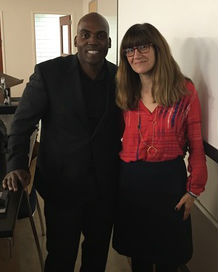 The event was sponsored by the Senior Citizen Lecture Series, the Center for Crime & Popular Culture, the Institute for Peace & Justice and co-coordinated by Professors Nickie Phillips & Emily Horowitz.