The maintenance is scheduled to take place on the following days: June 21, June 22, July 11, July 13, August 1, August 3, August 16, and August 17. If you experience any problems accessing any of these applications during these dates, please understand the application may be down for migration. SFC IT will be sending out notifications when systems are back online. Thank you for your support and patience during this process.
Academics
April 2, 2008

Outgoing President Frank J. Macchiarola '62 is stepping down after 12 years leading his alma mater. "I can honestly say that for every moment of my twelve years here, I have loved being president of this college," said President Macchiarola who graduated from St. Francis in 1962. 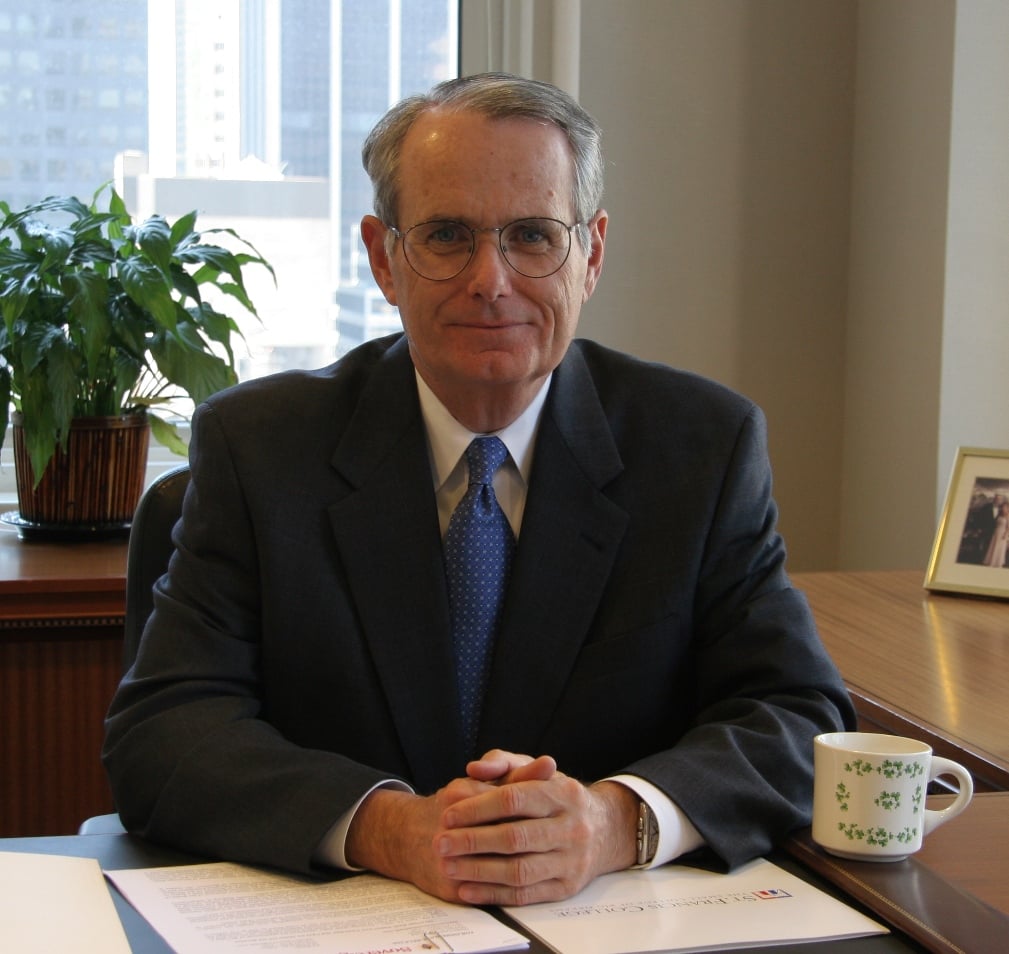 "There's no one better qualified to fill the shoes of President Macchiarola," said Brother Leonard Conway, O.S.F. '71, vice chairman of the St. Francis College Board of Trustees. "He's an alumnus of the school and has been a very active member of the St. Francis Board for 12 years. Our alumni, faculty, staff and most importantly our students will see an almost seamless transition when Mr. Dugan officially comes on board."

Mr. Dugan began his career in banking shortly after he graduated from St. Francis in 1968. Over the years, he has held many executive positions at local banking institutions with his breakthrough position being named President & CEO at NatWest USA in 1989. Mr. Dugan later became President of European American Bank and President of the Business Banking Division of Independence Community Bank before being promoted to his current position at Sovereign Bancorp, a $90 billion financial services company which has more than 800 branches in New England, Metro NY/NJ and the Mid Atlantic region. 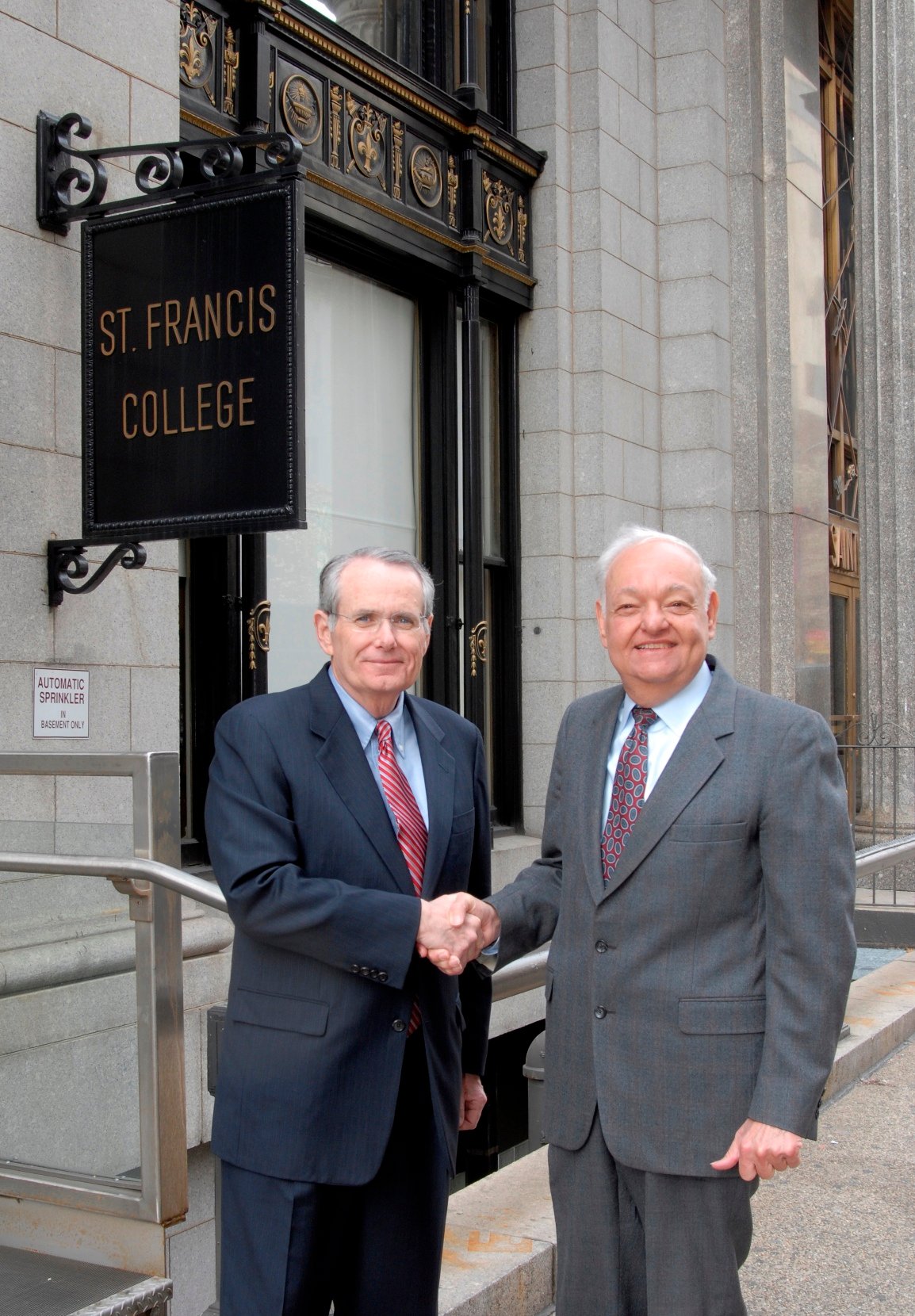 Born and raised in Brooklyn and still residing in Carroll Gardens, Mr. Dugan has always channeled his energy towards community service. He has helped raise millions of dollars for numerous local organizations like the Brooklyn Children's Library, the Anti Defamation League of B'Nai Brith and The Boy Scouts of America. He was also a long time member of the board at Good Shepherd Services, involved in many fundraisers including the committee responsible for building the Good Shepherd Services Center which houses South Brooklyn Community High School; a school focused on educating former High School Dropouts.

Mr. Dugan's philanthropic activities are woven into the fabric of Brooklyn and beyond. He sits on the boards of organizations as varied as the Brooklyn Academy of Music (BAM), the Partnership for New York City, the Regional Plan Association and the Futures in Education Foundation. Mr. Dugan also serves on the Finance Council of the Roman Catholic Diocese of Brooklyn.

For St. Francis College, Mr. Dugan was instrumental in completing the $40 million Campaign for Big Dreams, serving as the committee chairman. The campaign resulted in the building of the Anthony J. Genovesi Athletic Center and the new eco-friendly Academic Center which houses a state-of-the-art library and stadium-seat theater. Other products of the campaign are smart classrooms with multimedia displays, an HDTV production studio, new psychology lab, Wi-Fi internet access across campus and a host of other technology improvements all focused on giving students a competitive edge when they graduate.

"President Macchiarola has guided St. Francis through an amazing 12 years," said Mr. Dugan. "It's an honor for me to follow in his footsteps and to build on his work. We're celebrating our 150th year right now and getting ready to put in motion some major new projects like the start of another major fundraising campaign. Most importantly, we will continue to follow the core mission of this college, to offer working class families a College that provides a great education at a great price and one that makes sure its' graduates are not just prepared to enter the job market but will be productive in all aspects of their lives."

Academically, this spring, the first graduate students from the College will receive their Master's Degrees in Accounting as part of the 5-year combined Bachelor's / Master's Program. Every Accounting student who wanted a job out of college has already been offered and accepted a position, with most getting ready to work at one of the Big 4 accounting firms. Other new programs like Sports Management are gaining in popularity while Health Professions majors continue to get a boost from partnerships with local hospitals and institutions.

Another major source of pride is how the College continues to excel academically, while embracing diversity and breaking down the achievement gap between minorities and white students. St. Francis College was named among the top comprehensive colleges in the north for three years in a row by U.S.News & World Report. In 2008, the College was also named the 6th most diverse liberal arts college in the country by U.S.News. At the same time, African-American and Hispanic students graduate at nearly the same rate as white students and comparably better than their counterparts at similar institutions.*

Making St. Francis College and its academic programs accessible to as many people as possible has been one of Dr. Macchiarola's top priorities for his twelve years at the helm. Through the generous donations of alumni and friends, he was able to add more than 150 endowed scholarships, about one a month for his entire term. "I was the first in my family to go to college, and the only reason I could was because St. Francis offered affordable tuition and generous financial aid that was targeted to people like me," said President Macchiarola. "These scholarships give an opportunity to students who otherwise would never be able to attend a private college."

The College will be honoring President Macchiarola for all he has done for St. Francis and to recognize his life's work serving the people of New York City at the 47th Annual Charter Award Dinner, April 8.

The twelve years at St. Francis is the longest tenure in President Macchiarola's storied career. He spent five years as New York City Public Schools Chancellor under Mayor Ed Koch, five years as Dean of Yeshiva University/Benjamin N. Cardozo School of Law and enjoyed stretches at a variety of organizations including as President and CEO of the New York City Partnership, Inc., Deputy Director of the New York State Emergency Financial Control Board for New York City during the fiscal crisis of the mid 70's and Chair of the Advisory Committee of the Columbia Business School Community Collaboration.

Among his other career highlights, Dr. Macchiarola was appointed by Mayor Michael Bloomberg to serve as chair of the New York City Charter Revision Commission, mediated the 2003 strike of the Musicians Union Local 802 against the League of American Theaters and Producers, chaired the New York City Districting Commission, which drew City Council District lines for the 1991 election and acted as special referee in the case that drew New York State congressional lines for the 1992 election.

During his various positions, President Macchiarola has had the pleasure of working with noted New York leaders such as Governor Hugh Carey, David Rockefeller, Mayor Ed Koch and State Assembly Leader Stanley Fink.

Plans are still in the works for Mr. Dugan's Inauguration.