The maintenance is scheduled to take place on the following days: June 21, June 22, July 11, July 13, August 1, August 3, August 16, and August 17. If you experience any problems accessing any of these applications during these dates, please understand the application may be down for migration. SFC IT will be sending out notifications when systems are back online. Thank you for your support and patience during this process.
Student Life
May 9, 2018

Brooklyn's Best to Graduate on the Boardwalk

Finding herself the only Smithsonian intern from a small college, Valerie Kaufmann '18, St. Francis College's Spring Valedictorian became ambassador for a small college where individual attention from engaged faculty and administrations opened up her world to possibilities on par with any large institution.

"St. Francis is about community, and I am thrilled to see the myriad ways in which St. Francis supports its community–be it by supporting students with generous scholarships and one-on-one attention, or by helping members of the Brooklyn community with initiatives like public lectures, or community service events," said Kaufmann, a Communication Arts major with a double minor in Fine Arts and French. "This school has helped me in so many ways, but more important is the way that the programs it provides will continue to serve those that come after me."

Leading by example, Kaufmann will share the rest of her successes and her hopes to make the world a better place when she delivers her Valedictory Address on Thursday, May 17 at the Ford Amphitheater on the Coney Island Boardwalk at 12:00pm.

In addition to her internship at the Smithsonian Institution, Valerie also interned for Homes for Homeless, Institute for Children, Poverty & Homelessness, New York State United Teachers, and in the Office of United States Senator Kirsten Gillibrand. She also volunteers at multiple organizations around the city. On campus Valerie was Staff Editor of the student newspaper SFC Today, a delegate in the Model United Nations and part of the Student Ambassador Program. Vice-President of the Duns Scotus Honor Society she also won academic awards for Communication Arts and International Cultural Studies.

The Commencement Address will be delivered by Emmy award-winner David Ushery, NBC 4 New York's 11:00am and 5:00pm weekday newscasts. Ushery is a long-time supporter of the College, helping to raise money for scholarships at St. Francis' premier fundraising event, the annual Charter Award Dinner. 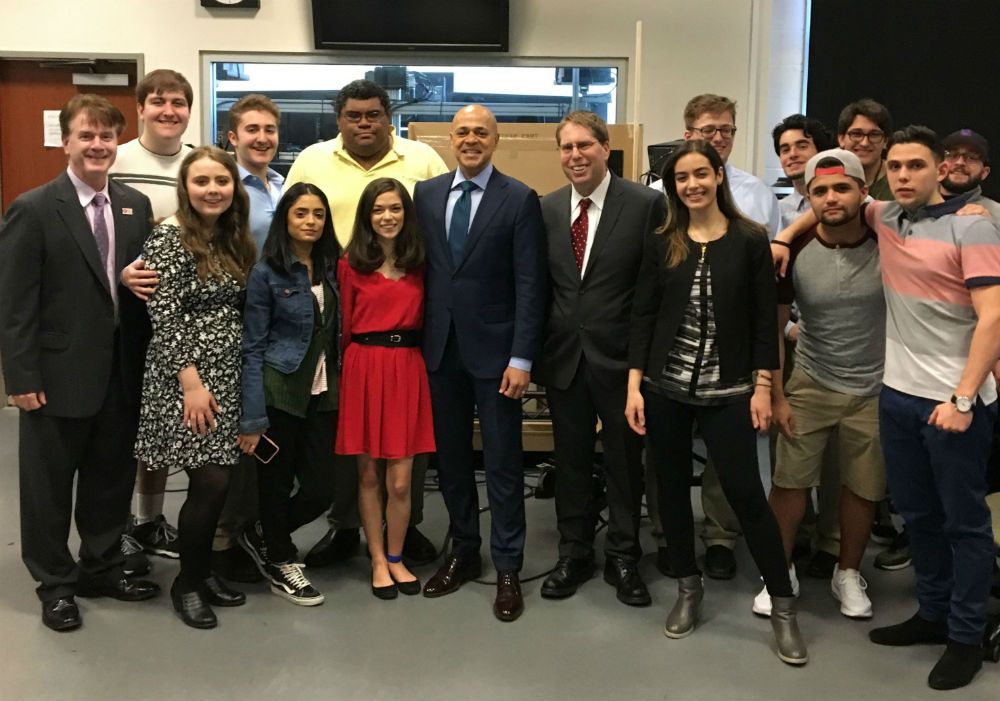 Gwendolyn Bianca Etienne '18 will offer one of the high notes of commencement as she sings the Star Spangled Banner, while two other students with perfect 4.0 GPAs will deliver a welcome address; Alexis Vazquez '18 and Annais Commiskey '18.

Gwendolyn is a proud Haitian-American, Psychology major and Pre-Med student. She was President of the Psi Chi Psychology Honor Society, co-President of the Psychology Club, and Treasurer of the Alpha Lambda Delta Honor Society. In addition, Gwendolyn was a member of the Caribbean Student Association, and the Environmental, Fencing, and Pre-Med clubs. She recently sang at the College's Charter Award Dinner. Outside of St. Francis Gwendolyn volunteers at a soup kitchen and teaches at her church. She plans to become a Pediatrician/Neonatologist and in the meantime will be working on her degree as an ABA therapist to help autistic children develop their behavioral and social skills.

Alexis is a Psychology major who received the Dr. Louis H. Primavera Medal for Excellence in Psychology. She is a member of the Psi Chi International Honor Society in Psychology and is now applying to post-baccalaureate programs to complete her pre-requisites for medical school.

Annais is a Math major with an Economics minor and holds the school record in Women's Track & Field for the 5k indoor and 10k outdoor events. She was also a finalist for NEC Scholar Athlete of the Year. Annais received the Award for Excellence in Mathematics and will attend graduate school at Rider University to earn a Master's Degree in teaching, with a focus on secondary mathematics.

A day before commencement, on Wednesday May 16 at 6:00pm, the College will host a Baccalaureate Mass at St. James Cathedral Basilica (250 Cathedral Place, Brooklyn, NY). The Celebrant for mass will be The Most Reverend James Massa, Auxiliary Bishop of the Diocese of Brooklyn.

Tuesday night, MCU Park, home of the Brooklyn Cyclones becomes home to the St. Francis College Terriers as graduates and their friends will take the field for a night of fun and games, capped off with Fireworks over Coney Island.

A full replay of Spring Commencement will be available on the St. Francis website (http://www.sfc.edu).

Among the other students graduating are:

Melissa Jagharry '18 graduates with Bachelor's and Master's Degree in Accounting. She is a member of the Accounting Honors Society, is on the Deans Lists, and received the Academic Excellence Award in Accounting – BS/MS Degree. Melissa says that weekly meetings of the Accounting Society were high points where her fellow students could give and receive support as they faced a challenging and rigorous curriculum. She credits Accounting Professor Louis D'Elia with having the biggest influence on her while at St. Francis. "There were many challenges, doubts, and failures; but twice as many rewards, successful moments, and happiness over these five years. Now my greatest accomplishment thus far is to hold my degree and be thankful for every one of those highs and lows." After graduation, Melissa will next take her CPA exam and begin working at mid-sized firm Mazars USA LLP. 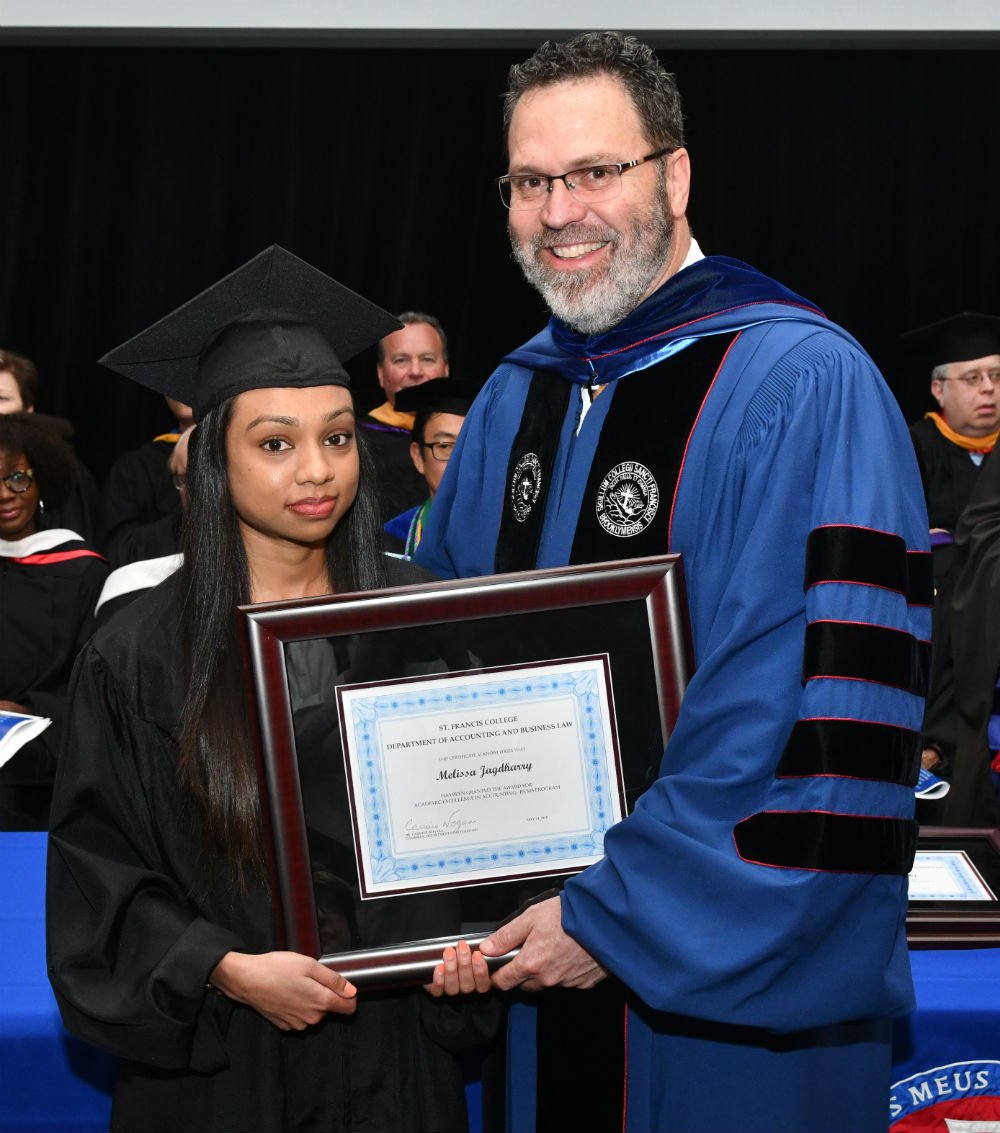 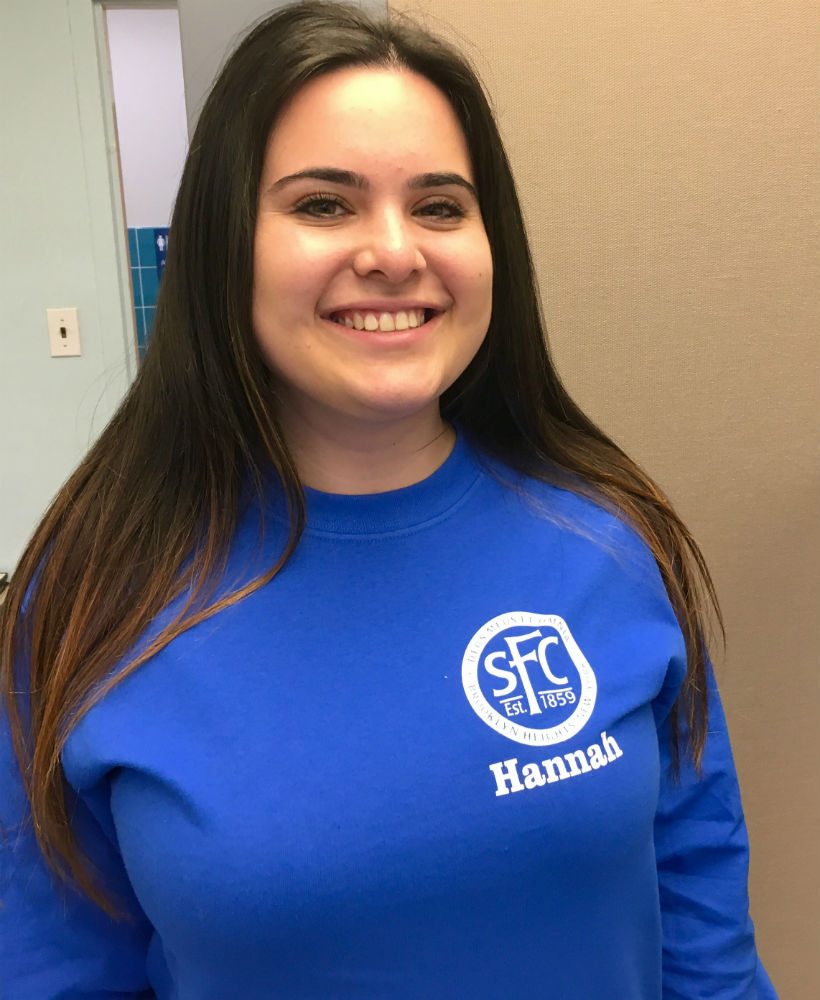 Hannah Berger '18 is a Nursing major who had one externship at NYU-Langone Health in cardiothoracic surgery and another at Staten Island Hospital. As President of the Nursing Club, she led community service events like raising money for the March of Dimes at the March for Babies and preparing food to serve at St. Joseph's Soup Kitchen in Greenwich Village. She received the Nursing Leadership Award and is a member of the Beta Beta Beta National Biological Honor Society. She thanks all her Nursing professors and support staff for leading her to success at St. Francis. Hannah will be taking the NCLEX exam this summer to become a registered nurse.

Johnny Perez '18 is the Director of U.S. Prisons Program for the National Religious Campaign Against Torture, a membership organization committed to ending U.S. sponsored torture, and cruel, inhumane, and degrading treatment, including solitary confinement. A Criminal Justice major, Johnny served as a Safe Reentry Advocate for the Urban Justice Center's Mental Health Project. He has worked tirelessly to change the status quo of unjust policies and practices as a member of pro-social groups the Campaign for Alternatives to Isolated Confinement (CAIC), and the New York Advisory Committee to the U.S. Commission on Civil Rights. He is also a member of the NYC Bar Association's Correction and Reentry Committee and is currently on the Board of Directors of the Juvenile Law Center. Johnny has testified at the United Nations and been interviewed by numerous news organizations around the world. Recently featured in an ad campaign that ran in the New York subway system, Johnny commented, "I remember when I was younger, I was homeless after running away from home and slept on the A train for two weeks. Today I'm still on the train, but in a different way and for a reason I never could have imagined." (Learn more about Johnny at justiceismypassion.com)

Monica Murray '18 graduates from the five-year combined Bachelor's and Master's degree program in Psychology. She transferred to St. Francis College to take advantage of small classes and devoted faculty. "I attribute much of my success to the psych department. I think I really benefited from the small class size and the motivation faculty helped to instill in me," said Murray, who will be attending Hofstra University working towards a PsyD in School-Community Psychology. She will also be working for the autism clinic based at Hofstra. Monica won the Uwe P. Gielen, Ph.D. Award for Excellence in Psychology and was part of a group of students who took first place for best poster at the 25th Annual Pace University Psychology Conference.

Marcus Da Silva '18 - Marcus came to St. Francis College from Brazil to study Economics with a concentration in Finance. He used his skills as a swimmer to earn a scholarship that afforded him the opportunity. He served as Captain of the Men's Swimming & Diving team and holds several College records at various distances. Marcus interned last summer at JP Morgan Chase and will begin working there full time upon graduation. 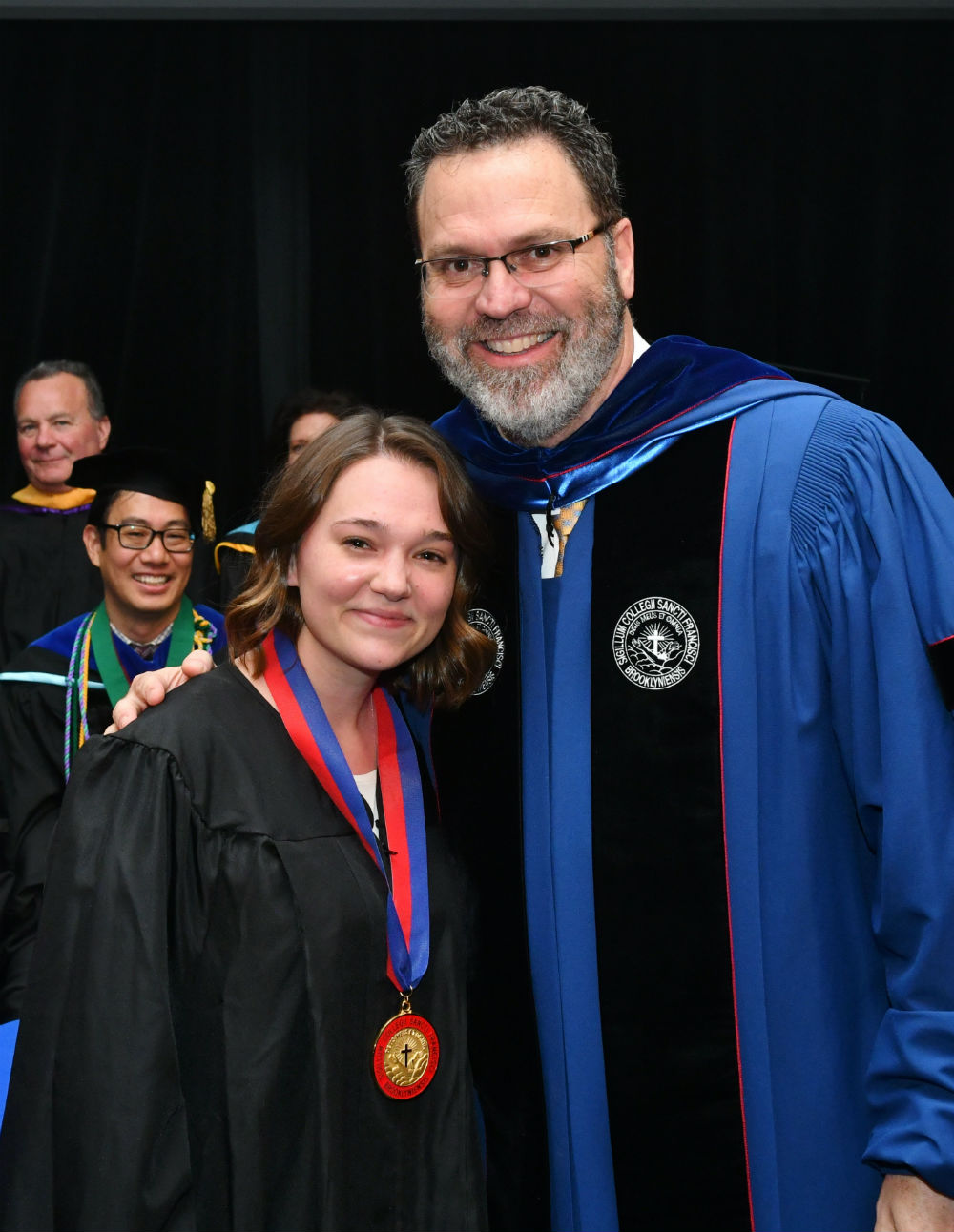 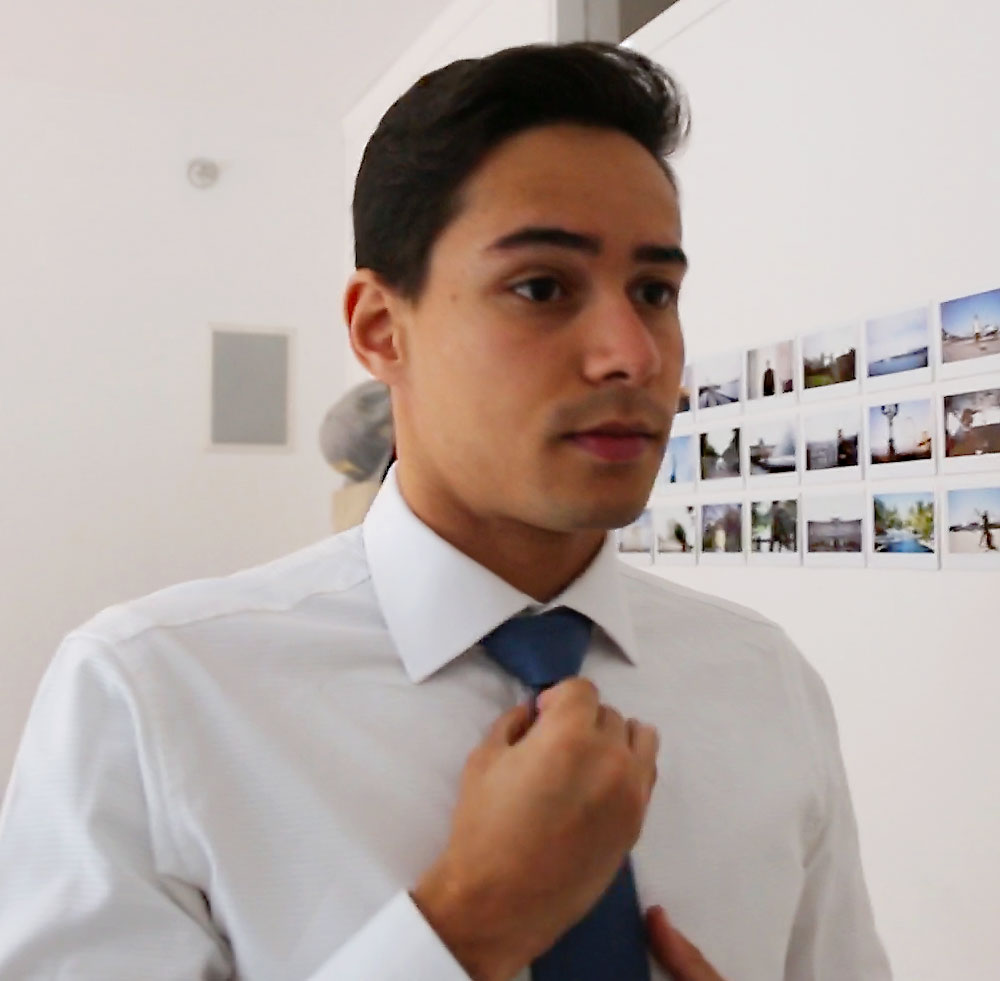 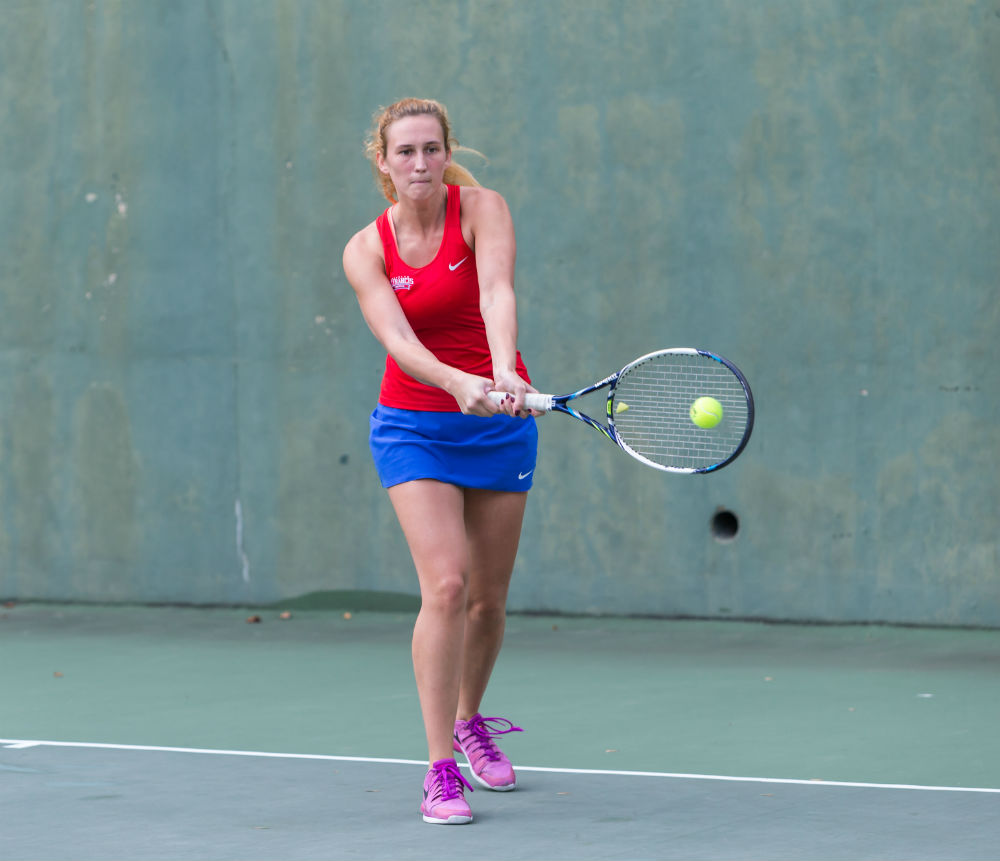 Laura Dimante '18 is a Political Science major with a minor in history. An international student from Latvia she transferred to St. Francis to play Tennis for an NCAA Division I team and take advantage of the opportunities New York City offers. She played first singles for the team this year, helping them to one of their best records in College history. Laura made the Deans List and was part of the Model UN Club. She will next go to graduate school to study International Relations: International Security at the University of Groningen in Netherlands.

Emmy award-winner David Ushery is the co-anchor for NBC 4 New York's 11:00am and 5:00pm weekday newscasts. An integral member of the NBC 4 New York news team, Ushery has covered many of the largest and most visible breaking news stories across the Tri-State region - and around the world including Hurricane Sandy, the Newtown Connecticut elementary school shootings; the emergency landing of US Air Flight 1549 in the Hudson River and the 2008 and 2012 presidential elections.

Ushery co-anchored the weekend editions of "News 4 New York" at 6 p.m. and 11 p.m. and was host of the Emmy-nominated "The Debrief with David Ushery."

Ushery joined NBC 4 New York from WABC-TV, where, during his 10-year tenure, he rose from general assignment reporter to full-time anchor of the early morning and noon broadcasts and was the primary fill-in anchor for the evening newscasts. Well respected for his work as a reporter, Ushery provided extensive, in-depth reporting of the shooting death of Amadou Diallo and the Sept. 11 terrorist attacks.

Known for his passion for volunteerism and tireless service to the local community, Ushery is a much sought after emcee and keynote speaker for area schools and nonprofit events. He has been repeatedly recognized for his commitment to NBC 4 New York's viewing audience and has been honored with multiple awards.

The Network Journal and Black Professionals Business Magazine named Ushery one of its "40 Under-Forty" for his journalistic accomplishments. The Israeli Consulate in New York City honored him for his comprehensive, fair and balanced reporting on issues that affect all New Yorkers.

Ushery, a Harry S Truman Scholar, is a graduate of the University of Connecticut. In June, 2014 Ushery received an Honorary Doctorate Degree from St. John's University in New York. He is married and has a son.