The maintenance is scheduled to take place on the following days: June 21, June 22, July 11, July 13, August 1, August 3, August 16, and August 17. If you experience any problems accessing any of these applications during these dates, please understand the application may be down for migration. SFC IT will be sending out notifications when systems are back online. Thank you for your support and patience during this process.
April 5, 2018

Champions on the court and in the classroom, St. Francis College Women's Basketball Head Coach John Thurston is retiring after six years leading the Division I team to new heights. 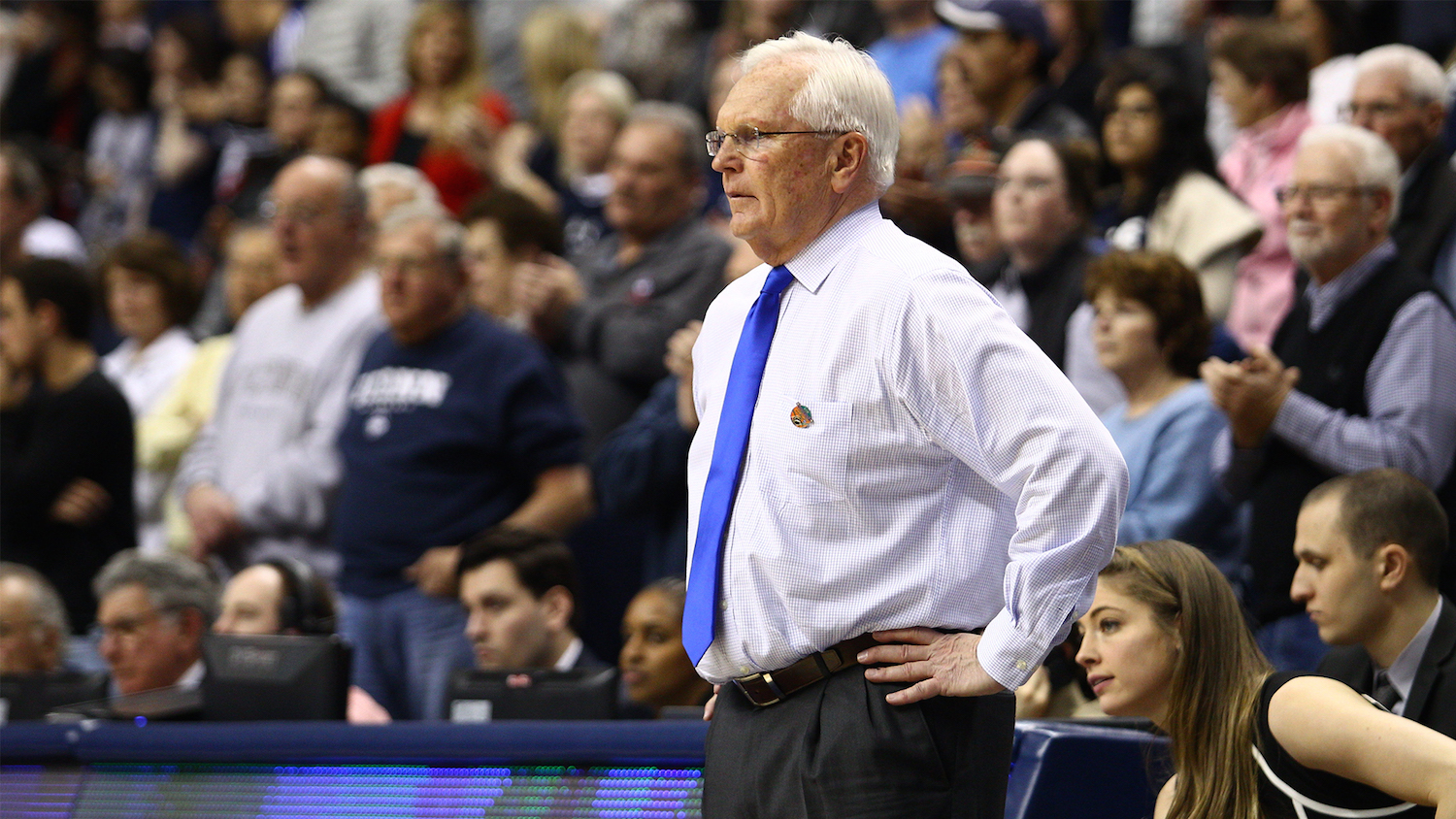 "Coach Thurston has been a tremendous leader for our Women's Basketball program," said Director of Athletics, Irma Garcia '80. "His student-athletes excelled both on and off the court and the graduates of this program have gone on to do amazing things in the world."

The 2014-15 women's squad won the Northeast Conference Championship, sending a St. Francis team to the NCAA Basketball Tournament for the first time. One year later, the Terriers finished with the highest GPA in the nation at 3.712.

"Even though I only had a few months to get to know Coach Thurston, I saw right away how much he cares about his players," said President Miguel Martinez-Saenz. "His focus on helping to graduate well-rounded young women really underscores the emphasis he placed on the student in student-athlete."

Under Thurston's leadership, the women's team set a college record for victories, developing several all-conference players including women who have gone on to play professionally in leagues around the world.

"I will be forever grateful to the young women who have come through our program these past six years," said Coach Thurston. "What they have accomplished both academically and athletically during this time has been remarkable."

"I would like to thank St Francis College Director of Athletics Irma Garcia and former College President Brendan Dugan for giving me the opportunity to share in the journey of these wonderful ladies who have been part of Terrier basketball. While our current players are making an impact here at school, our graduates are making their mark in their professional lives both regionally and around the world."

"As a coach you have the best seat in the house in watching student athletes use their collegiate basketball experience to help prepare themselves for the challenges that life after college presents. For me though, coaching through five different decades has offered an opportunity for personal growth and education while working with young men and women from different backgrounds and cultures as well as different parts of this country and the world. Wins and championships are nice but the learning and sharing of experiences were the real reward."

There's no other word that can possibly describe the coaching tenure of Terrier Women's Head Basketball Coach John Thurston at St. Francis College.

From the day the already-accomplished "Coach T" walked up those steps, through those glass Remsen Street doors, and into the lives of numerous Terrier student-athletes, he helped change the scope and focus of the St. Francis College Women's Basketball Program.

Coach Thurston took over the reins of the Program prior to the 2012-2013 season, after having served as an Assistant to former Head Coach Brenda Milano for several years. What he has accomplished over the course of his six years at the helm is truly impressive:

--- An appearance by St. Francis in the NCAA National Basketball Championship Tournament against the Number One team in the Nation;

--- A high-water mark for victories in a season by any Terrier Women's hoops squad – 19 wins;

--- The development of several All-Conference players, some of whom have gone onto professional basketball careers in Europe; and,

--- A Division I Collegiate Basketball Program that has become known throughout the United States and the World as having an unwavering focus on academic achievement.

If you asked Coach Thurston what has been the most satisfying accomplishment during his time in Brooklyn Heights, his response would likely not be hoops-oriented. It probably would be the National Championship in Grade Point Average awarded to the Terriers by the WBCA for the 2015-2016 season, the academic equivalent of the Women's Basketball National Championship. In fact, the emphasis that he helped instill in the Program has led them five straight years among the WBCA Academic Top 25 Team Honor Roll, a note-worthy achievement for one of the smallest Division I institutions among the giants of the NCAA world.

Thurston generally talks as much about the high academic achievement rate of his charges and their successes after graduation, as he does about basketball. There was one team member a couple of years ago who did not see tons of playing time and did not see a lot of numbers alongside her name on any game's stat sheet. But that bench player was regarded by the rest of her Terrier teammates as a leader because of their respect for her character, her focus and her academic accomplishments. That's indicative of the atmosphere of respect that Coach Thurston helped to create and nurture through every one of his teams.

And if you attempt to congratulate him for his team's outstanding academics, he'll deny he has anything to do with it. "It's all them," he'll tell you. "We really don't do that much," he said, trying to downplay the effect his coaching staff's level of encouragement has on the academic progress of the Program.

"While our current players are making an impact here at school, our graduates are making their mark in their professional lives, both regionally and around the world," said Thurston proudly.

St. Francis College President Miguel Martinez-Saenz also knows the strong impact that Coach Thurston has had on this team. "Even though I only had a few months to get to know Coach Thurston, I saw right away how much he cares about his players. I have nothing but respect for the way he carried himself and the example he set for this program; on the court and in the classroom. What's more, his focus on helping to graduate well-rounded young women really underscores the emphasis he placed on the student in student-athlete."

"Coach Thurston has been a tremendous leader for our Women's Basketball program," stated Director of Athletics, Irma Garcia '80.

"During his 6 years as the Head Coach of the Terriers, his student-athletes excelled both on and off of the court and the graduates of this program have gone on to do amazing things in the world. Not only did his 2014-15 squad bring us the Northeast Conference Championship, but also in 2015-16 the Terriers put the STUDENT in Student-Athlete and finished first in the Nation with a Team GPA of 3.712. His vision of the Terrier Way has been something that our entire Athletic Department here at St. Francis College has benefited from."

"I cannot thank John Thurston enough for his dedication, commitment and passion to this program, and am confident the impact he has had on Women's Basketball at St. Francis College has, and will, continue to strengthen the program for years to come."

"We are excited for this next stage of Terrier Women's Basketball and look forward to the continued momentum that Coach Thurston and his team has created for this program."

As "Coach T" walks out of those Remsen Street doors and into a well-deserved retirement, he leaves behind a solid foundation, a record of obvious athletic progress, and a legacy of undeniable academic success.

He has truly left an impact.