Skip to main content
Upload Proof of Vaccination
Reminder: All students, faculty, and staff must be fully vaccinated against COVID-19 and upload proof as a condition of accessing College buildings (including the residence hall) during the 2021-2022 academic year.
Academics
September 16, 2017

With the gift of $50,000 for winning the 2017 St. Francis College Literary Prize, Dana Spiotta (Innocents and Others - Scribner) now has one of the most important gifts of all, the gift of more time to work on new projects. (Watch Dana Spiotta Win the Award)

That encouragement and freedom to write is precisely why St. Francis College created the Literary Prize, which is awarded every two years to a mid-career author. The college wants to focus attention on writers as they continue to find their voice, while supporting them in producing their next great work.

Spiotta echoed that philosophy in her acceptance speech at the Brooklyn Book Festival Gala Saturday night, held at the College on September 16, 2017.

"Debuts tend to get the most attention, but to me, a writer's later books are always more interesting," said Spiotta. "The early influences fall away. The writer hits a stride in which possibilities expand, abilities peak, and energy has not yet diminished. Ideally, experience allows you to take bigger artistic risks and you become engaged in creating a whole body of work." 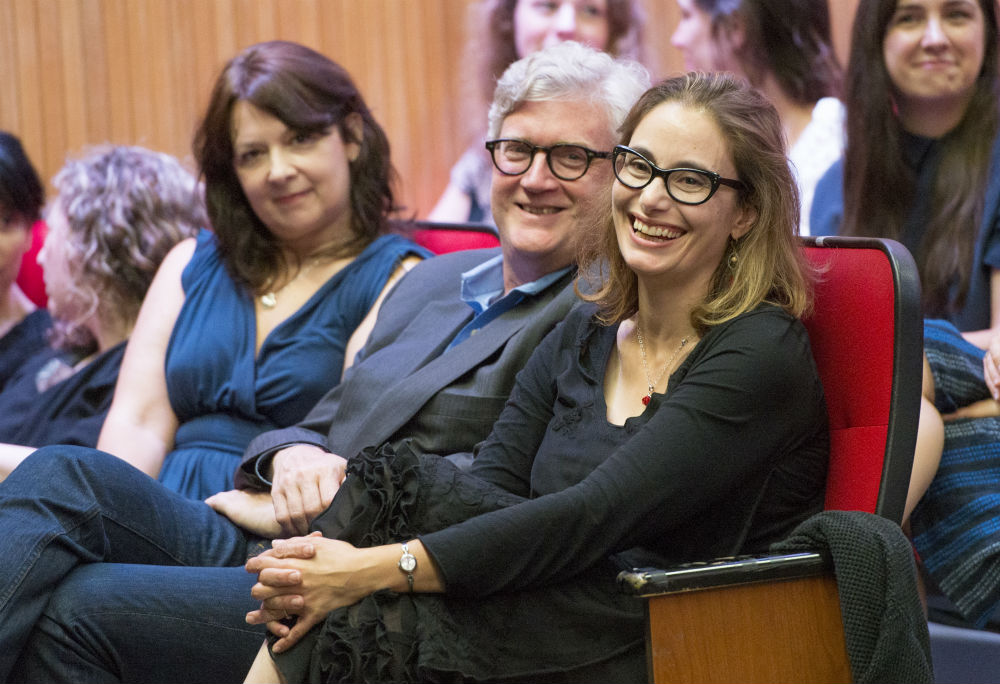 St. Francis College Provost and Chair of the 12th Annual Brooklyn Book Festival Timothy J. Houlihan announced the prize winner, reading a citation about Innocents and Others from the jury, which featured; Ellen Litman (The Last Chicken in America), Jeffery Renard Allen (Song of the Shank), and René Steinke (Friendswood).

"Dana Spiotta's masterful novel Innocents and Others tells a unique story of a friendship between two filmmakers through an ingenious arrangement of fragmented narratives and invented sources; biographical essays, video transcripts, diary entries, online chats. With luminous, compelling prose Spiotta has created a cast of characters whose flaws are as fascinating and poignant as their ambitions. Innocence and Others raises important questions about technology, film, friendship, and justice. It's ultimately a bold examination of the motivations and ethics behind the making of art."

Spiotta thanked the jury and St. Francis for fulfilling two important needs for a writer, "To continue working you need courage and you need support. Recognition by a panel of fellow writers is deeply encouraging and money is a gift of time to a writer. Less time making ends meet equals more time writing. There is never enough time."

Following up on the award Spiotta attended a panel Sunday at the Book Festival with Adam Haslett, Deb Olin Unferth, as well as the three jury prize members. They spoke about the successes and challenges of being a mid-career author as well as the importance of a prize that focuses attention on a point in a writer's life when attention starts to fade.

More than 185 authors submitted entries for the award, giving Jury Prize members; a herculean task in picking a winner.

Spiotta summed up one of the lasting effects of winning the award, "Prizes put a little pressure on you to do better and reach further, which is a good thing."

The $50,000 Literary Prize compliments the programming at St. Francis College which brings a number of high-profile and rising star authors to campus every year through the Walt Whitman Writers Series. The next scheduled author is Ron Currie, who will be at St. Francis on October 25 at 5:00pm.

2017 Dana Spiotta, Innocents and Others

2015 Maud Casey, The Man Who Walked Away

Dana Spiotta is the author of Innocents and Others; Stone Arabia, A National Books Critics Circle Award finalist; and Eat the Document, a finalist for the National Book Award and a recipient of the Rosenthal Foundation Award from the American Academy of Arts and Letters; and Lightning Field (2001). Spiotta was a Guggenheim Fellow, a New York Foundation for the Arts Fellow, and won the 2008-9 Rome Prize from the American Academy in Rome. She lives in Syracuse with her daughter Agnes and teaches in the Syracuse University MFA program.

About Innocents and Others - two women grow up in LA in the 80s and become filmmakers. Meadow and Carrie have everything in common—except their views on sex, power, movie-making, and morality. Their friendship is complicated, but their devotion to each other trumps their wildly different approaches to film and to life.

Ellen Litman is the author of two novels, Mannequin Girl and The Last Chicken in America, a finalist for the 2007 LA Times Art Seidenbaum Award for First Fiction and the 2008 New York Public Library Young Lions Award. Her work has appeared in Best New American Voices, Best of Tin House, and elsewhere. She currently teaches at the University of Connecticut, where she serves as associate director of the Creative Writing program. More at http://ellenlitman.com.

Jeffery Renard Allen is Professor of Creative Writing at the University of Virginia. He is the author of two collections of poetry, Stellar Places (Moyer Bell, 2007) and Harbors and Spirits (Moyer Bell, 1999), and three works of fiction, the widely celebrated novel, Rails Under My Back (Farrar, Straus, and Giroux, 2000), which won The Chicago Tribune's Heartland Prize for Fiction, Song of the Shank (Graywolf Press, 2014), and the story collection Holding Pattern (Graywolf Press, 2008), which won the Ernest J. Gaines Award for Literary Excellence. His other awards include a Whiting Writer's Award, a support grant from Creative Capital, The Chicago Public Library's Twenty-first Century Award, a Recognition for Pioneering Achievements in Fiction from the African American Literature and Culture Association, the 2003 Charles Angoff award for fiction from The Literary Review, and special citations from the Society for Midlands Authors and the Zora Neale Hurston/Richard Wright Foundation. He has been a fellow at The Dorothy L. and Lewis B. Cullman Center for Scholars and Writers at The New York Public Library, a resident at the Rockefeller Center in Bellagio, Italy, and is a John Simon Guggenheim Foundation. More at www.jefferyrenardallen.com.

René Steinke's most recent novel, Friendswood (Riverhead), was shortlisted for the St. Francis College Literary Prize and named one of National Public Radio's "Great Reads" of 2014. Her previous novel, Holy Skirts, an imaginative retelling of the life of the artist and provocateur, Baroness Elsa von Freytag-Loringhoven, was a Finalist for the National Book Award. Her first novel is The Fires. Steinke is the recipient of a 2016 Guggenheim Fellowship. She is the former Editor of The Literary Review, where she remains Editor-at-Large. She has taught at the New School and at Columbia University, and she is currently the Director of the Low-residency MFA program in Creative Writing at Fairleigh Dickinson University. She lives in Brooklyn. More at http://www.renesteinke.net.