The maintenance is scheduled to take place on the following days: June 21, June 22, July 11, July 13, August 1, August 3, August 16, and August 17. If you experience any problems accessing any of these applications during these dates, please understand the application may be down for migration. SFC IT will be sending out notifications when systems are back online. Thank you for your support and patience during this process.
Academics
September 23, 2013

David Vann's novel, Dirt, beat out more than 170 other books to capture the $50,000 St. Francis College Literary Prize, one of the richest prizes in the United State. Vann's selection was announced Saturday, September 21 at the opening night gala for the Brooklyn Book Festival which was held at St. Francis College.

Dirt follows struggling twenty-two-year-old Galen as he deals with his emotionally dependent mother, encroaching extended family and his own manic binges

The other four writers who made the short list for the award were: Carol Anshaw (Carry the One), Jami Attenberg (The Middlesteins), Tony D'Souza (Mule) and Christopher Tilghman (The Right-Hand Shore).

Anshaw and Attenberg joined Peter Cameron who served on the Jury at a panel at the Book Festival Sunday morning September 22.

The biannual St. Francis Literary Prize is dedicated to supporting mid-career authors. Books that qualify must be a third through fifth work of fiction. 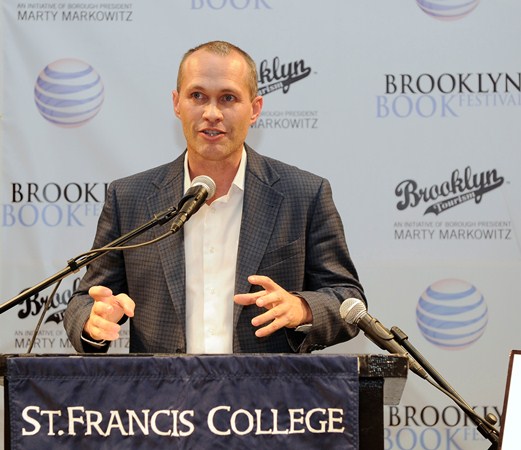 "It's a prize that has no parallel really among existing literary prizes and comes at a perfect time in a writer's career," said Jonathan Dee, a member of the jury and winner of the second Literary Prize for his novel, The Privileges. "There's a lot of attention when you make your debut. There's a lot of attention, if you're lucky when you die, but in between sometimes you're a little bit at sea."

The first Literary Prize was handed out in 2009 to Aleksandar Hemon for his collection of short stories, Love and Obstacles.

The award is part of the College's larger mission to support writers in Brooklyn and beyond. The College brings numerous authors to campus every year through events like the Walt Whitman Writers Series, including: E.L. Doctorow, Pete Hamill, Julie Orringer, Jonathan Lethem and Nikki Giovanni

About David Vann
David Vann was born in the Aleutian Islands and spent his childhood in Ketchikan, Alaska. Published in 19 languages, Vann's past works include; Legend of a Suicide, Caribou Island, the memoir, A Mile Down: The True Story of a Disastrous Career at Sea, and the non-fiction, Last Day On Earth: A Portrait of the NIU School Shooter. He has written for the Atlantic Monthly, Esquire, The Sunday Times, The Observer, The Guardian, The Sunday Telegraph, The Financial Times, and other magazines and newspapers. A former Guggenheim fellow, National Endowment for the Arts fellow, Wallace Stegner fellow, and John L'Heureux fellow, he is currently a Professor at the University of Warwick in England.

About the Jury
Jonathan Dee teaches in the graduate writing programs at Columbia University and the New School. He is also a staff writer for The New York Times Magazine, a frequent contributor to Harper's, and a former senior editor of The Paris Review.

Peter Cameron's books The Weekend, The City of Your Final Destination, and Someday This Pain Will Be Useful to You, have all been made into feature films with additional plans for Andorra. He has taught at Oberlin, Columbia, Yale and The New School.