The maintenance is scheduled to take place on the following days: June 21, June 22, July 11, July 13, August 1, August 3, August 16, and August 17. If you experience any problems accessing any of these applications during these dates, please understand the application may be down for migration. SFC IT will be sending out notifications when systems are back online. Thank you for your support and patience during this process.
Academics
January 18, 2018

From Albania to Brooklyn Heights Valedictorian

When Kejsi Shkreta '18 first came to New York from Albania, she left behind a country that was enjoying a new openness to the world and its first taste of democracy. Her parents worked hard to give her the opportunity to attend college in the United States and she took full advantage.

"I wanted to be near those skyscrapers, to be immersed in a cultural melting pot, but to also be part of something that respected tradition and carried an air of respect." 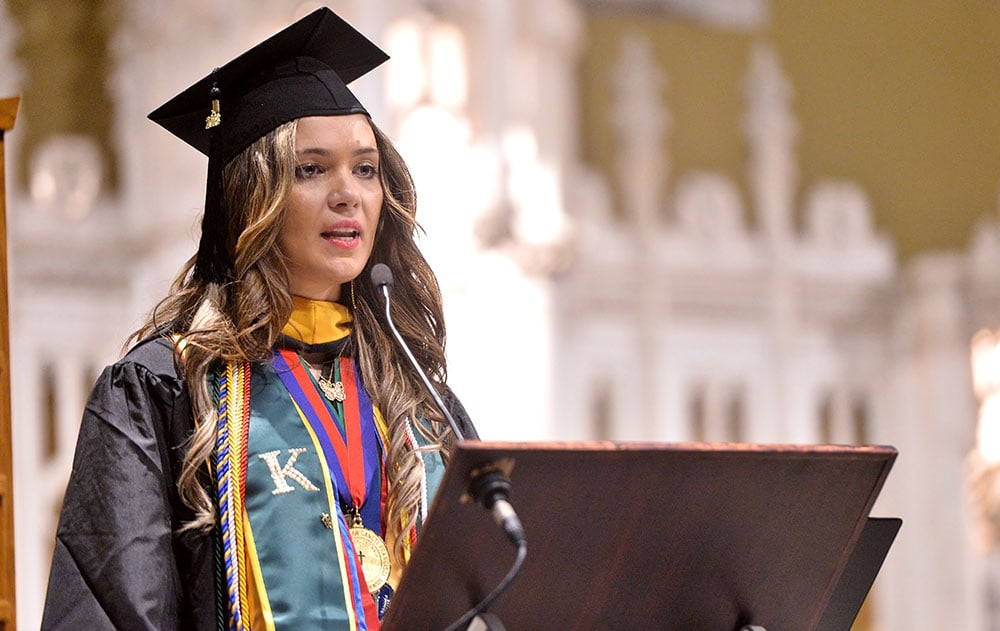 Her high grades and motivation earned her the Gene '79 and Ginna Donnelly Scholarship, allowing her to attend St. Francis College. She thrived; earning a perfect 4.0 GPA and interning at Bank of America and for the New York City Department of Education.

Now as Valedictorian for the Class of 2018 Winter Commencement, Kejsi (pronounced Kay'-cee) shared her story and words of encouragement with her fellow graduates on Tuesday at St. Charles Borromeo Church. "Try to not forget, we are the sum of all our experiences. Everything we do and choose not to do leads to what we will be tomorrow."

Presiding over his first commencement since beginning at St. Francis College in September, President Miguel Martinez-Saenz welcomed the students and asked them to reflect on their place in society and on their role in making the universe better than when they arrived. Reflecting upon the Parable of the Good Samaritan in a manner inspired by by Dr. Martin Luther King, Jr., President Martinez-Saenz asked students to think deeply and fundamentally about what it means to be in service to others. As he noted, to those who much has been given, much will be expected.

In his Commencement Address Professor Geoffrey Horlick, Director of the MS in Accounting Program urged all graduates to stay informed and to vote. "Change is often slow, but each generation moves it forward," he said, referring to the waves of civil rights movements he's experienced since coming to St. Francis College 38 years ago. He commented that when he started teaching his classes were made up of almost all men and very few minorities, far different from the amazing diversity he now sees in every class.

Under Dr. Horlicks's leadership, the College began a five-year combined Bachelor's and Master's Degree Program in 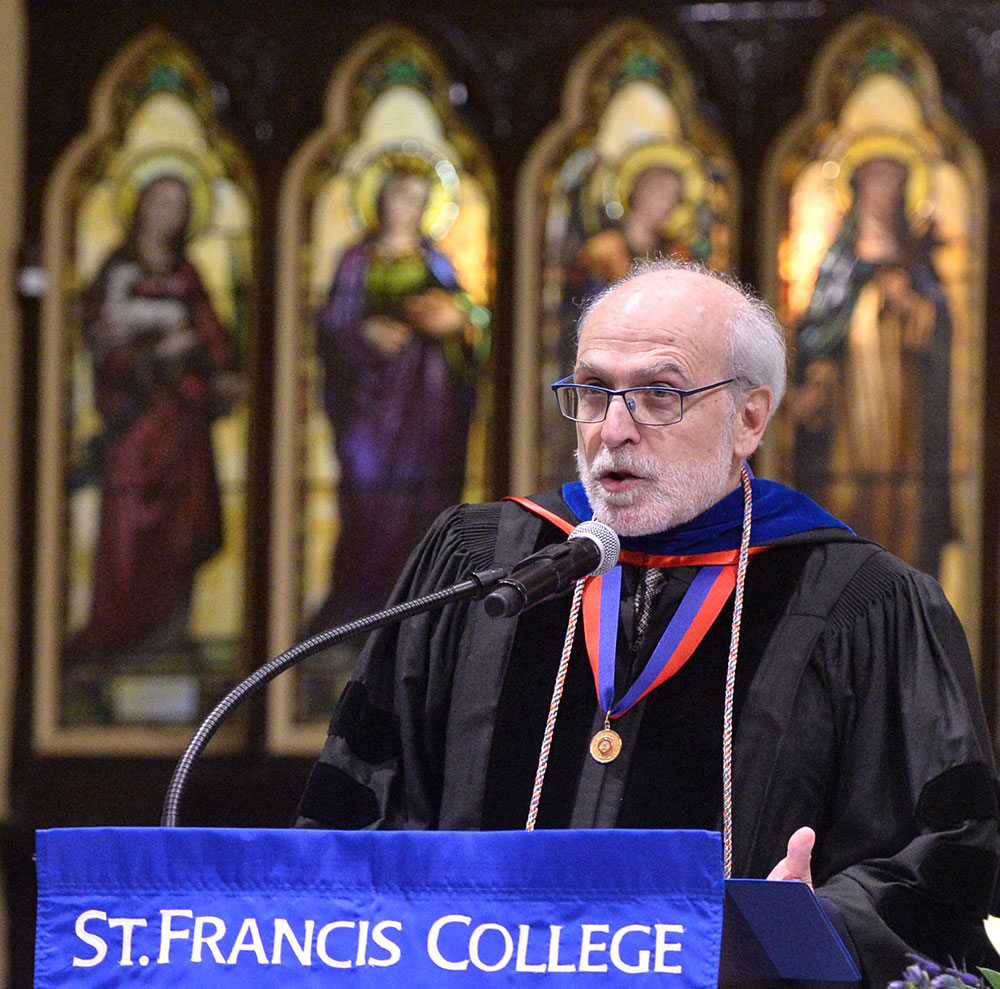 Accounting as well as a two year Master's Degree Program. As Chair of the Department of Accounting & Business Law and later as Program Director of the MS Program in Accounting, his rigorous standards and mentorship have instilled a high level of skill and proficiency that puts St. Francis College accountants on par with those from the best schools in the country.

Outside of the classroom, Dr. Horlick is a member of the American Accounting Association, American Institute of CPAs and New York State Society of CPAs. He has published in Business Horizons and The Federal Accountant and served as Author and Editor of the Kaplan CPA Review Course for ten years. In addition he has consulted for Citicorp, Coopers & Lybrand, Theatre Now, Ensemble Studio Theatre, Hughes/Moss Casting, and Sherwood Ltd. Dr. Horlick currently serves as a Board Member and Treasurer of the Adoptive Parents' Committee and has participated as a panelist at the organization's annual conference.

As valedictorian, Kejsi's credentials are numerous. She is a member of the Duns Scotus Honor Society, Sigma Beta Delta (International Honors Society for Business, Management and Administration), Alpha Lambda Delta (Freshman Honor Society), and the National Honor Society. A Management major with a minor in Marketing and concentration in Finance, she was President of the Information Technology Club, Treasurer of the Entrepreneur Club and a member of the Investment Club, International Students Committee, and the Troupers. She was also honored by her fellow students with the John F. Kennedy and Martin Luther King, Jr. Memorial Award and the Emerging Student Leader Award.

Serving as a Resident Advisor in the College's dorm helped her a great deal financially, and she supplemented that working as a Math Tutor in the Academic Enhancement Center, and as student worker in multiple departments.

In addition to her internships at Bank of America and the DOE, Kejsi also interned at Morningside Evaluations and volunteered for Wise & Co where she worked backstage at fashion shows and red carpet events, putting her elbow to elbow with several celebrities, including those she first watched as a little girl in Albania.

Kejsi says that she knows she wouldn't be here without the help of many people along the way. "Although my journey is far from over, I want to directly thank the SFC alumni for their generosity. Without their altruism, students like me would be greatly strained to fully realize their dreams." She also thanked Gene and Ginna Donnelly, who she called a second family.

After all the graduates received their diplomas, Patrick Dugan '01, President of the Alumni Board of Trustees and son of recently deceased former president, Brendan J. Dugan '68 welcomed the newest alumni and encouraged them to keep St. Francis close.

Among the students who graduated:

Marlina Reid '18 (Rego Park) is a second generation Terrier who majored in Health Care Management with a minor in Entrepreneurship. She is a member of Eta Sigma Gamma, the National Health Education Honor Society, was Vice President of the Entrepreneurship Club, and won the College's first HealthCare Hackathon, an entrepreneurial pitch contest, for her idea to create a health and wellness subscription box geared towards college students. A recipient of the Arthur Curry Scholarship, Marlina credits Health Care Management Professor Michele Montecalvo for inspiring her to major in Health Care Management and thanks Professor Montecalvo for her guidance and mentoring. Most recently they worked together on the Great American Smokeout. Marlina co-moderated the "Lung to Lung" panel on tobacco use in New York City. She was also the Student Advocate for Clear Passages, a group focused on eliminating tobacco use on campus. Her activity and research with Clear Passages helped secure a $12,000 grant for education and promotion of smoking cessation programs and included a trip to the American Cancer Society headquarters in Atlanta to learn more about the issue. "St Francis college has been a wonderful experience and I am glad I chose to be a Terrier. I learned that who I am is more than enough and the importance of following my Franciscan Heart." Ultimately, Marlina wants to teach Health Care Management at the college level, but first she wants to gain experience in her chosen field. "I found that my best professors were the ones who could share their professional experiences with us." Her mother Pauline (Patterson) Reid '72, an English major, handed Marlina her diploma.

Federico Curbelo '18 (Gravesend) carries a lot of Terrier pride, academically and athletically, as he makes his way to commencement. A Business Management major, Curbelo is now in the second phase of the Graduate Development Program at HSBC, training to become an investment banker. Federico is thankful to Professor Michael MacIntyre '97 (Head of Retail Business Banking at HSBC) for providing a strong foundation in the classroom and bringing him into the St. Francis alumni network. Born in Uruguay and living in New York since he was 7, Federico played soccer for Christ the King High School. As a member of the St. Francis Men's Soccer team, he helped the team win three NEC Championships in his four years at the College. Federico was captain the past two years, named 2nd team All-Conference, and made the Academic Honor Roll. "Coming from a low income household, the generous scholarship and ability to play soccer was an awesome opportunity. Athletics helped me grow." Federico added that people like his coach Tom Giovatto and Yuki Miyazawa (Strength and Conditioning) turned him from a boy into a man.

Enza Agliata '18 is an Accounting Major who went from the classroom right to a job at National Grid, becoming the latest in list of more than 100 graduates who have worked there. Enza actually graduated a half year early from the five-year Combined Bachelor's and Master's Degree program. She was a member of the Accounting Society, the Alpha Lambda Delta Honor Society, the Omicron Delta Epsilon International Economics Honor Society, and was Treasurer of the Italian American Historical Society for two years. A recipient of the Robert '50 and Mary Lanigan Scholarship, Enza worked most of her college career, first as a Junior Accountant at Glatt, Maney, Kling & Rufer, CPA's P.C. and then for two years in the tax department at National Grid. She now works there full time as an Analyst in the New York Modeling & Data Analytics department. "Dr. Behrouz Tabrizi (Professor of Economics) really motivated me at St. Francis. His dedication and teaching style gave me an opportunity to think outside the box. What I learned in his class has not only allowed me to develop in the classroom but also really shine in my time at National Grid."

Luis Velez '18 is a Communication Arts major with a concentration in Digital Media and a minor in Sports Management. His academic career took off when he and a classmate began working for the Terrier Sports Network, broadcasting home games for Men's and Women's Basketball, as well as Soccer, Volleyball and Water Polo. Working there, under the guidance of Dexter Henry, put him on an artistic path that now includes a love for photography, creative video editing, and documentary filmmaking. "Coming from a small high school to a small college helped me transition well. It allowed to learn more and talk in depth with professors." He says Communication Arts Professor Augusta Palmer was a big influence on his films and helped him better understand the process of filmmaking. While he wants to continue wearing the different hats in his creative portfolio Luis says he really loves telling stories and documentary filmmaking may be the road he most wants to travel down. You can watch his most recent work about The New Age of Photography.