The maintenance is scheduled to take place on the following days: June 21, June 22, July 11, July 13, August 1, August 3, August 16, and August 17. If you experience any problems accessing any of these applications during these dates, please understand the application may be down for migration. SFC IT will be sending out notifications when systems are back online. Thank you for your support and patience during this process.
Academics
April 27, 2016

Writers from The Daily Show, The Nightly Show & Late Night with David Letterman

In an election year, we're reminded how much we look to comedy and late-night television to provide perspective and give voice to frustrations and absurdities of the political process. Three of the people who put those jokes on TV came to St. Francis College on April 26, 2016 for Funny Business: Writing for Late Night.

Organized by the Center for Communication, Zhubin Parang (The Daily Show with Trevor Noah), Franchesca Ramsey (The Nightly Show with Larry Wilmore), and Joe Toplyn (Comedy Writer and Producer) discussed their impact on politics and the national conversation in this election year as well as their process of thoroughly researching and fact-checking each segment.

The panel was moderated by Jennifer Danielson, President of Above Average Productions.

The event is presented with the NYC Mayor's Office of Media and Entertainment and St. Francis College. 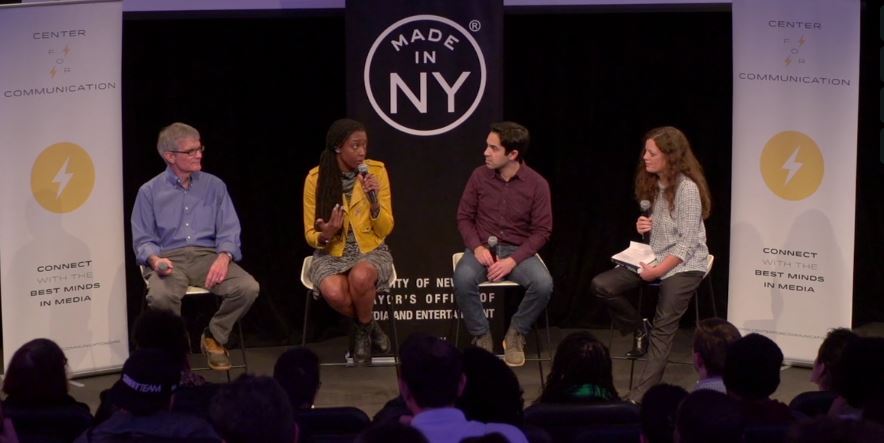 Franchesca Ramsey (@chescaleigh) is a Writer/Performer on Comedy Central's "The Nightly Show with Larry Wilmore" who joined the series in February 2016. She is a New York City based writer, actress, video blogger and host of the MTV web series "Decoded." Known to many online fans as Chescaleigh, Ramsey created her first viral video, "Sh*t White Girls Say...to Black Girls," in January of 2012. It garnered more than 1.5 million views in 24 hours, 5 million views in just 5 days, currently has 11 million views and has been featured on MSNBC, ABC, The Daily Mail and "Anderson Cooper Live," to name a few.

Ramsey's two YouTube channels have more than 250,000 subscribers combined and more than 26 million views. Her Chescaleigh YouTube comedy channel features a mix of song parodies, impersonations and original characters along with socially conscious and topical comedy sketches. Her Chescalocs YouTube channel focuses on beauty, natural hair care and styling. Ramsey and her videos have been featured on MTV, The New York Times, NPR, Ebony Magazine and BBC.

Joe Toplyn has written and produced comedy/talk shows for over fifteen years. He began his television career on the writing staff of Late Night with David Letterman, where he won four Emmy awards. He went on to become co-head writer of The Tonight Show with Jay Leno and head writer of Late Night with David Letterman. His other TV writing credits include the sketch show In Living Color and the comedic detective show Monk. He is the author of the book Comedy Writing for Late-Night TV.