Skip to main content
Upload Proof of Vaccination
Reminder: All students, faculty, and staff must be fully vaccinated against COVID-19 and upload proof as a condition of accessing College buildings (including the residence hall) during the 2021-2022 academic year.
Academics
February 18, 2015

To a person, they'll tell you that, "They haven't won anything yet," but there is a lot of excitement in Brooklyn Heights and a ton of attention being focused on the St. Francis College Men's Basketball team over the past few weeks. 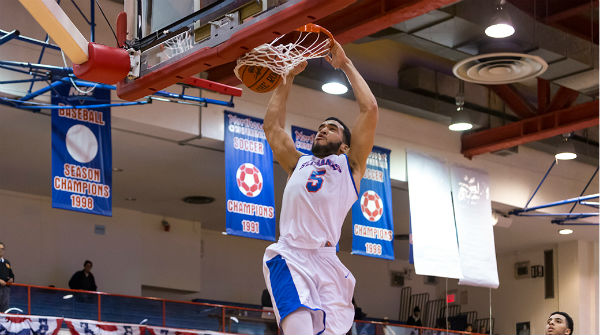 With just four games left in the regular season, the Terriers (18-9, 12-2 in the NEC) have a three game hold on first place. Which means, as long as they keep winning, they'll host all three playoff games including the Northeast Conference Championship.

Daily tabloids and local blogs started the recent fury of stories with spotlights in the Daily News and New York Post.

The New York Times followed up soon after. And USA Today most recently touted the Terriers.

Now TV is in the game as well with highlights appearing on WNBC News 4 New York last week and a full feature to appear TONIGHT (Wednesday, February 18) at 6pm.

If the Terriers win the NEC tournament, they will punch their ticket for the first time to the NCAA tournament.