The maintenance is scheduled to take place on the following days: June 21, June 22, July 11, July 13, August 1, August 3, August 16, and August 17. If you experience any problems accessing any of these applications during these dates, please understand the application may be down for migration. SFC IT will be sending out notifications when systems are back online. Thank you for your support and patience during this process.
Academics
April 5, 2017

St. Francis College hosted Professor of History Joseph Dorinson (LIU) for a talk on the legacy of Jackie Robinson on April 5, 2017, nearly 70 years after Robinson broke the color barrier in Major League Baseball and played for the Brooklyn Dodgers.

It was part of a borough wide celebration of Robinson hosted with the Brooklyn Historical Society (BHS) and National Grid to commemorate the 70th anniversary of Jackie Robinson's debut on the field for the Brooklyn Dodgers on April 15, 1947.

BHS opened a year-long exhibition titled Until Everyone Has It Made: Jackie Robinson's Legacy, which tells the story of Robinson the extraordinary athlete, and Robinson the dedicated fighter for equal rights. Among the many objects on view is the treasured Dodger's 1955 World Series Championship banner.

National Grid hosted a pop-up exhibition that tells the story of Jackie Robinson's life from April 3 to April 14.

The collaborative celebration is also an educational event for students from grade school through college. St. Francis College freshmen enrolled in a class about protest took multiple trips to BHS's Othmer Library to conduct research on the event that changed baseball. After examining artifacts and other resources they created a brochure that will be available at the two exhibitions and lecture, teaching visitors about this moment in history and how it relates to the art of protest. In addition, during the 2017-2018 school year, BHS educators will offer on-site school groups a special exhibition-based program that uses Robinson's life as a springboard to discuss segregation, social justice, and protest.

"In honoring the legacy of Jackie Robinson, we are thrilled to partner with some of Brooklyn's finest institutions. By engaging students of all ages in this celebration, we are able to impart the importance of Robinson's role in shaping American history to a new generation," said Deborah Schwartz, President of Brooklyn Historical Society. 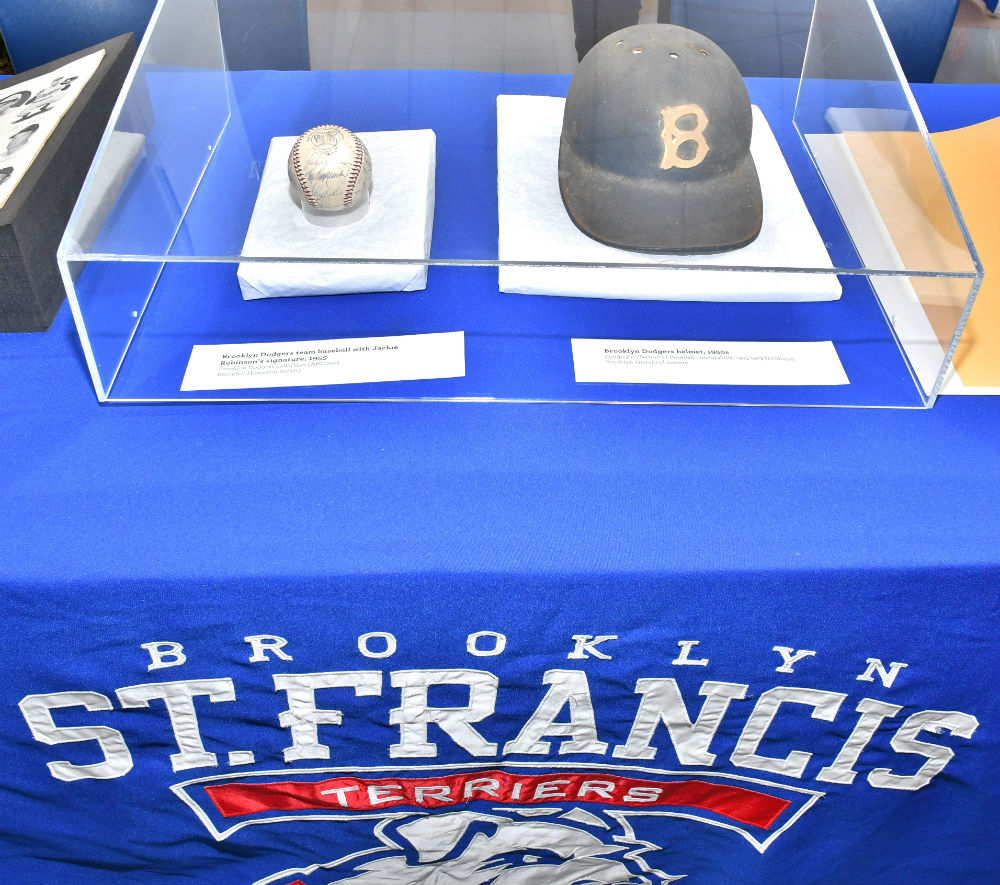 "Jackie Robinson's commitment to Brooklyn - and his perseverance and courage - paved a way into the history of baseball and the civil rights movement," said Ken Daly, President of National Grid New York. "National Grid is pleased to celebrate our shared history - as our legacy company headquarters was next to the former Dodgers headquarters, where history was made when Jackie signed his groundbreaking contract. I am so proud to work for a company that has its own long history of supporting the Brooklyn community and building a team of employees who are diverse and inclusive in every way. On a personal note, Jackie Robinson was a hero to my Dad who has special memories of being a Dodgers fan as a child and I am now privileged to share Jackie's lessons with my own four children."

"By integrating America's national pastime in 1947, Jackie Robinson paved the way for the decades of major civil rights victories that followed," said St. Francis College History Professor Sara Rzeszutek Haviland, whose students have been researching Robinson all year and designed the brochure which accompanies the exhibitions. "As a college that embraces diversity and inclusion, St. Francis is excited to participate in this community partnership to honor Robinson's life and legacy. We are also thrilled that this event has given our students the opportunity to conduct hands-on archival research and participate in such a significant celebration."

About National Grid
National Grid (LSE: NG; NYSE: NGG) is an electricity and natural gas delivery company that connects nearly 7 million customers to vital energy sources through its networks in New York, Massachusetts and Rhode Island. It is the largest distributor of natural gas in the Northeast. National Grid also operates the systems that deliver gas and electricity across Great Britain.

Through its U.S. Connect21 strategy, National Grid is transforming its electricity and natural gas networks to support the 21st century digital economy with smarter, cleaner, and more resilient energy solutions. Connect21 is vital to our communities' long-term economic and environmental health and aligns with regulatory initiatives in New York (REV: Reforming the Energy Vision) and Massachusetts (Grid Modernization.)

About St. Francis College
St. Francis College, founded in 1859 by the Franciscan Brothers of Brooklyn, is located in Brooklyn Heights, N.Y. Since its founding, the College has pursued its Franciscan mission to provide an affordable, high-quality education to students from New York City's five boroughs and beyond.

About Brooklyn Historical Society
Founded in 1863, Brooklyn Historical Society is a nationally recognized urban history center dedicated to preserving and encouraging the study of Brooklyn's extraordinary 400-year history. Located in Brooklyn Heights and housed in a magnificent landmark building designed by George Post and opened in 1881, today's BHS is a cultural hub for civic dialogue, thoughtful engagement and community outreach.

This project is generously funded with lead support from National Grid, and additional support from JP Morgan Chase and Peter O'Malley.