The maintenance is scheduled to take place on the following days: June 21, June 22, July 11, July 13, August 1, August 3, August 16, and August 17. If you experience any problems accessing any of these applications during these dates, please understand the application may be down for migration. SFC IT will be sending out notifications when systems are back online. Thank you for your support and patience during this process.
January 11, 2017

Winter Commencement Sends New Students on to Their Future

Almost one hundred graduates of the Class of 2017 celebrated St. Francis College Winter Commencement with hundreds of family and friends at St. Charles Borromeo Church in Brooklyn Heights on Monday, January 9.

Interim President of the College, Dr. Timothy J. Houlihan began the commencement ceremony with a remembrance of President Brendan J. Dugan '68, who passed away in December.

"President Dugan was born and raised in Brooklyn into an Irish immigrant family. He never forgot his roots and was fiercely proud of being an Irish Catholic kid from South Brooklyn," President Houlihan. "The College was a place Brendan saw as a home away from home... He saw our community as an extension of his family and worked to create a friendly, caring and compassionate atmosphere on campus as we went about the business of running this college."

Dr. Houlihan added that President Dugan would remind students to remember their Franciscan values and continue to create friendly and compassionate relationships in your education, careers and other endeavors.

The valedictorian for the winter commencement was Christine F. Muraco '17, an Accounting Major who graduates from the 5 year Combined Bachelors and Masters Degree program, which she completed in four and a half years.

Muraco said she appreciated the educational environment at St. Francis. "I was suddenly surrounded by determined, hardworking students that knew exactly what they wanted to do and were working hard to get there."

The first person in her family to attend college, Muraco added that, "When I saw an opportunity, I went for it. I jumped on any chance I had to learn more and better myself. That is an extremely important lesson in life. You have to go for things, seize opportunities, live life to the fullest."

Christine is now working full time at CBS Corporation in their tax department, where she originally interned. In fact, CBS hired Christine full time and she completed her final semester balancing her new career with a full class load.

Muraco was one of several graduates of the Accounting Program who now go on to jobs at well-respected accounting firms and corporations. Kelsey Papanicolaou '17 will begin working at PWC while Evelyn Bedoya '17 soon starts at PKF O'Connor Davies.

The Commencement Address was delivered by Dr. Evelyn A. Wolfe, Professor and Chair of the Department of Chemistry and Physics. Dr. Wolfe spoke about the importance of taking classes outside of your major, or specific interests. 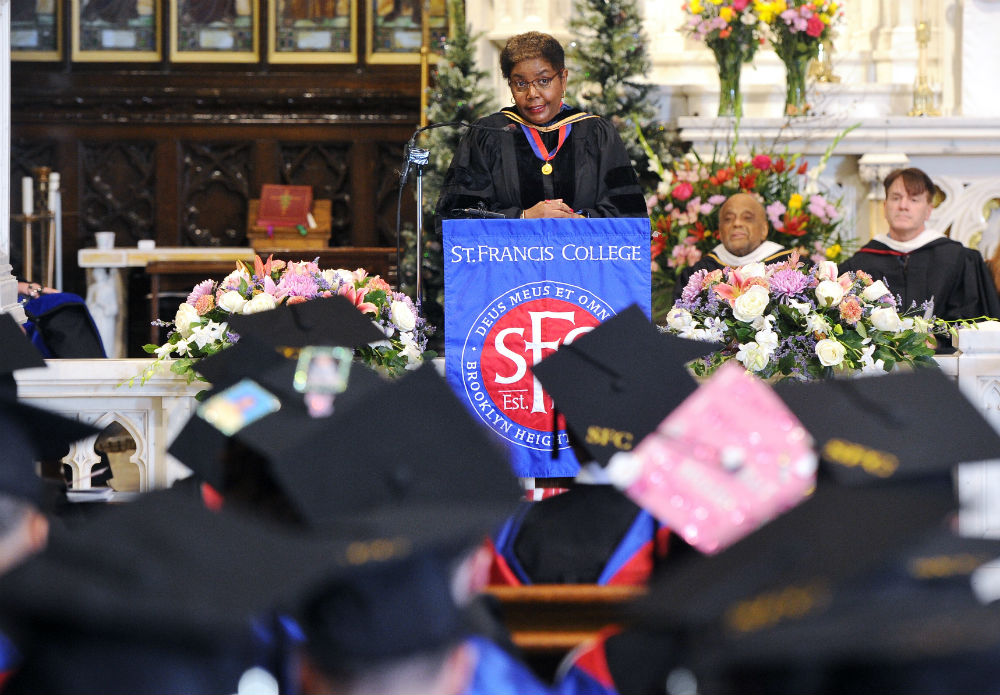 "The education you receive here at St. Francis College is your toolbox. And it is wise to fill it with as many different tools as possible," said Dr. Wolfe who joined St. Francis College in 1995 and become Chair just one year later. "The world is varied and changeable. The tools should help you to understand and interpret data, reason abstractly, think critically, contribute creatively, and appreciate diversity and culture."

Before Commencement, a Baccalaureate Mass was celebrated by Fr. Brian Jordan OFM, Director of the St. Francis College Campus Ministry. He also honored the memory of President Dugan by reminding those in attendance that it was President Dugan who stressed the importance of holding a Baccalaureate Mass immediately before Winter Commencement. Fr. Brian said that President Dugan believed in the importance of everyone coming together to pray, no matter their religion, as a way to express the unity of the entire St. Francis College family. 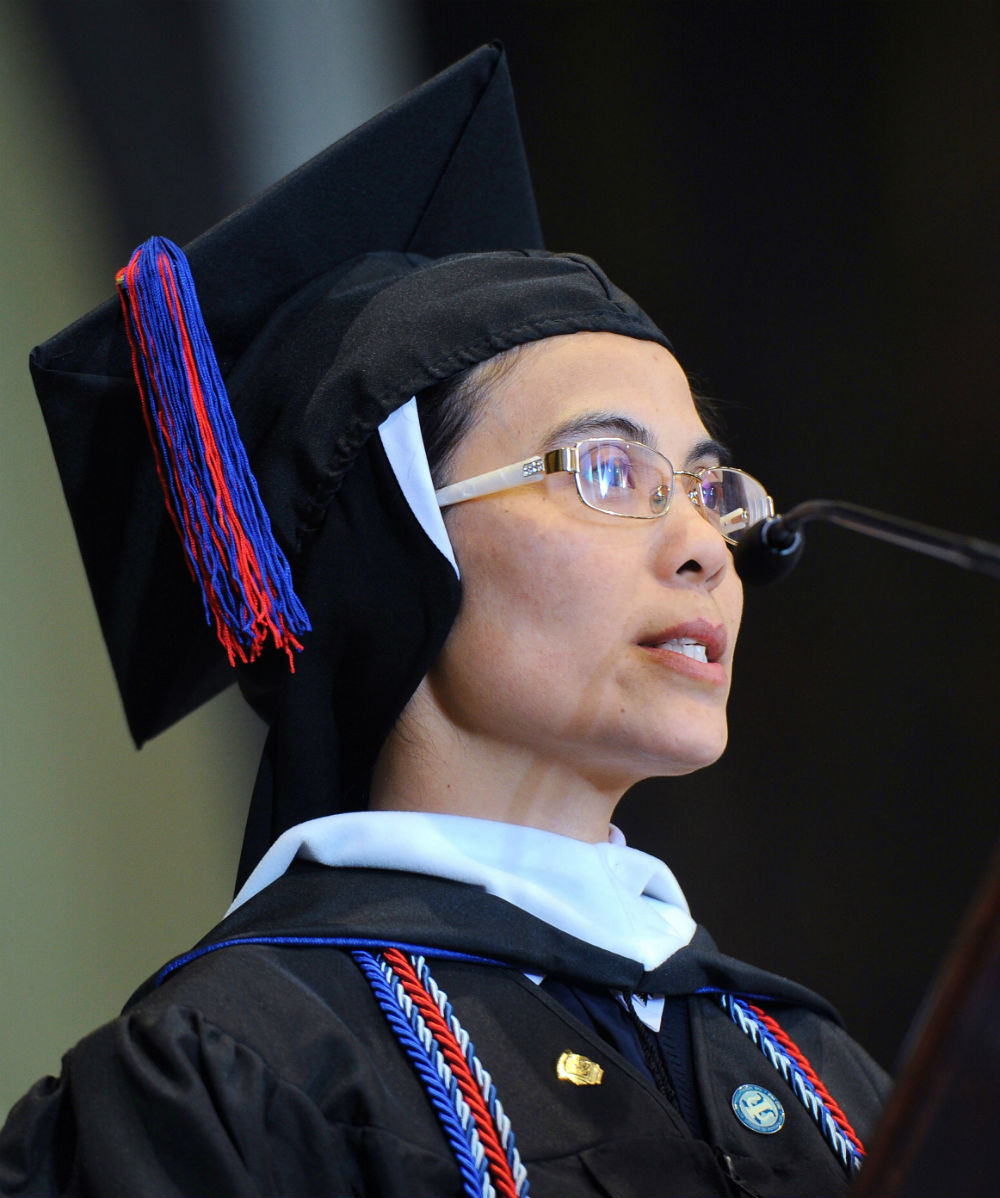 Sr. Mary Diep Vu, a Psychology Major and member of the Duns Scotus Honor Society graduates Magna Cum Laude. She came to St. Francis College from Lovers of the Holy Cross in Phat Diem Diocese, a farming region a few hours south of Hanoi, Vietnam. Her journey to Brooklyn began after a sponsor from the United States based Formation Support for Vietnam brought her and Sr. Maria Yeu to Houston, TX where they enrolled in community college to take ESL courses. She plans to use her psychology degree to help change lives. "There is not enough help for mental health issues in Vietnam. The culture is not open to it. Our hope is that people will feel comfortable talking with a Sister about their problems."

Mazaharul Islam is a Biology Major with a passion for environmental research. Under Professor Alison Dell, his mentor and the person who ignited his love for research, Mazaharul studied what potentially harmful environmental pollutants could be found in Newtown Creek and tried to determine the effects they could have on local wildlife. His research discovered high levels of copper in the water. He then exposed zebrafish to copper and found high rates of birth defects and lethality. Mazaharul presented his findings at the 2015 MACUB Conference at Montclair State University, as well as twice at St. Francis College, once was after receiving an honor at Student Recognition Day. He currently tutors and leads math workshops at a CUNY college and is applying to graduate and doctoral programs to achieve his goal of conducting research to better the world.

Christina Somma is an Education Major who will soon begin working as a full-time substitute at a public school in Sunset Park and plans to begin graduate school in the fall. She has already completed all her requirements to become a certified New York State teacher. Christina also tutors students from pre-k through 12th grade after school and teaches at an education enrichment program. 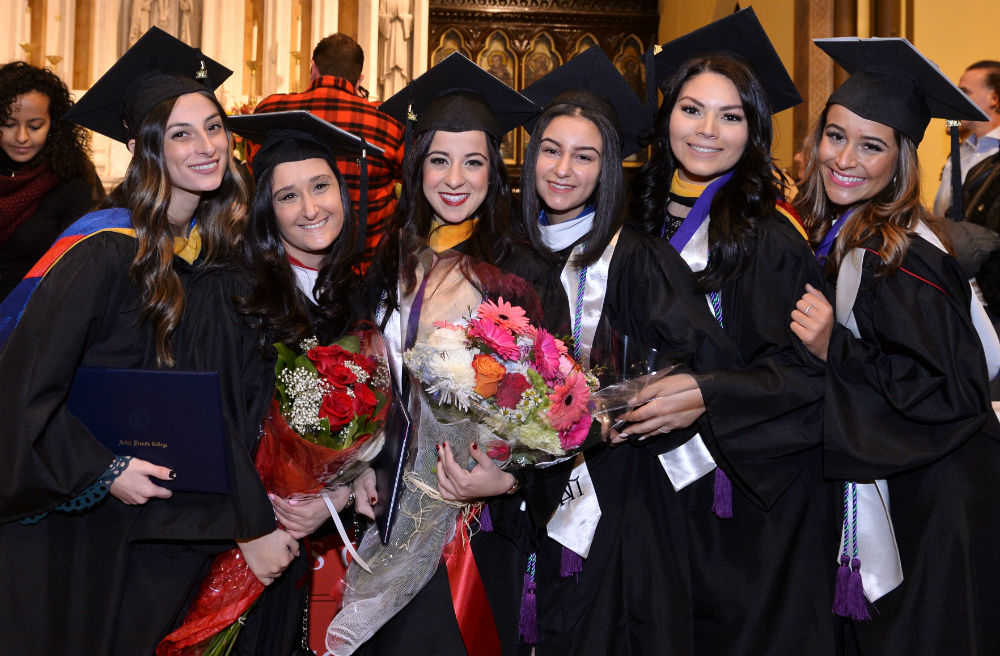 Frank Jankowski is a Communication Arts Major with a concentration in Digital Media. A transfer student from the University of Tampa, Frank was able to secure three internships while at St. Francis, with Magilla Enertainment, the Disney College Program and at Saturday Night Live. He said Professor "Michelle Steven offered me a level of support and encouragement, with regard to my career aspirations in television, that will allow me to pursue my big dreams long after leaving this small college." Those career goals are already one big step closer. Frank has just been accepted to the CBS Page Program. He also performs stand-up comedy around the city.

Since joining St. Francis College in 1995, Dr. Evelyn Wolfe has developed several unique academic programs that rely on the impact of emerging technology and health. Dr. Wolfe has received grants from the National Science Foundation (NSF), Hewlett Packard, and American Chemical Society (ACS) to purchase and update state of the art instruments such as the GC-MS (gas chromatography), HPLC and NMR. She has published her work in numerous peer reviewed journals and was the recipient of the Dr. Henry McBay Outstanding Professor Award from the University of California, and the Project Kaleidoscope Faculty Award from the NSF.