Skip to main content
Upload Proof of Vaccination
Reminder: All students, faculty, and staff must be fully vaccinated against COVID-19 and upload proof as a condition of accessing College buildings (including the residence hall) during the 2021-2022 academic year.
Student Life
April 7, 2014

With the support of one of the biggest names in TV News, Tom Brokaw, and the President of National Grid, New York, Kenneth D. Daly, St. Francis College raised more than $720,000 at the 53rd Annual Charter Award Dinner held April 1 at the New York Marriott Marquis.

Both honorees also lent their names and financial support to two scholarships; the Tom Brokaw Veterans Scholarship and the Kenneth D. Daly '88 Scholarship. . 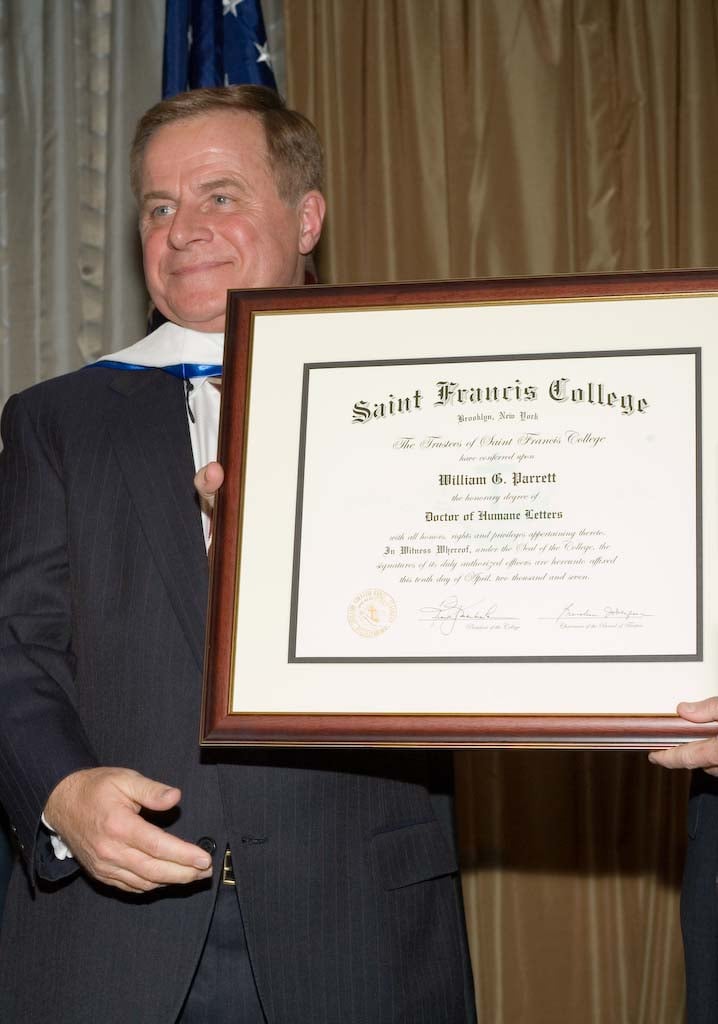 The Dinner was emceed by WNBC News Anchor David Ushery, a new friend to the College, who brought an upbeat and jovial touch to the night. "The enthusiasm of your students and this community really touches me and is extraordinary," he commented after having spent only a few hours with St. Francis alumni and current students.

Mr. Brokaw, the long-time host of "NBC Nightly News with Tom Brokaw" was unable to attend due to illness but sent along a note saying that St. Francis was "one of America's premier small institutions in the middle of the hottest borough in the country." 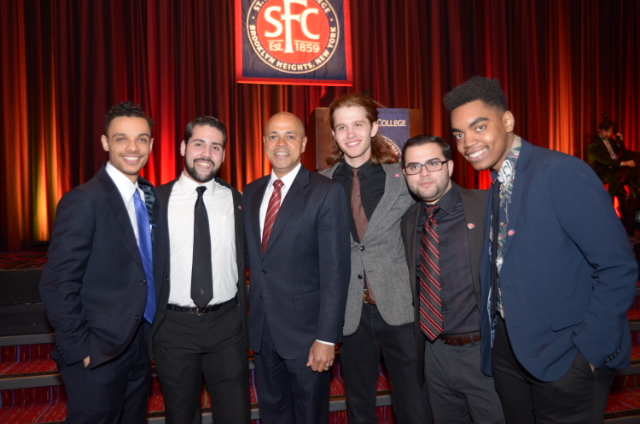 Mr. Daly graduated from St. Francis in 1988 before beginning his 25 year rise up the ranks of National Grid and its predecessors Brooklyn Union Gas and KeySpan. He said he remembers the day he heard about his scholarship to attend the College, 30 years ago, like it was yesterday.

"I was playing sports up at the park with my friends. It was before cell phones and my mom actually ran up to the park and said Bro. George is on the phone and he's got a scholarship and you gotta get right down there! And here I am today."

Daly said this scholarship, which is the second one he established in his name, is meant to give another student the same opportunity he had.

"To have these two honorees come out to support our students shows the value they place on helping others. It's a value that lies at the heart of the Franciscan education we provide," said Brendan J. Dugan '68, President of St. Francis College.

The Charter Award Dinner began in 1962 by the St. Francis Board of Trustees to commemorate New York State granting the College a charter and the right to confer diplomas, honors and degrees. For 53 years, the Charter Award Dinner has been the College's premier fundraising event and has raised millions of dollars to support scholarship programs and further the educational mission at St. Francis.

Biographies
Tom Brokaw is one of the most widely known news reporters and anchors of all time, spending his entire career with NBC News. Brokaw started out in Los Angeles in 1966, where he covered Ronald Reagan's first run for public office, the rise of the Sixties counter culture, the assassination of Bobby Kennedy and the 1968 presidential campaign.

He took over "Meet the Press" for the 2008 campaign when his close friend and colleague Tim Russert died.

Brokaw's impressive list of firsts includes the first interview with Mikhail Gorbachev and the first network to report on human rights abuses in Tibet... with an exclusive interview with the Dalai Lama. He's also the only American network anchor to report from Berlin the night the Berlin wall came down.

In 1998 Brokaw published his first book, THE GREATEST GENERATION, one of the most popular nonfiction books of the 20th century. He followed that with five other books, including BOOM! VOICES OF THE SIXTIES and, most recently, THE TIME OF OUR LIVES.

Brokaw has won every major award in his craft, including Peabody, Duponts, Emmys and lifetime achievement recognition.

Kenneth D. Daly '88 is a real success story for St. Francis College. He graduated with an English degree in 1988 and rose up the ranks to become President of the New York business of National Grid. He oversees a company that provides energy for about 4 million customers in Brooklyn, Queens, Staten Island, Long Island and upstate New York.

Daly first joined National Grid as a Management Trainee in 1988. The company was then Brooklyn Union Gas, later becoming KeySpan and now National Grid. Over the course of 25 years with National Grid he spent two years in London as Group Financial Controller after having worked in various departments including Finance, Human Resources and Customer Relations. Daly is very involved in civic organizations and serves and the executive sponsor of National Grid's employee volunteer program, "Power to Serve."

Daly earned an MBA in Finance from St. John's University and an MS in Human Resource Management from New York University. He achieved the distinguished Chartered Financial Analyst (CFA) designation in 2002. He has been the Director of the St. John's University Executive-in-Residence Program since 1992. He is the past Chairman of the Kingsborough Community College Board of Directors, a former member of the Junior Achievement Board of Directors and United Way Campaign Co-Chair. Daly is also a member of the David Rockefeller 'Fellows Program,' the Long Island Energeia Partnership, the British American Business Council Board and Advanced Energy Research and Technology Center (AERTC) Board.

Through it all Daly has never forgotten about St. Francis College. He has helped students gain internships and scholarships, been a mentor to many and taught as an adjunct professor for 20 years.

Daly is also a member of the Board of Trustees.