Skip to main content
Upload Proof of Vaccination
Reminder: All students, faculty, and staff must be fully vaccinated against COVID-19 and upload proof as a condition of accessing College buildings (including the residence hall) during the 2021-2022 academic year.
Athletics
December 19, 2016

It is with great sorrow that St. Francis College announces the passing of President Brendan J. Dugan, a graduate of the College class of 1968 on December 18, 2016. He was 69.

President Dugan worked in commercial banking for 40 years before becoming President of St. Francis College on July 1, 2008. Before that, he was Chairman of the College's Board of Trustees and was instrumental in completing the $40 million Campaign for Big Dreams, a transformational project that resulted in the building of the Anthony J. Genovesi Athletic Center, the Academic Center, and set the stage for the Eileen C. Dugan Life Sciences Center which opened during his presidential tenure and houses the College's fast-growing Nursing program. 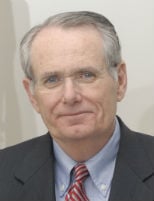 President Dugan was honored December 7, by the Roman Catholic Diocese of Brooklyn at the 2016 Bishop's Christmas Luncheon with the Emma A. Daniels Benefactor Award. The honor was accepted by his son Joseph Dugan, Principal of Cristo Rey Brooklyn High School.

Reading from President Dugan's comments that afternoon, Joseph said, "Barbara [Dugan] and I would not be the people we are today were it not for our Catholic faith and the Catholic education that we have received throughout our lives. It has formed our identity, and that of our family, reinforcing the values and beliefs that our parents lovingly instilled in our homes."

President Dugan was involved with the Diocese for many years, serving on the Finance Council, as trustee for the St. Mary Star of the Sea Parish, and spending years on the board of the Futures in Education Foundation and Bishop Loughlin Memorial High School.

Last week President Dugan was also honored by the Brooklyn Chamber of Commerce at its Annual Gala. His son Patrick Dugan '01, a Senior Director at Cushman & Wakefield, accepted the award Thursday night on behalf of his father.

"When you hung around with Brendan, unless you were in the banking business you really didn't really know he was a banker. Not only that, you didn't even know he was CEO of a bank," said Domenick A. Cama, Senior Executive Vice President & Chief Operating Officer of Investors Bank who grew up with President Dugan in Carroll Gardens. "He's a pretty humble guy. He's a mentor to me also. He is a person that exhibits humility and modesty. Those are the two lessons that I've learned, the two words that I've learned from Brendan from him in his career."

During his four decades of banking, President Dugan served at a number of institutions, his most recent banking position was Chairman & CEO of Sovereign Bank's Metro NY/NJ Division. Sovereign had recently acquired Independence Bank where Mr. Dugan served as a senior executive since 2003. Prior to joining Independence, he served as Chief Operating Officer of Citibank Commercial Markets (2001-2003), President of European American Bank (1991-2001) and President and Chief Executive Officer of NatWest USA (1989-1991).

In 2013 he was able to put his vast banking experience to work again as a member of the Board of Directors of Investors Bank.

Upon being named President of St. Francis College Mr. Dugan made clear that his mission was "to offer working class families a College that provides a great education at an affordable price and one that makes sure its graduates are not just prepared to enter the job market but will be productive in all aspects of their lives."

His strong belief in helping others extended well beyond the College and the Diocese. He was a board member of the Brooklyn Chamber of Commerce, the Downtown Brooklyn Partnership, the Brooklyn Academy of Music (BAM), the Commission on Independent Colleges and Universities, and the Brooklyn Bridge Park Conservancy. In the past he was active with the New York Bankers Association and was a member of its Board of Directors and Legislative Policy Committee.

In June 2009, President Dugan was inducted into the Pontifical Order of the Knights of St. Gregory the Great by His Holiness Pope Benedict XVI.

President Dugan cherished his Irish heritage. His family hailed from Kilcar County, Donegal. He was honored by both the St. Patrick's Society of Brooklyn and The Great Irish Fair.

A wake honoring President Dugan will be held at:

The funeral will be held at:

In lieu of flowers, the family requests donations be made to the Brendan J. Dugan '68 Scholarship Fund.

Brendan J. Dugan is survived by his wife Barbara A. Dugan, his sons Joseph (Stephanie), Michael and Patrick (Christina), and his six grandchildren (Brendan C., Ryan, William, Helena, Colin, and Mary. He is also survived by his sister Patricia Barry and brother Brian.