Skip to main content
Upload Proof of Vaccination
Reminder: All students, faculty, and staff must be fully vaccinated against COVID-19 and upload proof as a condition of accessing College buildings (including the residence hall) during the 2021-2022 academic year.
Academics
September 24, 2009

Board of Trustees Honors Couple for Hard Work & Dedication

It was at last year’s Spring Commencement when then St. Francis College Board of Trustees Chairman Brendan J. Dugan ’68 surprised Frank J. ’62 and Mary Macchiarola with the announcement that the College’s new Academic Center would be adorned with their names in honor and appreciation of their commitment and contributions to the College. Now, as President of the College, Mr. Dugan formally dedicated the Frank and Mary Macchiarola Academic Center with a special celebration on Friday, September 25.

“Today is a piece of heaven because I see here people who I love, admire and respect and rely on. You’ve all been very generous to me and the school,” said Dr. Macchiarola, the current Chancellor of the College. “The naming of the building - that's pretty neat… It has a library. It has a communications center. It has the heart and soul of what this school is about. It is a facility for our students. That you named it for Mary and for me is a wonderful honor.”

“All of you have been an integral part of what’s happening today. You are the ones who have been with us along the journey,” added Mary Macchiarola. “You have made our lives journey so wonderful, so meaningful.” 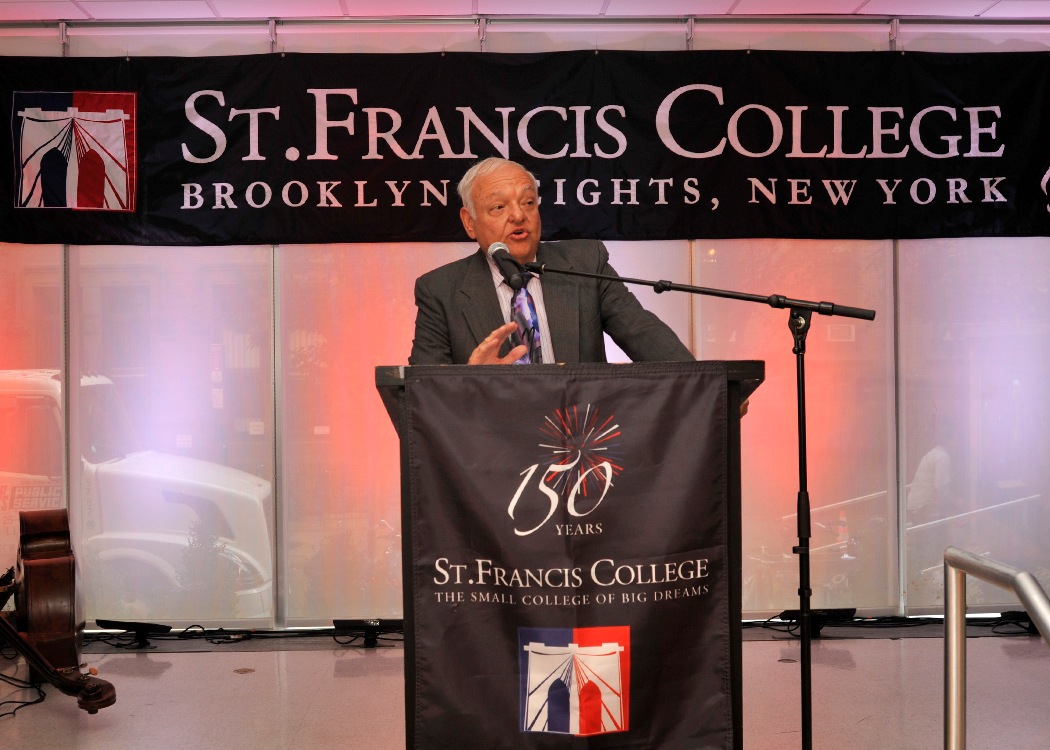 Frank Macchiarola served as the St. Francis College President for 12 years before becoming the College’s Chancellor a title he first held for five years heading up the New York City Public School System under Mayor Ed Koch. During his tenure at St. Francis, Dr. Macchiarola successfully built on the College’s rich Franciscan Tradition and led St. Francis into the 21st Century with fundraising and leadership that enabled the College to greatly expand scholarships and build, among other large-scale projects, the academic center that now bears his name.

In addition to the more than twenty years Mary T. Macchiarola spent as a kindergarten teacher and Director of Religious Education, she also devoted years supporting the students, faculty and administrators at St. Francis College with both time and money. She is also a member of the Alumnae Association of St. Joseph’s College, the Knights and Ladies of the Holy Sepulchre, the Brooklyn Diocesan Committee on Education (1990-1996), a Board Member of the Human Resources Committee of Catholic Charities (2004-Present), a member of the Advisory Board of Flatbush Catholic Academy (2006-2009) and a member of the Fontbonne Hall Academy Board of Trustees since 2005.

The work on the Academic Center was handled by Liv Art, Inc, headed by Amy Kasindorf and Al Mantaring who oversaw the project from the original graphic layout to the creation of full size masks and the chiseling and painting of the letters. Working precisely and methodically for 8 hours a day over the course of two weeks, Bob Carpenter handled most of the chiseling, with no room for error. The only way to fix any mistake is to ship another 300 pound piece of granite, remove the old one and start the meticulous work all over again.