Skip to main content
Upload Proof of Vaccination
Reminder: All students, faculty, and staff must be fully vaccinated against COVID-19 and upload proof as a condition of accessing College buildings (including the residence hall) during the 2021-2022 academic year.
Alumni
August 16, 2017

A diverse collection of six award winning authors has been named to the St. Francis College $50,000 Literary Prize Short List, one of the richest literary prizes in the country. The authors are: 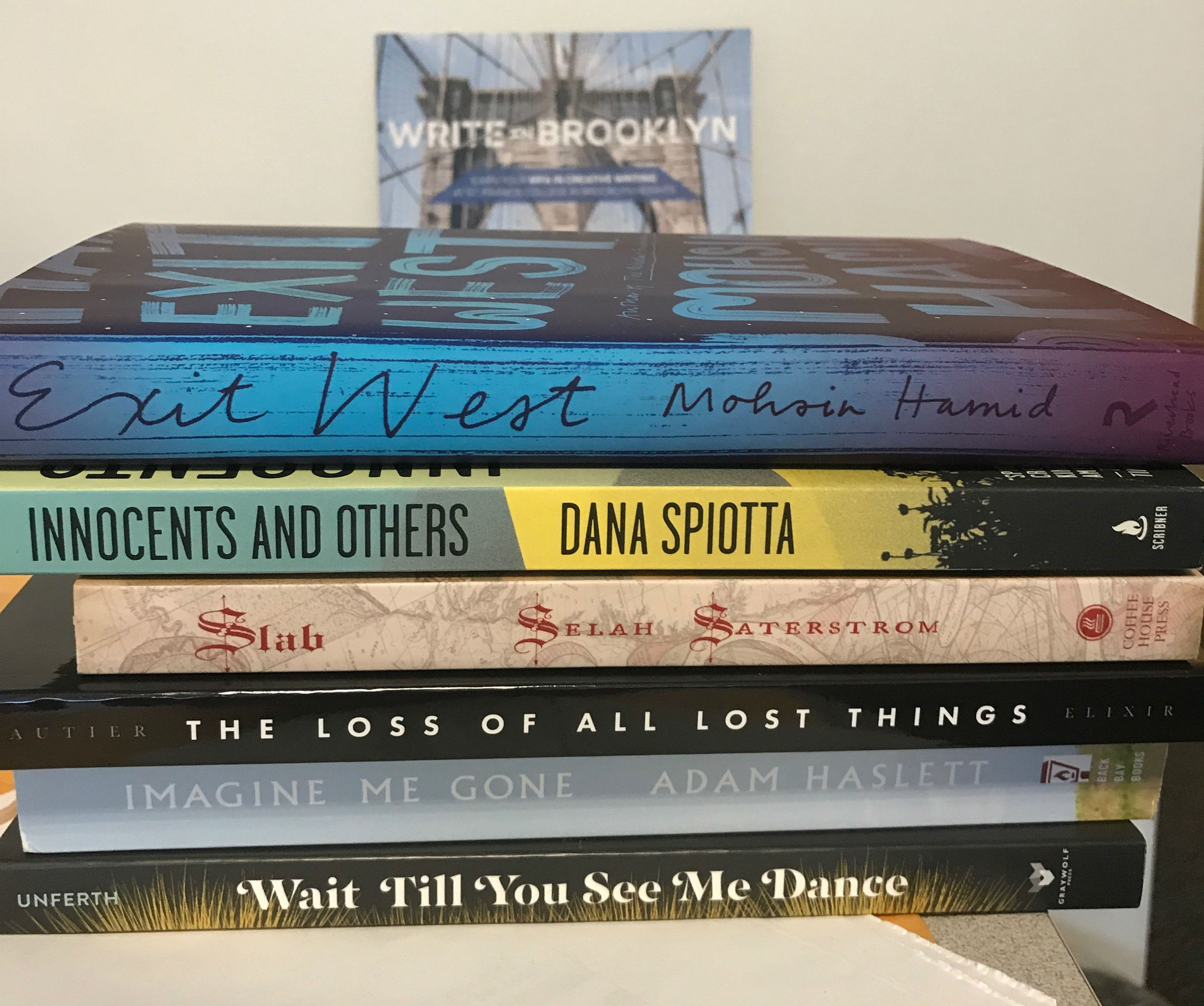 More than 185 authors submitted entries for the award, which seeks to draw attention to mid-career writers at a time when the support of publishers, publications, and fans often wanes.

"At this time in their careers, many writers are developing their strongest voice, and publishing their best work," said St. Francis College English Professor Ian Maloney, Director of the St. Francis College Literary Prize. "The problem is support for mid-career authors doesn't match the quality of their work. We want to raise awareness of these great writers at this critical point in their careers."

With the number of authors cut to six, the Jury Prize members; Ellen Litman (The Last Chicken in America), Jeffery Renard Allen (Song of the Shank), and René Steinke (Friendswood), will now decide on the winner, which will be announced as part of the Brooklyn Book Festival, held September 17.

"I've spent the past six months reading (and re-reading) so many amazing and excellent books. It was exciting to have the chance to survey this moment in contemporary fiction, and thrilling to discover how much spectacular writing there is right now," said Steinke. "A lot of the books we've read deserve more recognition, and it was painful to have to settle on a short list. But each of these six books is fantastic in its own way, and I hope this recognition will bring them many more readers."

The $50,000 Literary Prize compliments the programming at St. Francis College which brings a number of high-profile and rising star authors to campus every year through the Walt Whitman Writers Series and with the new Low-Residency MFA in Creative Writing featuring mentors, Marlon James (A Brief History of Seven Killings) and Annie Finch (Spells: New and Selected Poems). More Information at sfc.edu/mfa.

Amina Gautier is the author of three award-winning short story collections: The Loss of All Lost Things, Now We Will Be Happy, and At-Risk. More than eighty-five of her short stories have been published and reprinted extensively. Gautier has been the recipient of the Crazyhorse Prize, the Danahy Fiction Prize, the Jack Dyer Prize, the William Richey Prize, the Schlafly Microfiction Award, and the Lamar York Prize in Fiction. A graduate of Stanford University and the University of Pennsylvania and a scholar of 19th Century American literature, her critical essays and reviews have appeared in numerous journals and reviews. Professor Gautier has taught at a number of universities including the University of Pennsylvania, Marquette University, and the MFA program at the University of Miami. Amina Gautier is a native New Yorker who currently divides her time between Chicago and Miami.

Mohsin Hamid is the internationally bestselling author of Moth Smoke, The Reluctant Fundamentalist, How to Get Filthy Rich in Rising Asia, Discontent and its Civilizations, and Exit West. His award-winning novels have been adapted for the cinema, shortlisted for the Man Booker Prize, and translated into more than thirty languages. His essays and short stories have appeared in The New York Times, The Washington Post, and The New Yorker, among many other publications. Hamid now resides in Lahore, his birthplace, after living for a number of years in New York and London.

Adam Haslett is the author of the short story collection You Are Not a Stranger Here, which was a Pulitzer Prize and National Book Award finalist; the novel Union Atlantic, winner of the Lambda Literary Award and shortlisted for the Commonwealth Prize; and his most recent, the novel Imagine Me Gone. His books have been translated into eighteen languages, and his journalism and fiction have appeared in The Financial Times, Esquire, New York Magazine, and Der Spiegel among other publications. He has been awarded the Berlin Prize, a Guggenheim fellowship, and the PEN/Malamud and PEN/Winship Awards. In 2016, he received the Strauss Living Award from the American Academy of Arts & Letters. A graduate of Swarthmore College, the Iowa Writers' Workshop, and Yale Law School, he has been a visiting professor at the Iowa Writers' Workshop and Columbia University.

Selah Saterstrom is the author of the novels Slab, The Meat and Spirit Plan, and The Pink Institution, all published by Coffee House Press. Widely published and anthologized, she is also the author of Tiger Goes to the Dogs, a limited edition letterpress project published by Nor By Press. Her book of essays, Ideal Suggestions: Essays in Divinatory Poetics is forthcoming from Essay Press. She is the editor of Soul Collections, an anthology of prose and poetry written by at-risk teenagers in North Carolina and she donated a portion of her proceeds from The Meat and Spirit Plan to Our Voice, a nonprofit crisis intervention agency in Western North Carolina and to the Kim Duckett Fund for Women. She teaches and lectures across the United States and is the Director of Creative Writing at the University of Denver.

Dana Spiotta is the author of Innocents and Others; Stone Arabia, A National Books Critics Circle Award finalist; and Eat the Document, a finalist for the National Book Award and a recipient of the Rosenthal Foundation Award from the American Academy of Arts and Letters; and Lightning Field (2001). Spiotta was a Guggenheim Fellow, a New York Foundation for the Arts Fellow, and won the 2008-9 Rome Prize from the American Academy in Rome. She lives in Syracuse with her daughter Agnes and teaches in the Syracuse University MFA program.

Deb Olin Unferth is the author of the collection of stories Minor Robberies, the novel Vacation, and the memoir, Revolution: The Year I Fell in Love and Went to Join the War, which was a finalist for a 2012 National Book Critics Circle Award. Her work has appeared in Harper's, McSweeney's, NOON, the Paris Review, and Tin House. She lives in Austin, Texas. For more than ten years, Deb Olin Unferth has been publishing startlingly askew, wickedly comic, cutting-edge fiction in magazines such as Granta, Harper's Magazine, McSweeney's, NOON, and the Paris Review.

Slab - On a slab that's all Katrina left of her Mississippi home, Tiger—stripper, felon, best-selling author—tells us of her days dancing as Helen Keller, her grandfather's suicide, a serial killer duo from the 18th century, and the best recipe for red velvet cake. And out of these floating anecdotes comes a portrait of a fallen biblical landscape of struggle and sin.

Innocents and Others - two women grow up in LA in the 80s and become filmmakers. Meadow and Carrie have everything in common—except their views on sex, power, movie-making, and morality. Their friendship is complicated, but their devotion to each other trumps their wildly different approaches to film and to life.

The Loss of All Lost Things - this short story collection illuminates the beauty that can be found in inconsolable loss. Amina Gautier leads us through terrible reality but leaves us with the promise of hope and redemption.

Imagine Me Gone - a fiercely intimate story of a family facing the ultimate question: how far will we go to save the people we love the most? With his striking emotional precision and lively, inventive language, Adam Haslett has given us something rare: a novel with the power to change how you see the most important people in your life.

Wait Till You See Me Dance - several extraordinary longer stories as well as a selection of intoxicating very short stories. A Deb Olin Unferth story lures you in with a voice that seems amiable and lighthearted, but it swerves in sudden and surprising ways that reveal, in terrifying clarity, the rage, despair, and profound mournfulness that have taken up residence at the heart of the American dream.

Ellen Litman is the author of two novels, Mannequin Girl and The Last Chicken in America, a finalist for the 2007 LA Times Art Seidenbaum Award for First Fiction and the 2008 New York Public Library Young Lions Award. Her work has appeared in Best New American Voices, Best of Tin House, and elsewhere. She currently teaches at the University of Connecticut, where she serves as associate director of the Creative Writing program. More at http://ellenlitman.com.

Jeffery Renard Allen is Professor of Creative Writing at the University of Virginia. He is the author of two collections of poetry, Stellar Places (Moyer Bell, 2007) and Harbors and Spirits (Moyer Bell, 1999), and three works of fiction, the widely celebrated novel, Rails Under My Back (Farrar, Straus, and Giroux, 2000), which won The Chicago Tribune's Heartland Prize for Fiction, Song of the Shank (Graywolf Press, 2014), and the story collection Holding Pattern (Graywolf Press, 2008), which won the Ernest J. Gaines Award for Literary Excellence. His other awards include a Whiting Writer's Award, a support grant from Creative Capital, The Chicago Public Library's Twenty-first Century Award, a Recognition for Pioneering Achievements in Fiction from the African American Literature and Culture Association, the 2003 Charles Angoff award for fiction from The Literary Review, and special citations from the Society for Midlands Authors and the Zora Neale Hurston/Richard Wright Foundation. He has been a fellow at The Dorothy L. and Lewis B. Cullman Center for Scholars and Writers at The New York Public Library, a resident at the Rockefeller Center in Bellagio, Italy, and is a John Simon Guggenheim Foundation. More at www.jefferyrenardallen.com.

René Steinke's most recent novel, Friendswood (Riverhead), was shortlisted for the St. Francis College Literary Prize and named one of National Public Radio's "Great Reads" of 2014. Her previous novel, Holy Skirts, an imaginative retelling of the life of the artist and provocateur, Baroness Elsa von Freytag-Loringhoven, was a Finalist for the National Book Award. Her first novel is The Fires. Steinke is the recipient of a 2016 Guggenheim Fellowship. She is the former Editor of The Literary Review, where she remains Editor-at-Large. She has taught at the New School and at Columbia University, and she is currently the Director of the Low-residency MFA program in Creative Writing at Fairleigh Dickinson University. She lives in Brooklyn. More at http://www.renesteinke.net.