The maintenance is scheduled to take place on the following days: June 21, June 22, July 11, July 13, August 1, August 3, August 16, and August 17. If you experience any problems accessing any of these applications during these dates, please understand the application may be down for migration. SFC IT will be sending out notifications when systems are back online. Thank you for your support and patience during this process.
Academics
July 10, 2016

A little wind couldn't blow away the good feelings at Brooklyn Bridge Park May 10 for St. Francis College's Spring Commencement Ceremony honoring the Class of 2016.

With the Brooklyn and Manhattan skylines serving as a backdrop, two valedictorians, two special guests, nearly 350 graduates, and hundreds more friends and family descended on the park for the celebration.

Many of those graduates filled St. Joseph's Co-Cathedral in Brooklyn the night before for a Baccalaureate Mass where The Most Reverend Nicholas DiMarzio, Bishop of Brooklyn was the main celebrant.

The Undergraduate Valedictorian for the ceremony, Dragana Dzigurski '16, a Communication Arts major with a concentration in English and a Minor in Spanish, told her classmates, "I have never seen a community such as this one, a community that embraced foreigners, like myself, and facilitated friendship among strangers of all walks of life. For me this was the quality that made St. Francis truly stand out from all the rest."

Dragana is a member of the Duns Scotus Honor Society and Communications Honor Society Lambda Pi Eta. She also played on the St. Francis Tennis Team, sang in the College's Choir, was a member of the International Students Club and worked for the Departments of Student Activities and Career Development. Dzigurski plans to attend graduate school for Spanish, a language she fell in love with while studying abroad in Segovia, Spain. It is one of five languages she speaks. Ultimately, she would like to be a translator at the United Nations. She credits professors Sintia Molina and Bro. Edward Wesley with providing her with guidance and mentorship while in College and thanks her brother Marko for helping get through the long stretches away from their home in Novi Becej, Serbia.Marko received his undergraduate degree from St. Francis in 2014 and is now pursuing his Master's Degree in Accounting at the College.

Bookending the awarding of the degrees, the Class of 2016 also heard from Valedictorian for Graduate Programs, Theresa Franchi '16. "As an Endowed Scholarship recipient I have learned so much about the spirit of giving. It's not about what we can do for ourselves. It's about what we can do for others and our community," said Franchi. "We can all push boundaries to make this world a better place, even in small ways."

Theresa is in the combined Master's and Graduate Program for Accounting and is also the second in her family to attend St. Francis. Her sister Annmarie '11 is a teacher at PS 153. She says after attending an Open House she found the College reminded her of her warm, traditional Italian family, and that people really seemed to care about each other. During her time at the College, Theresa was president of the Accounting Society and a member of the Accounting Honor Society. She completed two internships, with JPMorgan Chase and Deloitte, and will begin working for Deloitte as a full time tax consultant upon graduation. 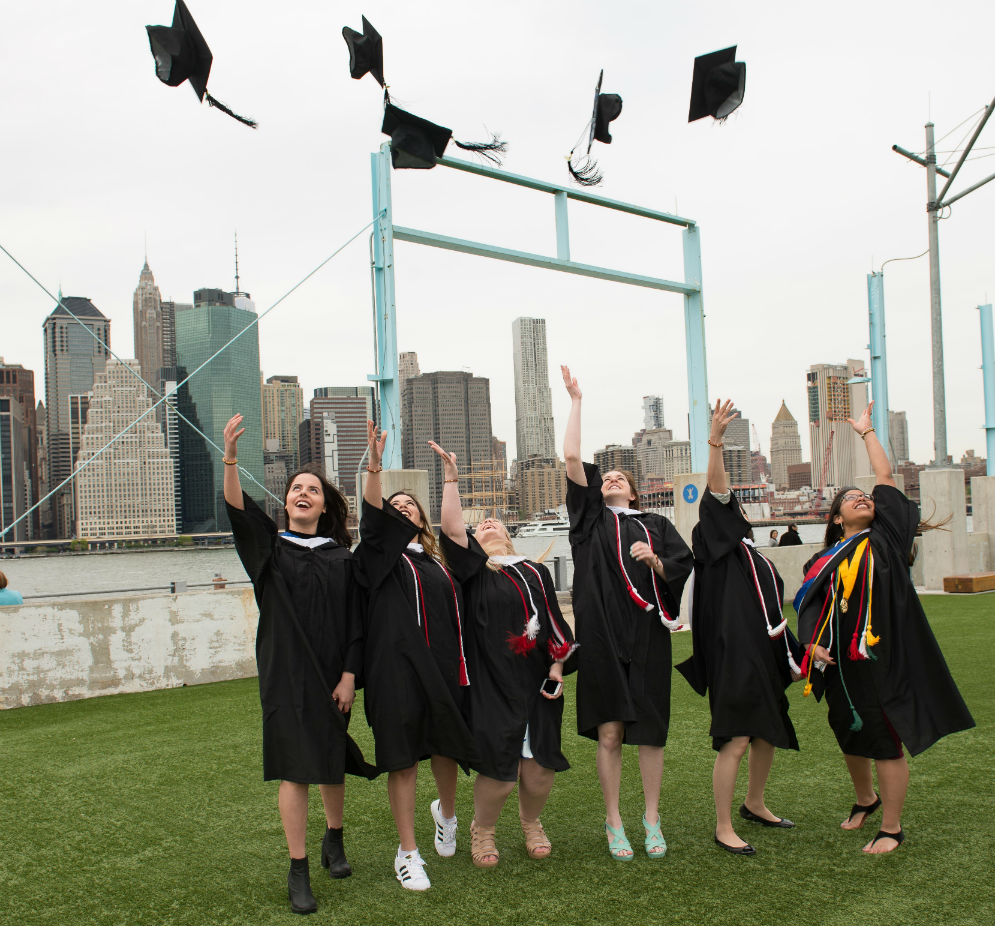 Offering the Keynote Address at Commencement was Rep. Peter T. King '65, congressman from New York's 2nd District on Long Island. Congressman King is a proud graduate of St. Francis who has been actively involved with the College for many years. He was introduced by Drewanne Shubeck '16 who interned in Rep. King's office last summer, and Michelle Provenghi '16 who also had an internship on Capitol Hill.

The College honored President of the Brooklyn Historical Society Deborah Schwartz with a Doctor of Humane Letters honoris causa as recognition for her leadership over the past 10 years overseeing a major expansion in programming at the Historical Society.

More information can be found at sfc.edu/commencement.

Among the students who graduated are:

Mpei Moeketsi '16 was 10 years old, a student at Sediba-Sa-Tsebo Primary School in South Africa when her principal and teachers selected her to be part of the International Children Outreach Ministry. Now twelve years later, with the help of ICOM, Emmanuel Baptist Church, and financial support from her guardian in the United States, Denise Sherrier, she will receive her Bachelor's Degree in Business Management. Mpei was President of the African Cultural Club for three years and was active in the Student Government Association and Caribbean Students Association. She is now studying for her Real Estate License as well as the LSAT with hopes of entering law school next year. "Neither of my parents finished high school and life hasn't always been easy for us. I never not once, thought that I, a little girl from the townships, would be a college graduate in New York City!"

Danielle Nickolauk '16, a Biology major, will be working towards her Master's Degree in Education at Teachers College Columbia University in the spring. She hopes to also earn a Ph.D. and eventually teach the Sciences on the college level. Danielle was a member of the National Science Honor Society Chi Beta Phi and received the Julie '79 and Anne '79 Kelly Endowed Scholarship scholarship while attending St. Francis. She has also volunteered at her local hospital on the pediatric ward for the past four years. "I really enjoy the sciences (Biology, Chemistry, and Physics) and hope to one day share that joy with my own students"

Liam Veazey '16 is a true student athlete. He excelled in the classroom as a double major in Political Science and History and a double minor in American Studies and Environmental Studies. He is a member of the Duns Scotus Honor Society, the Honors Program at the College, and the Political Science (Pi Sigma Alpha) and History (Phi Alpha Theta) Honor Societies. Liam was also active in the St. Thomas More Pre-Law Society, Model United Nations, and Student Athletics Advisory Committee. On the athletics side, he was captain of the St. Francis College Water Polo team and made it to two NCAA Final Fours. Veazey also set a College record on the Swim team in the 400 Individual Medley. Liam will teach English in Thailand after graduation before applying to graduate school to study Environmental Law. He hopes to influence environmental policy with a focus on climate change adaptation and community resiliency building. He also wants to expand beyond his role as a youth water polo coach and "interact with young people as an educator and community organizer."

(More on those hats)

Rep. Peter T. King '65 was born in Manhattan and raised in Queens. He graduated from St. Francis College in 1965 and the University of Notre Dame Law School three years later. He is a lifelong resident of New York and has lived in Nassau County for almost 50 years.

Congressman King is currently serving his twelfth term in the U.S. House of Representatives. He is a member and former Chairman of the Homeland Security Committee and Chairman of the Sub-Committee on Counterterrorism and Intelligence. He also serves on the Financial Services Committee and Permanent Select Committee on Intelligence. Congressman King has been a leader in homeland security and is a strong supporter of the war against international terrorism, both at home and abroad.

During his years in Congress, Rep. King has attained a reputation for being well-informed and independent. Following the ravages of Superstorm Sandy, Rep. King led the successful fight in Congress to obtain $60.4 billion in emergency funding for the victims of the storm.

Rep. King is a strong supporter of law enforcement and the U.S. military and has fought hard to bring veterans' benefits into the 21st century. Congressman King is also a strong supporter of funding to combat deadly illnesses such as breast cancer and prostate cancer. He has also received the AARP's Legislative Leadership Award for combating elder abuse and exploitation.

Prior to serving in Congress, Pete King was elected to three terms as the Comptroller of Nassau County. Before serving in county government, Rep. King had extensive experience as a practicing attorney and civic leader. He began his political career in November 1977 by winning election to the Hempstead Town Council. Rep. King is a member of numerous civic organizations including the Knights of Columbus, Knights of Pythias, AMVETS and the Fighting 69th Veterans Corps.

Rep. King and his wife, Rosemary, reside in Seaford. They have two adult children and two grandchildren.

Deborah Schwartz is President of the Brooklyn Historical Society, a nationally renowned urban history center, founded in 1863. In her role as President of BHS, since 2006, she has overseen the growth of a robust oral history program and a vast offering of educational services, including a partnerships with the Brooklyn Navy Yard; a ground-breaking project about the history of Abolition in Brooklyn, in collaboration with Weeksville Heritage Center and Irondale Ensemble Project; and she initiated the innovative project, "Students and Faculty in the Archives" designed to help college faculty develop compelling approaches to learning from archival documents. BHS has received numerous awards for these programs, including the prestigious Oral History Association Elizabeth B. Mason Project Award in 2015. Brooklyn Historical Society's current initiatives include standing room only public programs focusing on issues of racial equity and social justice.In late 2016, BHS will open a satellite museum in the Empire Stores Building in DUMBO that will focus on a history of the Brooklyn Waterfront.

Ms. Schwartz, a recognized leader in the field of museum education, teaches a graduate seminar on museum management for NYU's Museum Studies Program, and frequently lectures at Columbia University Teacher's College and Bank Street College of Education. She has held workshops on museum leadership in China and the Ukraine. She previously served as Deputy Director for Education at the Museum of Modern Art, curated the critically acclaimed exhibition, Art Inside Out for the Children's Museum of Manhattan and was Vice Director for Education and Program Development at the Brooklyn Museum.

She has published articles on working with teens in museums, public discourse and community building, and contributed to the Pew Center for Arts & Heritage publication, Letting Go? Sharing Historical Authority in a User-Generated World.