Skip to main content
Upload Proof of Vaccination
Reminder: All students, faculty, and staff must be fully vaccinated against COVID-19 and upload proof as a condition of accessing College buildings (including the residence hall) during the 2021-2022 academic year.
Honors & Awards
January 21, 2014

The valedictorian for the January class is Rania Joudeh, a Math Education major with a perfect 4.0 GPA. Rania transferred to St. Francis from Kingsborough Community College after a fortuitous meeting between her father and St. Francis President Brendan J. Dugan '68. During their conversation, President Dugan suggested that Rania contact him directly to learn more about the College. She says she was a little hesitant sending an email to the president of a college, but she did and was introduced to Lisa Randazzo in the Office of Admissions. "Lisa did all she could to make transferring as easy as possible, she's amazing," said Rania.

Rania also points to Education professors Richard Giaquinto and Peter Leibman '71 and Mathematics professors Erez Shochat '97, Eric Malijan and Arthur DiClementi '66 for their support, inspiration, and patience during her time at St. Francis. Joudeh will be teaching next year at I.S. 228 David A. Boody in Gravesend, Brooklyn while also going to graduate school to earn her Master's degree and possibly a Ph.D. She says she also may one day go back to school to take up another one of her passions, Accounting.

Assistant Dean of Freshman Studies Monica Michalski ’01 delivered the Commencement Address. Michalski is tasked with the crucial role at St. Francis College of helping new students adapt and adjust to life in college. Under her tutelage, the Department of Freshman Studies has succeeded in raising retention rates for students, in part because of the mandatory course, SFC 1001. SFC 1001 is a one credit course that teaches time and stress management, success strategies, how to search for a major and a career, as well as where to get help while at St. Francis. Michalski also oversees Project Access which is designed to nurture and support academically underprepared freshmen by putting them on a realistic path to academic success. 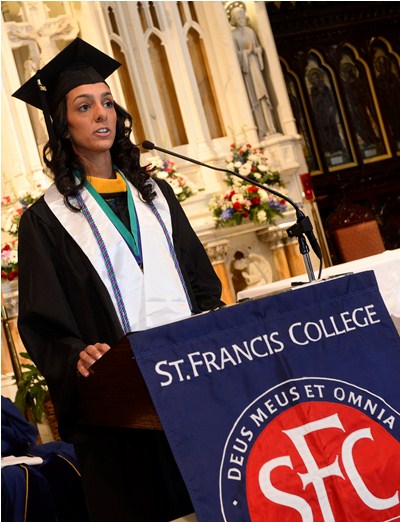 Bro. Owen Sadlier received a long, heartfelt ovation upon receiving an Honorary Degree in celebration of his retirement. He taught at St. Francis for 15 years in the Department of Philosophy and Religious Studies and mentored countless students during that time, offering them pieces of his seemingly endless knowledge and boundless kindness.

Before commencement, the College hosted a Baccalaureate Mass at St. Charles Borromeo. Director of Campus Ministry Fr. Brian Jordan, OFM delivered the Homily while President of the St. Francis Alumni Association Joseph Hemway ’94 welcomed the newest alumni to the family.

Among the students who graduated are:
Georgia Sullivan ’14 was a Biology major. She is now studying for the MCATS and will begin applying for medical school. During her time at St. Francis, Georgia conducted research with Biology Professor Steven Lipson on using natural substances to fight deadly stomach viruses. That work was recently published in the Journal of Medicinally Active Plants

Mohammed Ali ‘14, a Communication Arts Major, is going straight from graduation to the ZenithOptimedia Media Trainee Program, an important stepping stone in landing a job with the marketing company. At St. Francis, Ali was president of the Make a Difference club, treasurer of the Student Government for 2 years and worked in Special Events, helping out various departments including Student Activities, Career Development, and Freshman Studies. Ali earned four awards at last year’s student recognition event, the Bene Merenti Award (for biggest improvement in GPA), the JFK/MLK award for participation in activities, the Emerging Student Leader award, and the Franciscan Spirit award. “I loved my time here,” said Ali. “I found a small community environment in a big city, met great people, made great friends, and found great mentors.”

Slavica Stefanovic ’14 was a member of the St. Francis Women’s Volleyball team for two years. A transfer student from Belgrade, Serbia, Slavica helped form the core of a team that won the second most games of any Terrier team in the past nine seasons. With a 3.9 GPA, a major in Communication Arts, and a minor in Business, Slavica is heading to Paris to earn a Master’s Degree at the Sorbonne University. She was also a member of the Eastern European Club and says, “being an international student is not always easy, and the St Francis community helped me overcome cultural differences and made me feel at home. I am really happy I got to be a part of St Francis family and I am really thankful for all the support from my mentors, coaches, professors and peers.”

Those unable to attend commencement can now watch a full replay on the St. Francis website (www.sfc.edu) shortly after the event.