Skip to main content
Upload Proof of Vaccination
Reminder: All students, faculty, and staff must be fully vaccinated against COVID-19 and upload proof as a condition of accessing College buildings (including the residence hall) during the 2021-2022 academic year.
Academics
January 23, 2017

Worked for 15 Years at Alma Mater

An experienced CPA with an amazing ability to see the big picture and solve the small problems, June McGrisken '76 decided to put her skills to work helping her alma mater, St. Francis College, through a period of growth as well as economic challenges brought on by the recent recession.

Now, after 15 years at St. Francis, McGrisken is retiring to spend more time in Belle Harbor with her husband Ron, also retired, as well as her children and grandchildren.

Though she liked to stay behind the scenes, the College would not let McGrisken leave quietly. At a retirement party, President Timothy J. Houlihan presented her with the St. Clare Medal of Service in honor of her many years of dedicated service and leadership to the entire St. Francis community.

Board of Trustees Chairman John F. Tully '67 then announced that the College would name a classroom in her honor.

"You've been invaluable. You're not simply an accountant," said Tully. "You've been managing the finances of this place for so long, and so well, and to a great extent made our jobs easier." 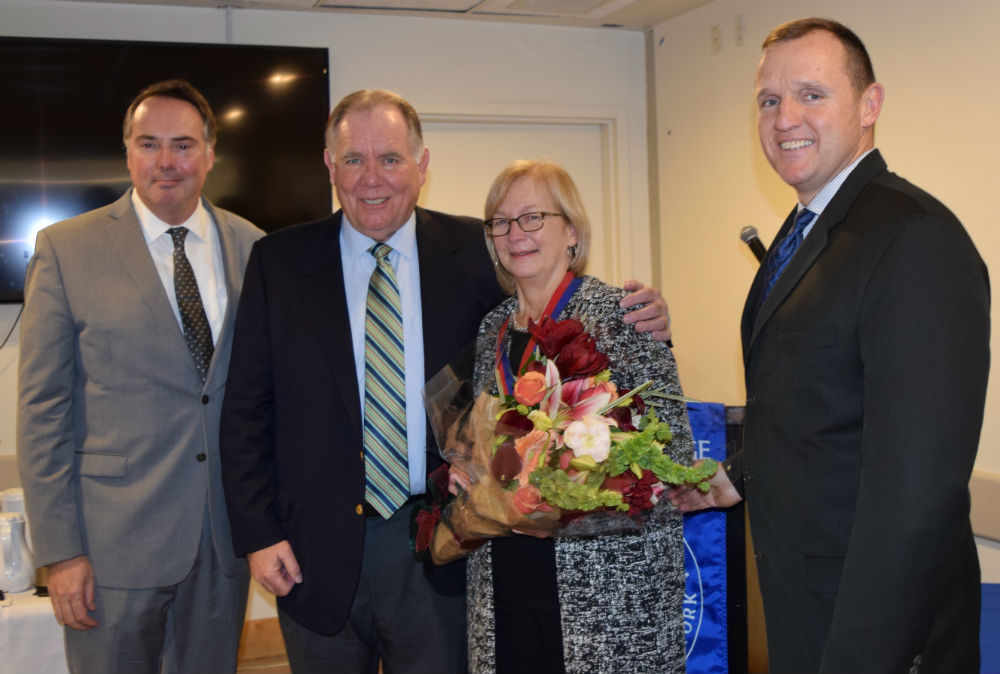 In addition, Kenneth Daly '88, President of National Grid New York, announced the renaming of a major partnership between the energy company and the College. The June McGrisken National Grid Scholarship and Internship is awarded every year to a St. Francis accounting student who excels in the classroom.

More than 100 St. Francis alumni have gone on to work at National Grid, including McGrisken, who worked at National Grid, formerly KeySpan Corp., in the areas of finance, accounting, treasury, human resources, and auditing.

McGrisken was a member of one of the first graduating classes to include women after the College became completely coed. She earned a Bachelor's Degree in Accounting, was a member of the Duns Scotus Honor Society, and was the first woman to receive the Alpha Kappa Psi award for the highest grade point average in business subjects. Her first job, as an accountant at Deloitte and Touche came immediately after graduation when she was interviewed by another St. Francis alumnus.

McGrisken returned to St. Francis in 2002 to lead Student Financial Services, after working at Polytechnic University (NYU Tandon School of Engineering) as Controller and Executive Director of Budgeting and Planning and earning an MBA in Finance from Fordham University.

In 2007 she was promoted to Vice President for Finance and Administration, in charge of Facilities Management, Finance, Human Resources and Institutional Research and Planning. Then in 2011 she was named Executive Vice President and added the responsibility for Admissions and Student Financial Services to her portfolio.

All her responsibilities combined meant that the financial health and budget of the college fell under McGrisken's oversight. Her contributions were well received and recognized as shown by the Alumni Association awarding her the 2010 Distinguished Administrator Award.

Taking care of the institution was more than a job for June since St. Francis College had taken care of so many members of her family. Her husband, Ron '80, sister Elaine '77 as well as her sons Ryan '10 and Daniel '10 are all graduates.

Those who want to thank June McGrisken for her years of hard work and devotion to St. Francis College can contact the Development Office at 718.489.5361 to make a donation in her honor.