The maintenance is scheduled to take place on the following days: June 21, June 22, July 11, July 13, August 1, August 3, August 16, and August 17. If you experience any problems accessing any of these applications during these dates, please understand the application may be down for migration. SFC IT will be sending out notifications when systems are back online. Thank you for your support and patience during this process.
Academics
April 27, 2016

The biggest fundraising event of the year for St. Francis College honoring Domenick A. Cama (Investors Bank) and Joseph K. Collins (Collins Building Services, Inc.) delivered on its promise, raising more than $1.5 million for scholarships at the 55th Annual Charter Award Dinner on April 27 at The Lighthouse at Chelsea Piers. Nearly $900,000 was donated to the Robert J. McGuire Scholarship at St. Francis College, the scholarship drive of the evening, with half coming from a matching challenge commitment from the Fred and Judy Wilpon Family Foundation.

WNBC Newschannel 4 Anchor and Reporter David Ushery was emcee of the evening; the second time he has come out to support St. Francis for the Charter Award Dinner in this capacity.

Honoree Domenick A. Cama, Senior Executive Vice President & Chief Operating Officer, Investors Bank, was introduced by two of his children, Victoria '12 and Michael '10, both of whom graduated from St. Francis College. He told the audience that he knows from first-hand experience that "a St. Francis College education prepares its students to meet their future challenges," adding "St. Francis alumni and students are some of the most hardworking, ambitious and caring individuals I have ever met."

Cama expressed how grateful he was to be able to provide a quality education for his children and said Investors Bank would like to do the same. He announced the Investors Bank Community Service Scholarship, a $100,000 endowed scholarship fund which will support four students annually who excel in the classroom and in serving those in the community who are less fortunate.

In his emotion filled speech, honoree Joseph K. Collins, President and Chief Executive Officer, Collins Building Services, Inc., said that it was St. Francis alumnus Peter Callahan '63 who helped him start his business, which has grown from just seven employees to more than 3,000. He also apologized to Fred Wilpon for being a diehard Yankees fan. 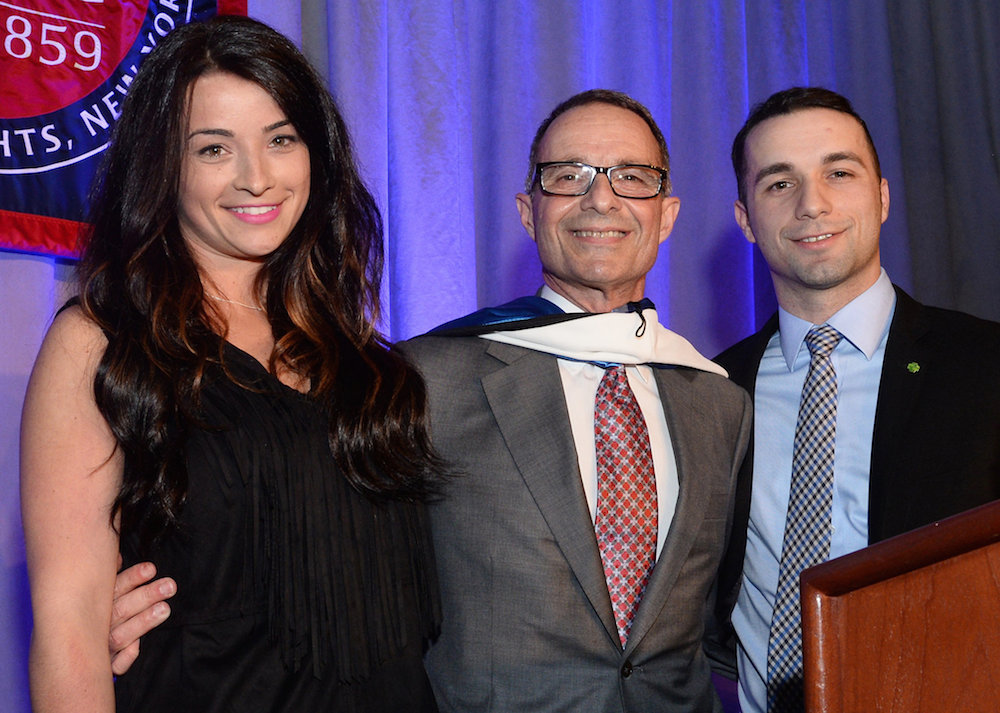 Both Mr. Cama and Mr. Collins were honored with an Honorary Doctor of Humane Letters for their service to the community. They then demonstrated further proof of their commitment by encouraging donations to The Robert J. McGuire Scholarship, a new scholarship that began offering awards to students last fall. The scholarship emphasizes diversity and is awarded to students from underserved communities with a preference for students who attend schools including Cristo Rey Brooklyn, Cristo Rey New York, Truman High School, and the Harlem Village Academies, or belong to organizations like the Police Athletic League (PAL) and the Jackie Robinson Foundation. All donations are matched dollar for dollar by the Fred and Judy Wilpon Family Foundation.The first meeting between Rocky, the St. Francis mascot and Mr. Met at this dinner celebrated this partnership.

Thirty students received the McGuire Scholarship last year, including Miasia Kinloch '19 who spoke at the dinner. Miasia was raised in Jamaica, Queens by her grandmother and aunt. She said their unconditional love and support helped her combat her insecurities about her parents and being bullied at school. She first came to St. Francis College to attend the Sista-2-Sista Youth Empowerment Summit hosted by Gye Nyame Empowerment Project (GNEP) and found the College provided a supportive environment. "If it wasn't for the kindness of my friends or all of you here tonight it would not be possible for students like me to end up at an institution on time," said Miasia. "Having a full scholarship has allowed me to put tireless energy into my school work."

Four other McGuire Scholarship recipients, Danielle Francavilla, Pierra Clemons, Nicholas Cava, and Daimond Clark also talked about the impact the scholarship has had on their lives. 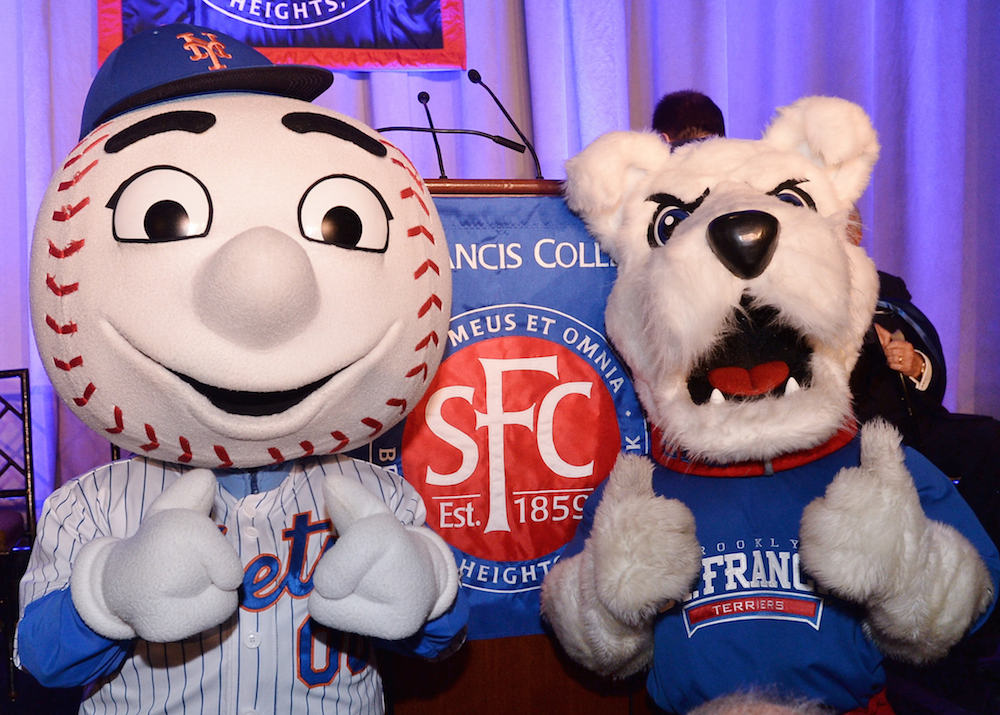 The Charter Award Dinner began in 1962 by the St. Francis Board of Trustees to commemorate New York State granting the College a charter and the right to confer diplomas, honors and degrees. For 54 years, the Charter Award Dinner has been the College's premier fundraising event and has raised millions of dollars to support scholarship programs and further the educational mission at St. Francis.

About the Honorees
Domenick A. Cama was appointed Chief Operating Officer (COO) of Investors Bank effective January 1, 2008 serving as the Bank's primary operating officer.On January 1, 2011 he was appointed to the Board of Directors. In his role as COO, Mr. Cama works closely with other members of the executive management team to manage the daily operations of the Company. He also works with the Bank's Board Members and Chief Executive Officer in setting and implementing the strategic direction for the company.

Prior to 2008, he served as the Bank's Chief Financial Officer (CFO). During his tenure as CFO, Mr. Cama had primary responsibility for the Company's successful conversion to a publicly traded stock company. Most recently, the Company completed one of the largest capital raises for a publically traded thrift – raising over $2.2 billion. 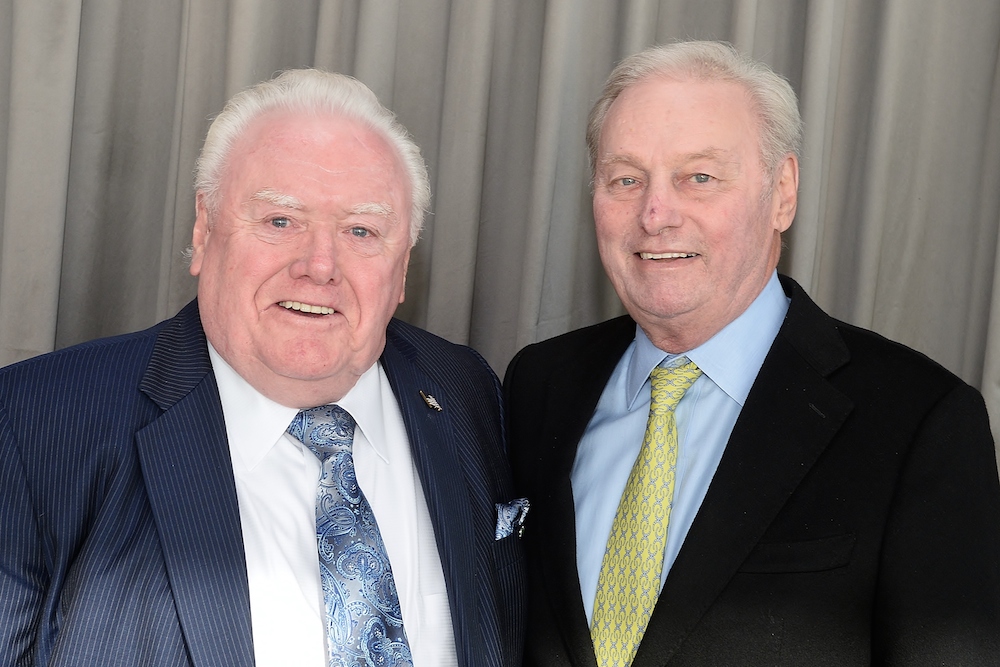 The Bank's outstanding level of performance was recognized as one of the top 25 performing, publicly traded, small-cap banks in the U.S. on Sandler O'Neill's "Bank & Thrift Sm-All Stars" report for three consecutive years beginning in 2011.

Investors was included on Fortune's "Top 100 Fastest Growing Companies" list in 2012 and was also named on Forbes' "Best Banks in America" list for three consecutive years beginning in 2012.

Domenick has served as the Essex County Heart Walk Survivor Ambassador for the American Heart Association, as well as acted as the organization's media spokesperson and was the key speaker at many of their New Jersey events. In 2011, Mr. Cama was recognized by the Raritan Bay Medical Center Foundation as Executive of the Year and was honored by the Center for Italian and Italian American Culture (CIIAC) as the Man of the Year. In addition, he was recently honored by The Federation of Italian – American Organizations (FIAO) as the Man of the Year and was the recipient of the 2014 Shuey Horowitz Humanitarian Award from HomeSharing.

Mr. Cama serves on the board of directors for the Madison YMCA, the Raritan Bay Medical Center Foundation and the CIIAC. Mr. Cama holds a Bachelors degree in Economics and a Masters degree in Finance from Pace University. Domenick is a Brooklyn native and currently resides in Northern New Jersey with his wife, Wendy, and has three children.

Joseph K. Collins
With an outstanding reputation in the building maintenance industry and 24 years of hard work, Joseph K. Collins founded Collins Building Services, Inc. In the last 27 years, Joe and his CBS family has grown the tri-state area company into an industry leader, employing over 2,000 full time employees.

Born and raised in Queens, Joe attended high school there and after graduating began his career in service as a Sealtest Milkman. Joe served in the United States Army until 1959, and after being honorably discharged he returned to work for Sealtest while taking evening classes at Baruch College.

Joe forged his reputation in the NYC building service industry by serving as President for several commercial maintenance companies. In 1988 he assembled an elite team and founded Collins Building Services, Inc. CBS has proven itself as the best vehicle for Joe to express his dedication to service, his leadership by caring and his consistent generosity -- excellence in service to his clients, his community and his family has been his guiding principle throughout his life.

Today, as Joe remains at the helm of CBS, he is active in several other professional and volunteer endeavors. He is a long standing Allied member of the Building Owners and Managers Association (BOMA). Joe also serves on several nonprofit boards including: Outreach Project, the Clark Gillies Foundation and The Thomas Hartman Foundation for Parkinson's Disease Research.

His service to organizations has earned him well deserved recognition and awards, including the Covenant House Lifeline Humanitarian Award, the Outreach Project Award, and Grand Marshall of the Rockville Centre St. Patrick's Parade benefiting Project Children, the Boomer Esaison Foundation and the Friends of Rockville Center 911 Memorial Foundation. Joe also finished as a finalist in the Ernst and Young Entrepreneur of the Year Awards Program. He has garnished Honoree accolades from Telecare, Christa House and the annual Sisters of St. Joseph Gala. He continues to be a strong supporter of the Sisters of Saint Joseph, St. Francis College Scholarship Fund, the Cure for Sure for Parkinson's research and the Swing for the Cure for Pancreatic Cancer Research.

Joe resides in Plainedge, New York with his loving wife of 51 years, Peggy.