Skip to main content
Upload Proof of Vaccination
Reminder: All students, faculty, and staff must be fully vaccinated against COVID-19 and upload proof as a condition of accessing College buildings (including the residence hall) during the 2021-2022 academic year.
January 7, 2015

St. Francis College is pleased to host the 2015 Winter Commencement for College graduates from the past summer and fall semesters at St. Charles Borromeo Church on Wednesday January 14, beginning with a Baccalaureate Mass at 2:00pm, followed by the Winter Commencement Ceremony at 3:00pm. 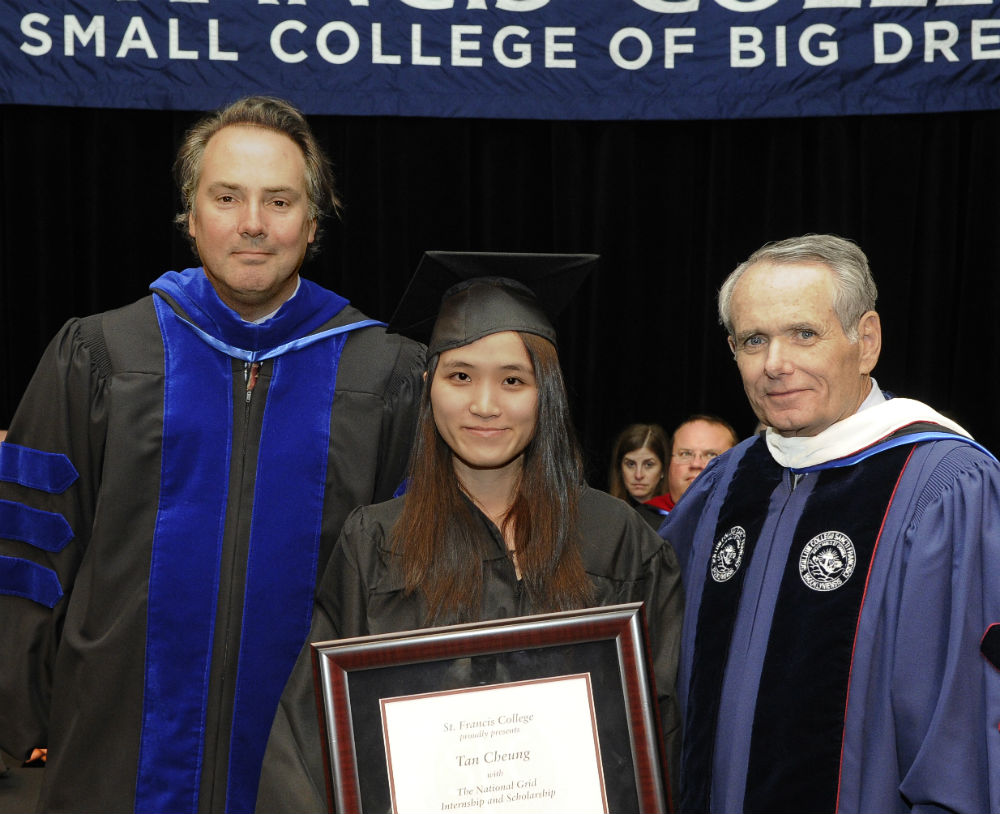 The valedictorian for the January class is Tan Cheung, a Hong Kong native who graduates with a Bachelor’s and Master’s Degree in Accounting. Tan transferred to St. Francis from Seattle after learning about the College’s small size and window to the New York job market. “Because of the small classrooms, you can get closer to the students and professors,” said Tan. “I could ask them about anything, not just course work. They helped me a lot with questions about jobs and internships too.”

Tan earned the National Grid Scholarship and Internship, working for a year and half in their Capital Markets division. She was also a member of the Accounting Society and Asian Culture Club. She is now studying to take the CPA exam and looking for a job in the accounting field.

Bro. William Boslet, OSF ’70, the Superior General, Franciscan Brothers of Brooklyn will offer the opening Invocation while Bro. Geoffrey Clement, OSF, a History Professor at the College will offer the Benediction.

Among the students graduating in January are:

Abraham Oxilas is a Biology major with hopes of becoming a Physician’s Assistant or Doctor of Osteopathy. He is already a certified EMT and is studying for his MCATs and GREs as he weighs his options on where to apply for medical school. A graduate of St. Francis Preparatory Academy in Queens, Abraham co-founded My Brother’s Keeper Service Organization at St. Francis College in 2011. The group has now spread to other area campuses, including LIU. Abraham also has worked for several years in the College’s Office of Development.

“There is a family vibe here. Everybody knows everyone,” said Abraham. “If I have a problem, I can go to anyone. At a bigger university, I may have missed on some opportunities that I have here."

Rosalia Badalamenti graduates with a degree in Childhood Education. She currently works as a Teacher Assistant in the after school program at Mary McDowell Friends School in Brooklyn, an institution which focuses on children with disabilities. She hopes to begin working as a substitute teacher for New York City Public Schools. Rosalia was President of the Education Society and Kappa Delta Pi International Honor Society in Education. She also worked for the Education Department where she developed strong bonds with several Education professors.

“I’ve wanted to be a teacher since I was very young. I remember tutoring all the kids in my neighborhood,” said Rosalia. “At St. Francis, when I learned about Early Childhood Education, I knew this is where I wanted to be. It’s not about the money. It’s about being happy and helping young children.”

Those unable to attend commencement will be able to watch a full replay on the St. Francis website (www.sfc.edu) shortly after the event.