Skip to main content
Upload Proof of Vaccination
Reminder: All students, faculty, and staff must be fully vaccinated against COVID-19 and upload proof as a condition of accessing College buildings (including the residence hall) during the 2021-2022 academic year.
Academics
December 23, 2013

NYSE Welcomes SFC Center for Entrepreneurship to the Trading Floor

The St. Francis College Center for Entrepreneurship got a jump of the holidays by ringing the Closing Bell at the New York Stock Exchange on Monday, December 23.

The Center for Entrepreneurship plans to be on the leading edge of the burgeoning Brooklyn business community; helping to teach, guide, and support new and young businesses while instilling the idea of social entrepreneurship in the next generation of entrepreneurs.

“Anyone looking to start a business or who already has one will be able to come to us to get the tools they need to be successful.” said Dennis Anderson, Chair of the Department of Business Management and Information Technology and Executive Chair of the new Center. “They’ll learn things like which banks provide funding and who to contact, where to get legal advice, and how to take advantage of pro-bono services.”

“Ringing the bell at the New York Stock Exchange is an announcement to the world that you are a productive member of the business community,” said St. Francis College President Brendan J. Dugan ‘68. “The fact is our small college in Brooklyn Heights has had two feet firmly planted in this world for decades through our countless, successful alumni.”

President Dugan is one of those success stories. A graduate of the Class of 1968, he spent forty years leading a number of institutions in commercial banking, most recently as Chairman & CEO of Sovereign Bank’s Metro NY/NJ Division. Mr. Dugan became President of St. Francis in 2008. He was recently named to the Board of Directors of Investors Bank. 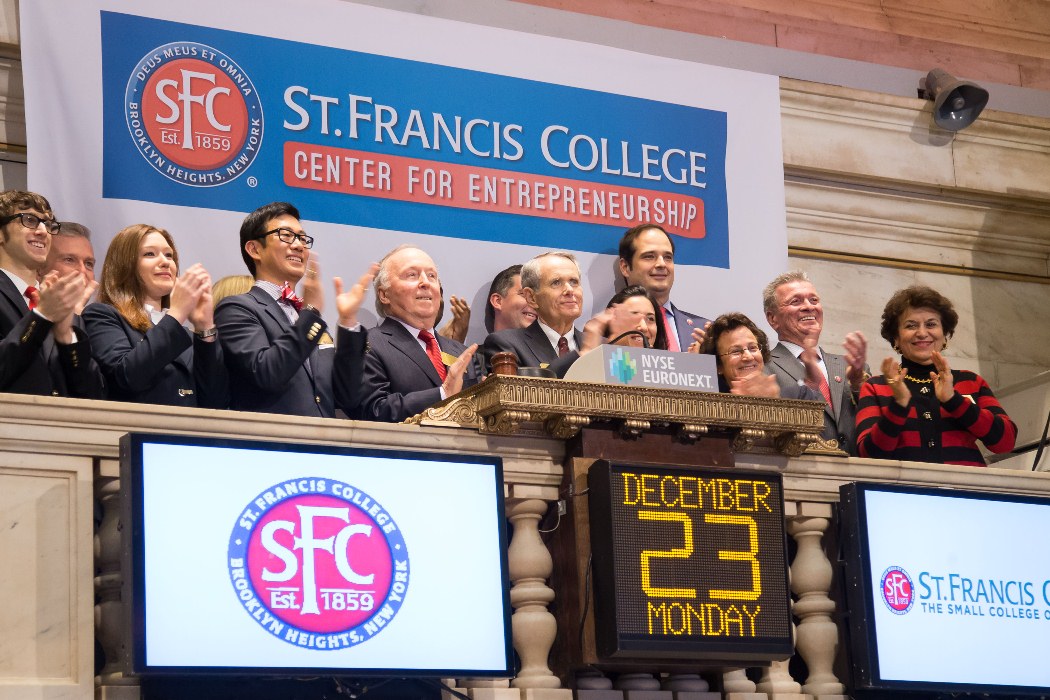 St. Francis College and NYSE have had direct connections for a number of years. A steady stream of undergraduate students has held internships there while alumnus Louis Pastina ’79 is Executive Vice President of Operations, NYSE US Cash Market.

St. Francis has also partnered with NYSE to offer post-baccalaureate academic credit and train teachers how to educate students on the financial marketplace and its importance in their lives and the global economy.