The maintenance is scheduled to take place on the following days: June 21, June 22, July 11, July 13, August 1, August 3, August 16, and August 17. If you experience any problems accessing any of these applications during these dates, please understand the application may be down for migration. SFC IT will be sending out notifications when systems are back online. Thank you for your support and patience during this process.
Academics
November 29, 2016

Twice as many Terriers donated four times more money for Giving Tuesday, November 29, than last, raising more than $115,000 on a day when St. Francis College asks the community to give back. 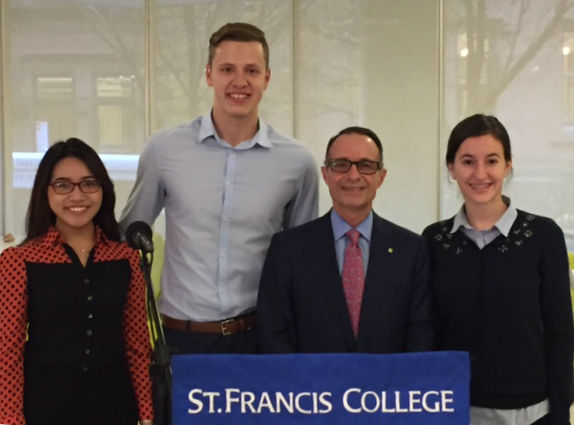 This was the second year St. Francis participated in Giving Tuesday, and while heavy rains stopped the planned walk-a-thon to Brooklyn Bridge Park it did not put a damper on people's generosity. More than 400 people donated to the College's annual fund which supports need-based and merit-based scholarships for students from all economic brackets and all ethnicities - giving them access to an excellent private college education. The Annual Fund also supports technology enhancement, library resources, athletics and so much more.

In partnership with Investors Bank, the college dedicated a portion of the day to celebrating students and student groups that have gone above and beyond for the College and the greater community. Investors Bank recently endowed The Investors Bank Community Service Scholarship to provide awards annually on Giving Tuesday to students who have made community service an integral part of their lifestyle. The first recipients of this award are:

Stefan Ivanovic '18, a junior Economics and Business Management double major who volunteered at the New York City marathon and organized a food bank collection in his home country of Montenegro,

Quynh Dang, a junior Accounting major who volunteers with a number of organizations including; New York Care, the Vietnam Heritage Center, CHIPS Food Pantry and Homeless Shelter and several others,

Arhontisa Sartzetakis '19, a sophomore who founded the College's Girl Up chapter of the United Nations, is a member of the Girl Scouts, and helped organize the Annual Greek Independence Day Parade,

David Cordova '18, a junior Communication Arts major who organized and promoted Alimoe Memorial Day in Harlem, volunteered at the Atlantic Antic and is a member of Build On Foundation, which cleans parks, operates soup kitchens and arranges nursing home visits.

In addition to these awards, the College also acknowledged the following student clubs: the Make a Difference club, the LGBTQ club and Zeta Gamma Delta sorority.

Giving Tuesday also included a spin class at Cyclinsanity Fitness in Rockville Centre on Long Island and a pizza party on campus with giveaways and a photo booth. Throughout the day many posted their photos using Snapchat geofilters and on Facebook, Twitter, and Instagram.