Skip to main content
Upload Proof of Vaccination
Reminder: All students, faculty, and staff must be fully vaccinated against COVID-19 and upload proof as a condition of accessing College buildings (including the residence hall) during the 2021-2022 academic year.
In the Spotlight
April 1, 2020 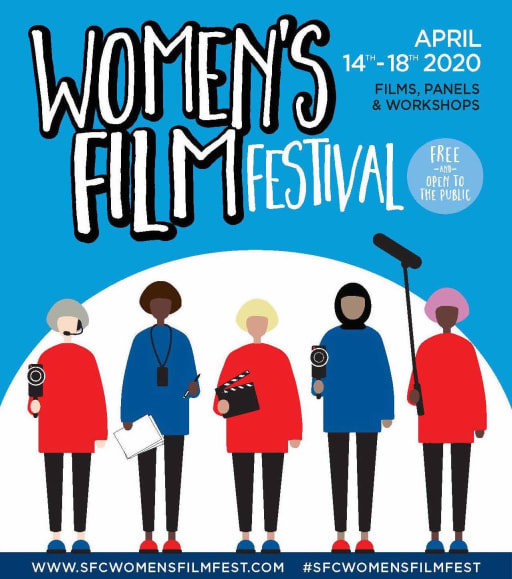 The Festival will feature workshops - Crowdfunding and The Art of the Pitch - for filmmakers from Festival sponsor Seed & Spark, panels, Q&A sessions, and screenings that celebrate women's achievement in the moving image. All events will be accessible via Zoom video conferencing.

The festival's keynote speech, Storytelling Gets Us Through The Shit: How Filmmaking Can Create Your Future, will be delivered by storyteller from the future Karen Palmer.

Palmer will reference pop culture and classic movies in a talk about how filmmaking gives us insight into the human psyche during a time of crisis and inspires audiences to create the future they want. Palmer has been featured in WIRED magazine and is best known for her work Riot, which uses immersive video and AI to take each viewer on a unique narrative journey.

The Festival will screen 44 short films created by women - on topics ranging from immigrant lives to demented rabbits, ass-kicking 80 year-old women, sleepwalking through the Sunflower Revolution, fractured fairytales and kaleidoscopic animation - that will compete for 8 prizes, which include memberships from event sponsor IFP, New York's premier organization for independent filmmakers.

Most films selected for Festival screening are directed by women. To qualify, a film must have a woman in a significant behind-the-camera role, including by serving as writer, producer or editor. The Festival received 286 submissions and the roster of selected films come from 15 countries, including Germany, Turkey, the United Kingdom, Estonia, and Myanmar.

St. Francis College students enrolled in a class taught by Augusta Palmer, Ph.D., Associate Professor of Communications Arts, created and are running the Women's Film Festival for the first time this year.

"It's been a highly experimental process this year, and that only intensified with the college going online," said Dr. Palmer, in reference to St. Francis College moving all its courses online and cancelling all on-campus activities for the remainder of its spring semester. "But the students and I are working hard to adapt to a new festival environment."

The Women's Film Festival is a collaboration between the St. Francis College Communication Arts Department, the college's Center for Entrepreneurship, its Women's and Gender Studies Minor and the office of the College's Academic Dean.

The festival is a community partner of the Athena Film Festival at Barnard College, who hosted SFC students for various events from February 27th-March 1st, 2020. The Festival has also partnered with the Zonta Club of Brooklyn, and is sponsored by Hassenstein Design, Seed & Spark and IFP.

Stay tuned to the Women's Film Festival's social media and website for specifics on how to access the programs, which will all be free and open to the public.