The maintenance is scheduled to take place on the following days: June 21, June 22, July 11, July 13, August 1, August 3, August 16, and August 17. If you experience any problems accessing any of these applications during these dates, please understand the application may be down for migration. SFC IT will be sending out notifications when systems are back online. Thank you for your support and patience during this process.
Academics
April 28, 2009

More than 250 people gathered at the Plaza in Manhattan for St. Francis College's 48th Annual Charter Award Dinner, which honored John A. Catsimatidis, the Chairman & CEO of Red Apple Group. The event, which took place on April 28th, raised over $400,000 to support scholarships for St. Francis students.

Mr. Catsimatidis, who also received an honorary doctorate from St. Francis College, gave an inspiring account of his life story, which epitomizes the American dream. A native of Greece who immigrated to West Harlem as an infant, he grew up as a "small fry with big dreams." Armed with a tireless work ethic, Catsimatidis rose from his humble beginnings to oversee an empire that includes holdings in the grocery, oil refining and aviation businesses that employ over 8,000 people and exceed $4 billion in annual revenues. 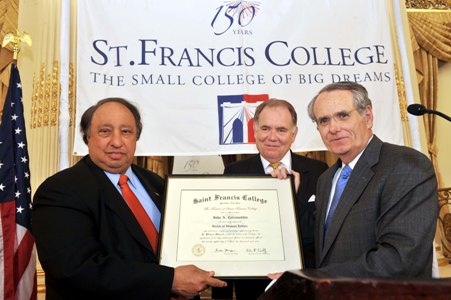 Mr. Catsimatidis also embodies the College's Franciscan values of service to community. He has been a major supporter of Outward Bound and research on Juvenile Diabetes, Alzheimer's and Parkinson's diseases. He has also championed religious freedom worldwide.

"Considering his remarkable achievements and dedication to make our world a better place, St. Francis College was truly delighted to have the opportunity to bestow the Charter Award on John Catsimatidis," said Brendan J. Dugan '68, president of St. Francis College. "It is also poignant that in doing so we were able to raise money for scholarships for our students, most of whom grew up in circumstances similar to Catsimatidis' and share his drive to succeed."

In addition to his participation in this year's successful Charter Award Dinner, Mr. Catsimatidis also established a scholarship fund at St. Francis that will help future students achieve their dream of earning a college degree. The scholarship fund will be named in honor of the Catsimatidis family.