Skip to main content
Upload Proof of Vaccination
Reminder: All students, faculty, and staff must be fully vaccinated against COVID-19 and upload proof as a condition of accessing College buildings (including the residence hall) during the 2021-2022 academic year.
Academics
December 3, 2012

The St. Francis College Men's Water Polo season capped it's most successful season ever with a dominating performance over Air Force in the consolation game at the NCAA Final Four Sunday, December 2. (Watch video highlights) 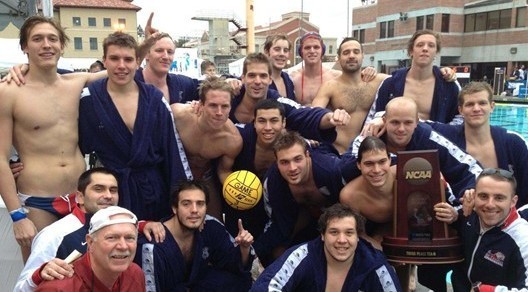 Behind stellar goalkeeping by junior Igor Mladenovic (16 saves) and an offense that spread scoring around to seven players, the Terriers won 14-8 and clincehd the third place spot at the Final Four. It's the first match the men have won in three trips to the Final Four.

Mladenovic made 16 saves including a penalty shot and earned a spot on the All-Tournament First Team.

The men were victorious out of the water too as sophomore David Lonnberg earned the Elite 89 award for academic excellence. Lonnberg, majoring in Political Science, holds a 3.968 GPA. The Elite 89 is presented to the student-athlete with the highest cumulative grade-point average participating at the finals site for each of the NCAA's championships.