The maintenance is scheduled to take place on the following days: June 21, June 22, July 11, July 13, August 1, August 3, August 16, and August 17. If you experience any problems accessing any of these applications during these dates, please understand the application may be down for migration. SFC IT will be sending out notifications when systems are back online. Thank you for your support and patience during this process.
Student Life
December 19, 2013

A constantly changing landscape, both home and abroad, has made for a vexing two terms for President Barack Obama and has tested his leadership in ways no past president could imagine. Two St. Francis College scholars Dinesh Sharma and Uwe Gielen, take a hard look at President Obama’s Leadership in their new collection of essays, The Global Obama: Crossroads of Leadership in the 21st Century (Routledge).

Professor Gielen, Founder and Executive Director of the Institute, co-edited the book which captures cultural, historical and political analyses from writers, journalists, psychologists, and social scientists. As a progress report, this is the first book that tries to grasp ‘the Obama phenomenon’ in totality, as perceived by populations around the world with special focus on America's leadership.

Sharma and Gielen have offered presentations on The Global Obama around the world and close to home, speaking at conferences in South Africa and Hawaii as well as at Columbia University, Marymount Manhattan College, and York College. The authors delve into ideas like President Obama’s efforts to shape the relationship between the United States and China and how his early socialization in the Asia-Pacific region helped prepare him to tackle global problems.

The Global Obama can be ordered online through Psychology Press at http://www.psypress.com/books/details/9781848726260/. 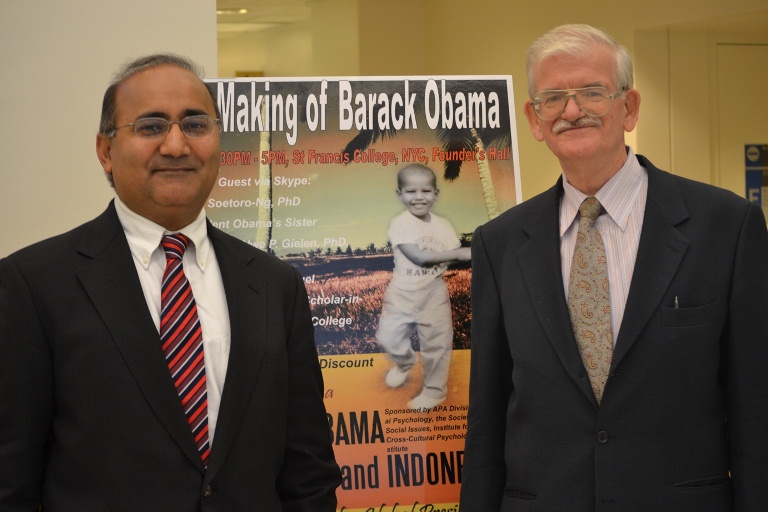 Dinesh Sharma is a regular columnist for Asia Times Online, and a contributor to Al Jazeera English, Eastern Eye, News Blaze and many other news websites. He has consulted in the healthcare industry for almost ten years for Fortune 500 clients, and has authored or edited six books and hundreds of peer-reviewed, scientific as well as journalistic articles. His other books or monographs include: Psychoanalysis, Culture and Religion (2013/forthcoming); Human Technogenesis: Cultural Pathways through the Information Age (2004); Childhood, Family and Sociocultural Change in India (2003); Socioemotional Development Across Cultures (1998). He earned a Master’s degree in Clinical Psychology from Loyola University and a Doctorate in Human Development and Psychology from Harvard University.

Uwe P. Gielen has edited of some 20 books including (with Roy Moodley and Rosa Wu) Handbook of Counseling and Psychotherapy in an International Context (2013), (with Ramadan A. Ahmed) Psychology in the Arab Countries (1998/2008), (with Michael Stevens) Toward a Global Psychology: Theory, Research, Intervention, and Pedagogy (2007), and (with Jefferson M. Fish and Juris G. Draguns) Handbook of Culture, Therapy, and Healing (2004). He has lectured in 33 countries on topics related to International Psychology and has served as president of the Society for Cross-Cultural Research, the International Council of Psychologists, and the International Psychology Division of the American Psychological Association. He earned a Master’s degree in Psychology from Wake Forest University and a Doctorate in Social Psychology from Harvard University.

The Institute for International and Cross-Cultural Psychology (IICCP) sponsors research and publications in international and cross-cultural psychology; promotes, develops, and implements workshops, symposia, lectures, and conferences at St. Francis College; involves students in cross-cultural research and the institute’s programs; fosters a sense of involvement in the cultural richness of the St. Francis College community; and creates network ties with other interested psychological institutions in the USA and abroad. Between 1998 and 2011 the Institute supported the writing and editing of numerous publications in international psychology including 15 books that have appeared in 5 countries.