Skip to main content
Upload Proof of Vaccination
Reminder: All students, faculty, and staff must be fully vaccinated against COVID-19 and upload proof as a condition of accessing College buildings (including the residence hall) during the 2021-2022 academic year.
Diversity & Inclusion
April 10, 2017

The Importance of the Spoken Word - Building a Better Argument

For a generation that has replaced words with emojis, the spoken word is still the most powerful way to make a point. On April 10, 2017, three students used their powers of persuasion to earn $1,200 in prize money at the College's Annual Delaney Speech Contest.

The $500 first prize went to Kaelin Garces who spoke about self-confidence and the struggle to overcome depression.

Second place ($400) was won by Eris Doble who talked about her immigrant experience coming to the United States from the Philippines when she was 13. Third place ($300) went to Sarah Innamorato who spoke about LGBT history. 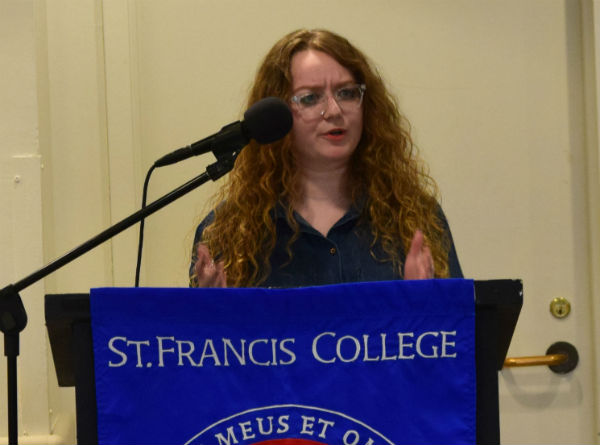 More than a dozen students in all participated in the speech contest this year. In addition to the winners, other speech topics included: same-sex marriage, closing Rikers Island prison, and racism.

The event is organized by St. Francis Communication Arts Professor Timothy Dugan and judged by a panel of St. Francis professors.

The Delaney Speech Contest is named for Francis Delaney, a St. Francis College Speech Professor during the 1950's and 60's who made it his mission to "cure" St. Francis students of their Brooklyn accents to help them get ahead in their careers. Delaney donated money to the school to help keep alive the fading art of persuasive speech.

"While the contest is named after Delaney, we no longer try to cure students of their accents," added Dr. Dugan. "Instead our focus is on turning our students into solid communicators, both orally and through the written word."