Skip to main content
Upload Proof of Vaccination
Reminder: All students, faculty, and staff must be fully vaccinated against COVID-19 and upload proof as a condition of accessing College buildings (including the residence hall) during the 2021-2022 academic year.
Academics
January 30, 2018

This Is a Time for Us to Be Bold - President Martinez-Saenz Lays Out Vision for St. Francs College

A CALL TO ACTION AT INAUGURATION OF ST. FRANCIS COLLEGE
PRESIDENT MIGUEL MARTINEZ-SAENZ

In a deeply personal address with anecdotes about his family and an exploration of the mission of college education in the modern day, St. Francis College President Miguel Martinez-Saenz laid out an ambitious plan setting the College on a path of growth and transformation.

The speech, What the World Needs Now – A Cosmopolitan Vision for St. Francis College, delivered Saturday, January 27th, was the centerpiece of ten days of inaugural events celebrating the installation of Dr. Martinez-Saenz as the 19th President in the College's almost 160 year history. (Watch the Full address / Watch What The World Needs Now)

With a first benchmark set for 2022, Dr. Martinez-Saenz said the College will now begin to raise transformational resources, grow strategic partnerships, and increase enrollment by 500 students to a total of 3,000, including 300 international students.

"This is a time for us to be bold," said President Martinez-Saenz. "I believe firmly that the next generation of leaders has to be educated differently than in years past. And of significance, world leaders need to emerge from different parts of the globe."

Growth will be focused on areas including Education, with the addition of Special Education and English-as-a-Second-Language programs; a doubling of Accounting, Finance, and Entrepreneurship students; and an increase in the number of students enrolled in Health Care related majors. The College also plans to grow graduate programs as well as the College's offerings of online and hybrid courses.

President Martinez-Saenz says significant investments in campus facilities will be visible, with the addition of informal spaces for students to gather; a reimagining of the library to better suit college students including the many commuters at St. Francis; updated classrooms; and places to feature arts and music. This will help the College take advantage of its position in the heart of a vibrant Brooklyn creative community.

For Athletics, whose student-athletes are some of the most academically successful students at St. Francis, President Martinez-Saenz committed to improving facilities, as well as the quantity and quality of student-athletes. The goal is to make all teams as competitive as Men's Soccer with its three conference championships in four years and as academically successfully as Women's Basketball which led the nation in GPA in 2016.

Focusing on What The World Needs Now, he stressed the importance of being good to others and of leading by example.

"Sometimes we think it's heroic when someone volunteers on a Saturday at a homeless shelter," said the President. "In my view, the real heroes are those that imagine and work to implement a world where homeless shelters are unnecessary." 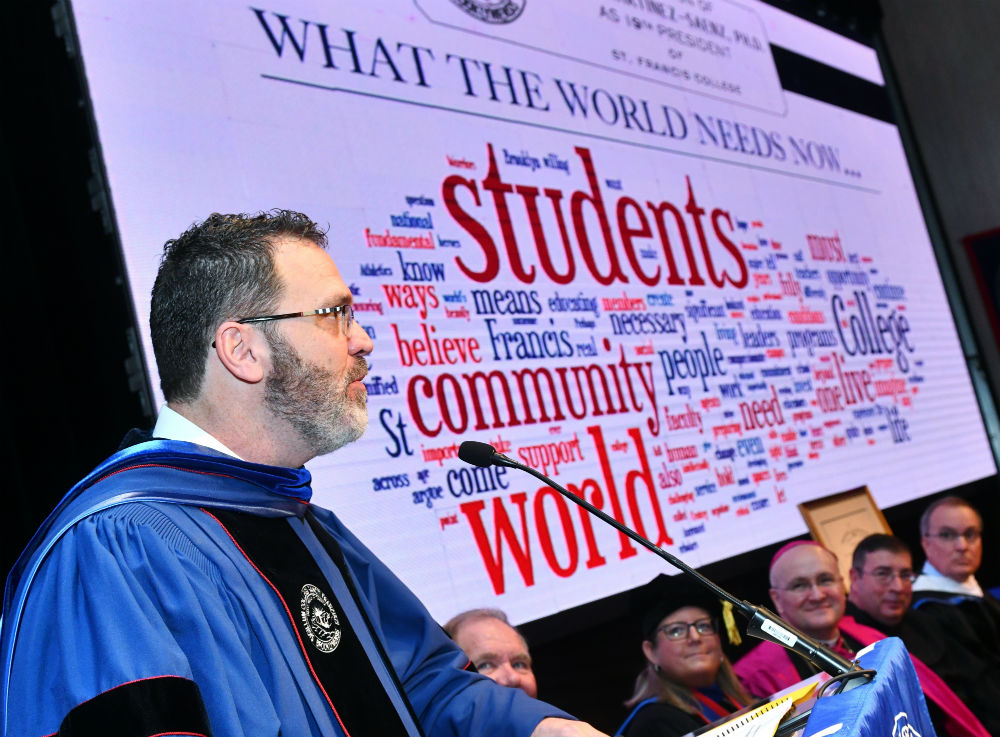 Looking at the College's position, "in the heart of the world's most culturally, socioeconomically, religiously, ethnically, and racially diverse city in the world," President Martinez-Saenz envisions a world-class institution where, "educating its students in the midst of the cacophony and chaos of an urban center is the only way to prepare students for life in the 21st century."

He said it's "an opportunity that will require bold risk taking and it's not for the faint at heart."

Concluding his address, President Martinez-Saenz said, "I believe what the world needs now more than ever are living examples of people who strive to live lives of love and service to themselves and to others."

"I believe sincerely and optimistically that St. Francis College can be a living example of what it means to strive to live in a beloved community."

"I can only hope that I will find the courage and the fortitude to do my part to guide us at this point in the College's history so that we may be beacons of hope for all those that choose to come here and even those beyond."

The address was the finale to ten days of inaugural programming. Previous events included the Inaugural Mass, held Friday at St. Charles Borromeo Church with The Most Reverend James Massa, Auxiliary Bishop, Diocese of Brooklyn, as the principal celebrant and homilist.

On Thursday, hip-hop and spoken word artist Bryonn Bain performed his gripping and provocative show, Lyrics from Lockdown, an emotional journey of music, song, and multimedia that sparked intense reflection and discussion among St. Francis College students, faculty, and administrators. Bain combined cello, bass, beat box and a DJ with video, stunning imagery and the true-life struggles of people wrongfully convicted to shed light on the injustices that still exist in our legal system.

Earlier events included a Day of Mentorship with Big Brothers Big Sisters of NYC, Cristo Rey Brooklyn High School, NYC Urban Ambassadors, and Kiskeya Sport. In the spirit of hospitality, the students were led by St. Francis College students, administrators and faculty on a rotation of hands-on activities in our Nursing and Science labs, as well as in the HDTV Studio and classrooms.

International Flag Day, hosted by Brooklyn Borough President Eric Adams, featured flags from around the world in what became a public art exhibition just outside Borough Hall, representing the diversity within St. Francis College and the entire Brooklyn community. Inaugural events began with a nod to President Martinez-Saenz's Cuban-American heritage and the serving of Cubano sandwiches and other cultural foods for lunch and an early dinner to St. Francis College students, staff, and faculty.

For photos of the various events, please go to sfc.edu/inauguration.