The maintenance is scheduled to take place on the following days: June 21, June 22, July 11, July 13, August 1, August 3, August 16, and August 17. If you experience any problems accessing any of these applications during these dates, please understand the application may be down for migration. SFC IT will be sending out notifications when systems are back online. Thank you for your support and patience during this process.
Honors & Awards
March 3, 2016

St. Francis College welcomed new Scholar in Residence Joan Millman (former State Assemblywoman) for the first in a series of special events on March 3, 2016, a symposium on Women in Government.

The talk was moderated by Millman and featured State Assemblywoman Jo Anne Simon and State Senator Roxanne Persaud. The symposium was part of the month-long celebration of Women's History Month at the College. 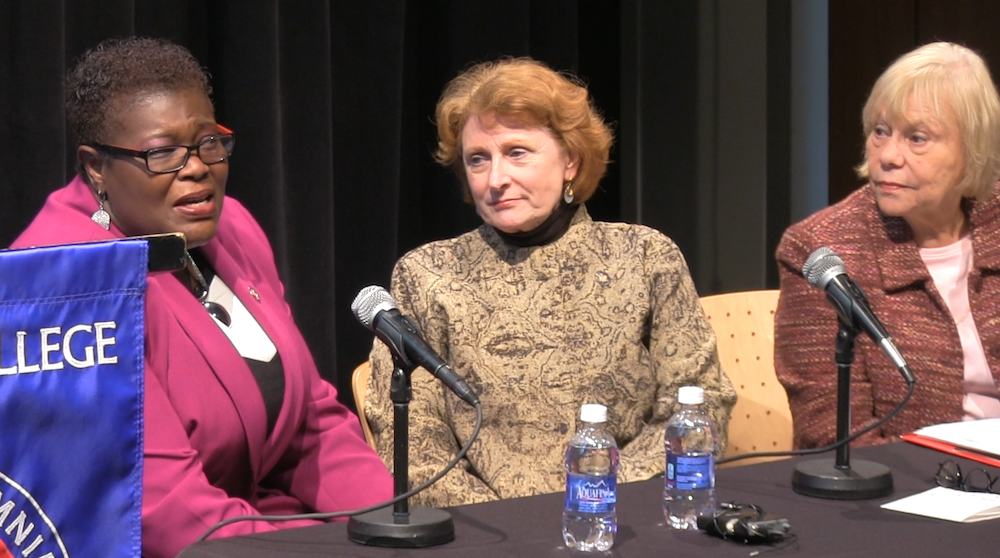 Assemblywoman Jo Anne Simon grew up in a working class neighborhood in Yonkers and was the first in her family to attend college. Jo Anne graduated Iona College with a Bachelor's Degree in Communication Sciences, Gallaudet University with a Master's Degree in Education of the Deaf, and Fordham University School of Law, where she earned her law degree at night while working full-time. After stints as a judicial law secretary and teaching in Hofstra University School of Law's clinical program, she established a disability civil rights law firm in Downtown Brooklyn. Jo Anne is a nationally recognized expert in her field whose work has been featured in the New York and National Law Journals. Jo Anne is also an adjunct Assistant Professor of Law at Fordham. She has lived in Brooklyn since 1981 and has previously served as President of the Boerum Hill Association and chaired its Traffic & Transportation, Land Use, and Atlantic Yards committees. Jo Anne was a Founder or Co-founder of numerous organizations including the Downtown Brooklyn Coalition, BrooklynSpeaks.net, Council of Brooklyn Neighborhoods, Friends of Douglass/Greene Park; Hoyt-Schermerhorn Task Force, Association on Higher Education And Disability (AHEAD) where she is also general counsel, and the Downtown Brooklyn Traffic Calming Task Force. She chaired the Gowanus Community Stakeholder Group and Gowanus Expressway Community Coalition. Jo Anne is a member of the ARISE Coalition, which seeks to improve educational and life outcomes for NYC's children with disabilities. She is also the former President of Everyone Reading, Inc.

State Senator Roxanna Persaud was elected to the State Senate in November 2015 after serving in the State Assembly. Prior to being elected to the State Legislature, Roxanne spent many years as a Higher Education Administrator including as Registrar at St. Francis College. In addition, she is a longtime advocate for the community. She served as President of the 69th Precinct Community Council in Canarsie, a member of Community Board 18 and Commissioner on the New York City Districting Commission. She also is a graduate of the NYPD Citizens Police Academy as well as, the New York City Office of Emergency Management-Community Emergency Response Team. Additionally, she was a member of Community Action Board of the New York City Department of Youth and Community Development and Chairperson of the Neighborhood Advisory Board - District 18. She also serves on organizations highlighting domestic violence and cancer awareness among others. She has also traveled overseas on several occasions as a volunteer on medical and social outreach programs.

Roxanne was born in Guyana, South America and migrated to the United States with her parents and siblings. She is a graduate of Pace University from which she holds a Bachelor of Science and Master of Science in Education Administration.

In the Senate, Roxanne's legislative priorities for the District include safer communities, affordable housing, funding for schools and libraries, supportive services for youth and senior and quality healthcare.

Roxanne lives in the Canarsie section of the 19th Senatorial District.