Skip to main content
Upload Proof of Vaccination
Reminder: All students, faculty, and staff must be fully vaccinated against COVID-19 and upload proof as a condition of accessing College buildings (including the residence hall) during the 2021-2022 academic year.
In the Spotlight
June 18, 2019 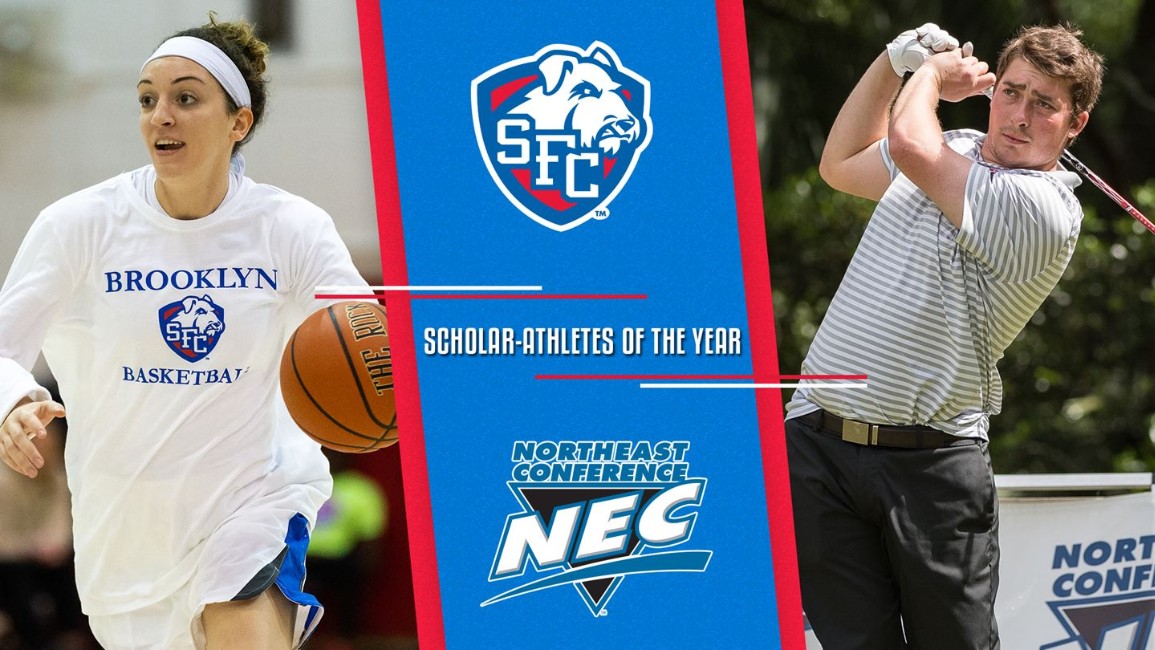 SOMERSET, NJ – The Northeast Conference (NEC) announced today that St. Francis College Brooklyn women's basketball's Dana DiRenzo and men's golf's Nick Nemergut have been named 2019 NEC Scholar-Athletes of the Year. DiRenzo was one of four female student-athletes in the NEC to receive the honor, while Nemergut was one of three males to earn the award.

DiRenzo and Nemergut were the only female/male duo from any institution in the NEC to take home the prestigious accolade this year. Robert Morris' tandem of Lacee Collins (softball) and Samantha Lackner (women's soccer) marked the only other institution to have multiple Scholar-Athletes of the Year. It is the first time since 2014-15 that the Terriers have had a pair of NEC Scholar-Athletes of the Year. In 2014-15, Katie Fox (women's basketball) and David Lonnberg (men's water polo/swimming & diving) claimed the awards.

DiRenzo was a four-year member of the women's basketball team and served as a team captain for her junior and senior years. She earned Co-Valedictorian honors at the St. Francis College 2019 Spring Commencement and completed the five-year BS/MS combined degree in four years.

"It is such an honor to be named an NEC Scholar-Athlete of the Year – I am extremely grateful for the experiences and opportunities that playing basketball at St. Francis has provided me. The past four years have been filled with so many great memories, and I will always appreciate my amazing professors and coaches who served as mentors to me along the way. I truly value the education I received at St. Francis and am very thankful and humbled to be receiving this award," said DiRenzo

The Hammonton, NJ native tallied a perfect 4.0 GPA throughout her collegiate career, and at the annual Athletics Awards Banquet, she was named the 2018-19 Female Scholar-Athlete of Year. DiRenzo appeared in 96 games and made 30 starts for the Terriers over the course of her four years on Remsen Street. She scored 233 points and grabbed 285 rebounds as a Terrier.

"We would like to congratulate Dana on being named the Northeast Conference (NEC) Scholar-Athlete of the Year. This accomplishment is another well-deserved honor for her as she has maintained a perfect 4.0 GPA throughout her collegiate career. Dana has and will continue to make the St. Francis College community proud and we wish her continued success in her future," said women's basketball head coach Linda Cimino.

Nemergut received his undergraduate degree in the spring of 2018 from St. Francis and has continued his collegiate career in the graduate program at the college. He also compiled a perfect 4.0 GPA as an undergrad and was tabbed the 2018-19 Male Scholar-Athlete of Year at the Athletics Awards Banquet.

"When I found out that I was one of the NEC Scholar-Athletes of the Year, I was absolutely amazed. I was caught off guard in awe that I had earned this achievement. St. Francis College holds a spot deep in my heart for giving me the opportunity to compete in golf at the collegiate level along with providing me the chance to better myself academically and earn a degree. The support of my professors, teammates, and coach were what truly helped make this possible as they all wanted me to succeed and propel myself in all that I do. Thank you all so much for giving me a chance and for those that helped make this dream a reality," said Nemergut.

He was a model of consistency for the Terriers on the course and wrapped up his athletic career in great fashion as he recorded a top 15 finish at the 2019 NEC Men's Golf Championship. At the three-day tournament, he carded a 232 (+16) to tie for 15th-place. He registered an 81 (+9) in the first round of play and then recorded his best score of the tournament with a 74 (+2) in the second round.

"I've coached Nick Nemergut for the last three years and have watched him develop tremendously as a golfer. I and all the members of the golf team, congratulate Nick on being awarded the NEC Scholar-Athlete of the Year for 2019. Nick approaches his studies with the same energy and can-do spirit that he brings to each practice and every competition," said men's golf head coach Mike Carney.

In its 13th year, the NEC Scholar-Athlete of the Year award, which is sponsored by the league's Faculty Athletic Representatives, goes to the male and female student-athletes who have exhausted their athletic eligibility, graduated and compiled the highest grade point average in the conference at the conclusion of the academic calendar.