Skip to main content
Upload Proof of Vaccination
Reminder: All students, faculty, and staff must be fully vaccinated against COVID-19 and upload proof as a condition of accessing College buildings (including the residence hall) during the 2021-2022 academic year.
Student Life
April 21, 2008

MAAC Championship Offers Path to the NCAA Div I Finals

The women, behind their two top scorers, sophomores Andrea Dolnay (Budapest, Hungary) and Thalita Paladino (Boca Raton, FL) and senior goalie Brittany Ryburn (West Hills, CA), will face off against top seed Iona. The Terriers have played Iona tough this season, losing by a total of just four goals in their past two meetings. 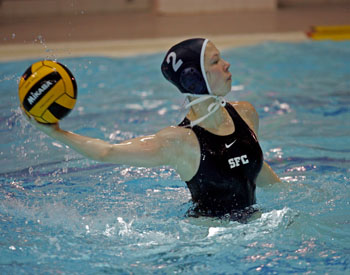 The team's success is due in large part to the efforts of Head Coach Srdjan Mihaljevic, who played for the St. Francis Men's Water Polo team before becoming coach of the women and Coach Jessie Gunderson, who played for Harvard's Women's Team and led the New York Athletic Club team to a national championship. The two have spent the last several years working to recruit a diversity of players from around the country and the world. The team now boasts 15 women from five countries and 6 states.

In the water, Dolnay, a pre-season All-MAAC First Team selection and winner of an Offensive Player of the Week award, led the team with 49 goals this year. Paladino finished with 36 goals.

Outside of the pool, the women are equally as impressive. Each of the past two seasons, the team has been ranked academically in the top 10% nationally of all water polo teams.